Shutter Island: Where Nothing Is What It Seems... OR IS IT? 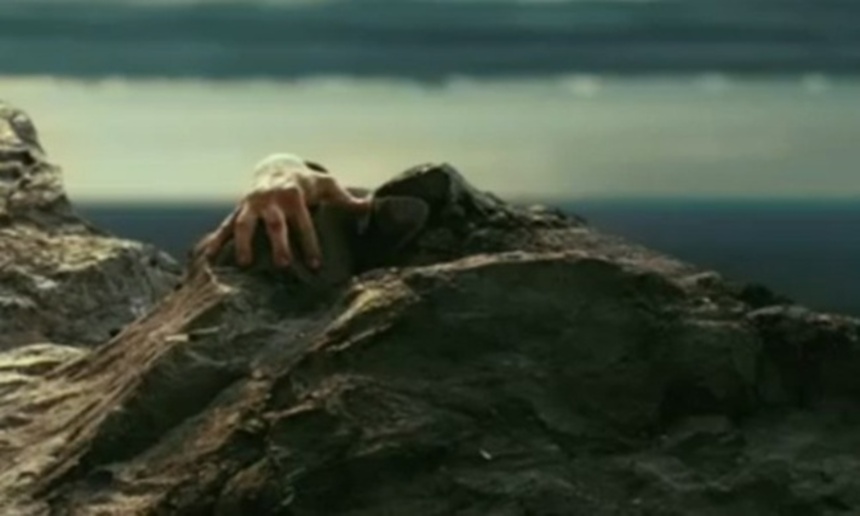 Martin Scorsese's SHUTTER ISLAND introduces us to Teddy Daniels (Leonardo DiCaprio,) a U.S. Marshal in 1954, as he's ferried to an island off the coast of Massachussetts to solve a missing person's case. That person, Rachel Solando, we soon discover, is a violent criminal, who's escaped her cell at the impenetrable insane asylum on the island. "It's as if she evaporated straight through the walls," notes sinister (or is he just British?) head doctor Cawley (Ben Kingsley.) As Teddy digs deeper into the circumstances of Rachel's escape, questions pile up, until the inevitable one is raised: who's really the insane one on Shutter Island? The patients? The doctors? The detective himself? Or maybe it's Scorsese who's mad - for attempting to turn such a loony potboiler into high art.

Of course, Marty's pulled that trick before, and his latest is a lot like his last foray into genre filmmaking, CAPE FEAR, an homage to thrillers that was more fun than it was truly terrifying. Just as DeNiro's oversized Max Cady in CAPE FEAR was a figure of almost comic rage in service of a larger rumination on redemption, the few shit-yourself-jolts in SHUTTER ISLAND are secondary to the overall function of the piece. But even if SHUTTER doesn't have you on the edge of your seat, it has you fully in its grasp, with expert pacing and performances (Patricia Clarkson, Jackie Earle Haley, and Ted Levine deserve mention for their one-scene-a-piece roles,) and several vivid Technicolor dream sequences. But what makes SHUTTER ISLAND so enjoyable over all, is Scorsese's unflinching commitment to the device of the Red Herring: the misdirect. His film is an island of misdirects, and Scorsese deals them like a practiced card sharp. By leading his audience down so many paths, to so many different possible conclusions, Scorsese does just what twist-aholic M. Night Shyamalan wouldn't: he doesn't build a story around delivering its ultimate "gotcha!" reversal. This isn't SIXTH SENSE gimmickry. It reveals itself to be something much grander: the detective story as character piece. Bit by bit, Teddy Daniels comes into focus, even as plot strands dead end in his search for objective truth. The final twist, then, isn't so much a plot twist as it is a final, full picture of a character. And that picture is a haunting one. But hey, if the climax of SHUTTER ISLAND doesn't work for you, perhaps you owe it to yourself to go back and watch THE VILLAGE again. Enjoy that.

Though Scorsese is far from home off the Massachusetts coast, he's not gone far thematically, and SHUTTER ISLAND is actually a refreshing return to self-reflection, following the amoral romp THE DEPARTED, a film full of highly-entertaining kills, with a minimum of meditation on them. In this asylum for the criminally insane, however, Marty's found himself an ideal setting for a study of the brutality that's defined his career. Is violence the ultimate logic - a gift from God himself - as one character puts it? Or is violence simply madness - and are all those who commit it, if they're not mad already, driven irreversibly mad by it? It's a potent question, and one the director addresses here with care, if not subtlety. By flashing back to Teddy's experience as a G.I. liberating the Nazi concentration camp of Dakau, Scorsese places his drama squarely in the Film Noir tradition of the combat veteran-turned-detective, the man who's seen the depths of human depravity at war, returns to the beat, trusting no one, and rightfully so. But instead of hardening his protagonist's view of mankind, violence has the opposite effect on Scorsese's detective: not steeling, but unraveling. Teddy trusts no one - but to his own detriment. It's a compelling take on an archetypal character, that, if not unprecedented (Oh MEMENTO my MEMENTO!) is still fascinating in the hands of a master.

The other Noir trope that Scorsese draws heavily upon here - too heavily - is the unreliable narrator. It's not a spoiler to say that the seeds of the ending are planted in the first moments of the film, because within sixty seconds of his opening title, Scorsese plays a card he should hold closer to the vest, cutting into Teddy's memory with images of his deceased wife (Michelle Williams,) and making it all too clear that her demise will be a key in the puzzle. Leo, for his part, plays Teddy too shaky from the start, projecting instability when a little more reserve in the film's first act could have built confidence in his perspective. One imagines what Mark Ruffalo, who plays Leo's partner, would have done with the role of Teddy - toning down the early twitchiness for a greater impact later. Ruffalo, though, acts as a perfect tonic to Leo in his secondary role. He gets the droll Dean Martin '50's lilt down pat, which makes Leo's inescapable Leo-ness slightly more believable.

Though SHUTTER ISLAND is something less than perfect, its effects are lingering, the questions it raises not easily dismissed. And the conclusion drawn by this brutal funhouse of a movie, ultimately, is a disturbing one: violence can't be undone. To put faith in human recovery in the face of sadism - either global, or personal - is to play a losing game. Once the crime's committed, the case can never be truly solved.