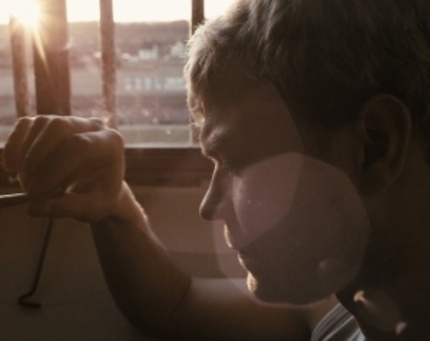 With all the (deserved) media attention "Un Prophète" has been getting you'd almost think it is the only prison drama worth watching this year. But even at the International Film Festival Rotterdam it wasn't isolated in its genre, as the Danish documentary filmmakers Tobias Lindholm and Michael Noer presented their first narrative feature film: a prison drama called "R"...

Yet though both films give a gritty and none-too-favorable view of prisons as gangster academies instead of as places for rehabilitation, their storylines have little in common.

While "Un Prophéte" tells the extraordinary tale of someone becoming a successful career criminal through his time in jail, in "R" the opposite is true. With disheartening realism Lindholm and Noer show the daily life in a high-security prison ward where for most newcomers the only way is down.

The young Rune is sent to jail for two years after a stabbing. He plans to spend his time inside as quietly as possible but from the moment he arrives he gets heavily bullied by the permanent residents. First and foremost of these is a career criminal called "The Mosen", who treats Rune as a personal slave and has him do his dirty work for him, both literally and figuratively.

Getting increasingly desperate, Rune discovers a way to secure some respect and safety for himself by solving a problem for The Mosen's "boss". But with this ploy, is Rune successfully blending in or has he just earned a brief respite from even worse treatment?

Right from the first shot onward the roots of directors Lindholm and Noer become apparent. As Rune enters the prison and is processed by the guards, it's almost as if you are watching a documentary on how prisons work. When you see how Rune is "processed" by the inmates directly afterwards this is no longer possible of course, but it's hard to shake the feeling that what you are watching is totally real and captured instead of directed.

A large part of this is due to both the location and the actors: "R" was filmed in Horsens, a real-life Danish state prison recently abandoned, and almost the entire cast consists of ex-convicts who spent serious time there. As such the speech patterns, attitudes and body languages seem uncomfortably real, and most of the film's tricks concerning the building's unique architecture (especially on how to smuggle stuff from point A to point B) are based on what really happened there.

It also looks like a documentary because Noer and Lindholm film everything as candidly as possible. No flourishes and flights of fancy here like in last year's "Bronson" although I do suspect some artificial color-desaturization took place (are Danish people really THAT grey?). Mostly the two directors let the prison's natural drearyness speak for itself.

In the midst of all this authenticity you have the main character Rune being played by one of the few non-ex-convicts in the film, and this unthankful task fell to actor Johan Philip Asbæk. The fact that he doesn't stand out as a "fake" speaks volumes about his talent. Rune is a thug going to jail for stabbing someone so it's hard to sympathize with him too much at the beginning, but the unrelenting (and unfair) bullying he is subjected to soon changes that. New prisoners are treated as fully disposable assets, especially those with short sentences, and they are forced to take the fall for any crime committed by the bigger fish within the prison.

Mind you, I don't think prisoners should have a happy-happy-joy-joy existence in jail. But I also think it is plainly wrong when the small-fry have to do most of the suffering while the truly evil bastards have carved out complete kingdoms for themselves. And that is exactly the situation shown here.

Maybe the most harrowing and borderline claustrofobic prison drama I have ever seen, "R" is even more disturbing when you realize this takes place not in some third-world banana-republic, but in a modern Western European country which normally has a reputation of being quite nice. The prisoners have some freedom and a cell of their own each, the guards are not overtly corrupt or sadistic, yet the place still has deteriorated into a little hell on Earth.

Even though its gloomy setting and crushingly bleak authenticity makes "R" a film that is at times hard to watch, it still is one of the best films I've seen this year at the International Film Festival Rotterdam.

The audience thought so as well, granting "R" a rating of 4.2 out of 5, placing it squarely within the top 10% most-loved films of the festival. It did not win a Tiger Award (it was nominated) but in audience reaction it bullied the crap out of most of the winners...