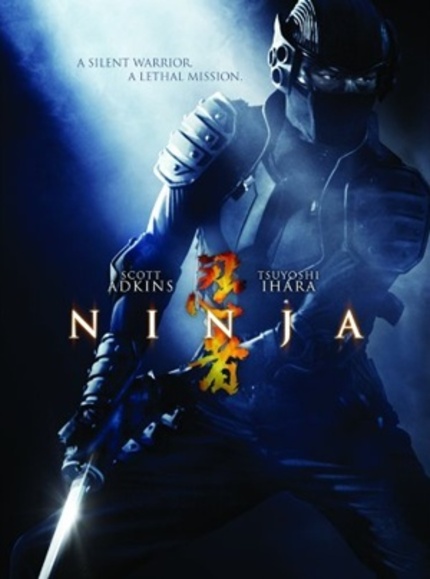 [Our thanks to regular ScreenAnarchy reader indiemaker for the following review of Isaac Florentine's Ninja.  If these are the results, keep the alcohol flowing!]

Please let me preface this review by admitting to the fact that I was completely lit when watching Ninja and I'm well on my way to a good buzz as I write this review.   I'd already gone through half a box of wine and just watched the confusing & convoluted Give Em Hell Malone before I popped in the DVD of Isaac Florentine's Ninja. But I think that going in drunk for this film might be a prerequisite for truly appreciating what it has to offer.

As soon as the awkwardly written prologue quickly scrolled across the screen too fast for my blurred vision to catch, Ninja cut to a dojo training montage with a cheap and gaudy title card that has to be seen to believed. Unless my hazy memory deceives me, the title flies across the screen like a shooting star complete with bad sound effects. Hell, even the giant silver font looked like it belonged in an 80's straight to VHS feature.

I was laughing before the movie even started. The first thing we see is Scott Adkins aka "white dude who's going to kick everyone's ass and get the hot Japanese girl," flexing his super toned muscles. It might have been the hooch, but the foley work here had me spitting Miller High Life all over my keyboard. You see, Scott Adkins is a super badass.  He's so ripped that when he moves, you can actually hear his muscles stretch like hardened leather.  I was preparing myself for American Ninja HD Redux when things took a change.

You see, Ninja is fucking awesome.  It's the trashy, fun, ass kicking guilty pleasure that Ninja Assassin was supposed to be. I don't write for AintitCool.com and I haven't had any studio execs hire celebrity whores to woo me into writing a positive review.  I'm not sure what film Capone saw, but I still regret wasting valuable Fantastic Fest time sitting around for James McTeigue's incompetent dung heap to end.

The action in Ninja comes fast, hard, and often.  Unlike the under lit, over edited mess of the previously mentioned turd, Ninja actually lets you see the fight choreography and it's quite impressive for a cheap, straight to DVD feature. That might not be so surprising when you realize that this is from the same man who helmed the cult DV favorite, Undisputed 2.

It should be noted that there are a few sequences that steal liberally from Zak Snyder. There's one fight sequence in particular that plays out like the bastard child of Seven Samurai, Sword of Doom, and 300 where the film's villain takes out an entire dojo clan.  For this one sequence, Florentine suddenly slows down and zooms into the action. It's nearly identical to 300 except that it's raining and the men are wearing yukata instead of cod pieces.   In defense, I'd rather have the ass kicking slowed down to savor rather than cut up to the point where it's indecipherable.

The story and acting is on par with Ninja Assassin which is to say, "It sucks."  In fact, I'm pretty sure the whole film was stolen from an episode of Batman: The Animated Series.  Look up Night of the Ninja; it's pretty much the same concept except the white guy here leaves Japan for New York rather than Gotham City.  But if you're renting this, well, I doubt you're looking for depth.

I give Ninja credit for at least being somewhat respectful to the art of ninjitsu.  Shit, at least they've got plentiful establishing shots that were filmed in Tokyo and New York.  There's still some bad green screen at work but for the most part, I believed I was watching something that actually took place in Japan and the U.S.  Again, more than I can say for Ninja Assassin.

I'm assuming the bulk of the cast here is Japanese American rather than actual Japanese, because it sounds like they're speaking Japanese phonetically. But I give the film kudos for going this route and having the characters speak Japanese when they're in Japan even if it may be stunted and awkward. There are plenty of other small details that show that the director and writer actually did some research and have an appreciation for Japanese history and culture although I was and am too drunk to remember what those were specifically.  I do know that none of this existed in Ninja Assassin. You could actually hear people roll their eyes when James Mctiegue told the audience that he'd done a lot of research for his film.  And by research he meant cocaine.

On another note, Scott Adkins is wearing a leather coat that is nearly identical to Hugh Jackman's in the X-Men and Wolverine pictures.  This was a bit distracting for a drunken fan boy.  I'm thinking maybe Isaac is hoping Fox will see this and let him make the "Wolverine goes to Nippon" flick.  I just want to throw it out there that I'm also available and a lot cheaper.

Ninja looks pretty damn good for its cost.  Excusing some shoddy CG blood and bad post dubbing, the sets and general art direction is surprisingly solid.  There's also some really silly shit like a cult of Russian assassins with a secret lair under New York who dress like they wandered off the set of The Warriors, but it's also kinda fitting.  Ninja is a lot better at balancing dark heavy action with high camp than Ninja Assassin.  While the film has a definitively cheesy 80's tone, it isn't patronizing, pandering, or obnoxious.  Ninja didn't feel like it's striving to be nostalgic, purposefully crappy entertainment.  How strange is it that an honestly stupid B-movie could feel so refreshing? ... Unlike some other upcoming films making big headlines. Cough. Cough. Machete. Cough. Robert Rodriguez. Cough.

All you really need to know is this, there's an elaborate brawl on a moving subway car where Scott Adkins kicks some Russian through a window. The guy flies out and is hit by another oncoming subway car.  I may have been sloppy drunk by this point, but I cheered loud enough to wake my roommate. She was not pleased.

So, get yourself a six pack, or box o' wine, or both.  Order some greasy Chinese takeout, call your friends over, and prepare yourself for a hellavu fun time.

Ninja is currently a Blockbuster exclusive as well as Give Em Hell Malone.  So unless you want to track down your old membership card and shell out the cash to rent it from the big B, it may be a while before you can see it elsewhere.

On a tandem note...If you haven't been to a Blockbuster in a while, I suggest you check one out.  I always avoided them like the plague until recently. In a desperate attempt to compete with Netflix while avoiding the addition of hardcore porn to their stores, Blockbuster has been getting exclusive rental deals with everyone, mainly in the realm of independent and foreign cinema.  Have you been wondering what the hell ever happened to Guy Maddin's My Winnipeg?  It's been a Blockbuster exclusive. They had DVDs of  the hit Korean thriller, The Chaser sitting on their shelves six months before its New York theatrical run.  They've had Pontypool, Brothers Bloom, Gomorrah, Che, and tons more months before they were made available to Netflix or even for sale.  So if you're wondering what ever happened to that great indie film you read about a year ago, it might be a Blockbuster exclusive. Yeah, I'm embarrassed to be promoting them in any way, but the exclusives they're getting are shocking and it's not being advertised anywhere.

[Thanks indiemaker! You have inspired a new rule here at ScreenAnarchy. From now on all reviews must be written while drunk!]

A lovely review and a pleasure to read. Thank you.

For NINJA being a low budget movie, you shouldn't expect big things. But I was quite surprised the movie was good except for the bad story that needed to be ironed out.

When I finally watched Ninja Assassin which I expected to be blow away.
It was a solid crap movie! It felt like a ninja movie for kids but rated 18 because of the gore and blood:/

NINJA is a recommended movie over Ninja Assassin, only thing I love about NA was Rain's moves, the guy can fight man.

I'm with Mark Pollard. Ninja Assassin was more enjoyable to me than Ninja.

Maybe my expectations were lower due to the hate for Ninja Assassin on Twitch, but it wasn't nearly as awful as reviews here lead me to believe... Nor as dark, makes me think some people need better glasses or perhaps some carrots ;p

I'll be sure to be drunk as well when I watch it. And probably stoned too courtesy of Sugar Hawaiin and a 6 foot tube.