Production begins on 'The Legend of Chen Zhen', but... 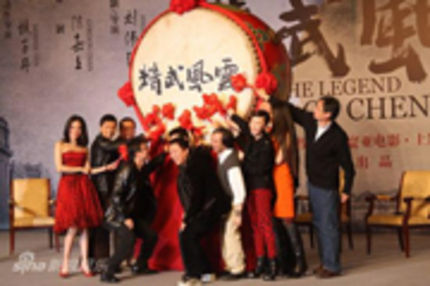 Production of The Legend of Chen Zhen began this week with the usual press conference launch on Sunday. Wu-jing.org has links to video on Sina [find that below] and promptly translated some of it for the rest of us who can't speak a lick of Cantonese but wish we did.

Donnie Yen will play the lead character, "I have played Chen Zhen on Fist of Fury TV series 15 years ago, so I'm particularly ambitious about this role. In terms of action, I have confidence of presenting a whole new Chen Zhen. I hope this will engender another wave of wushu trend, and hope for this to become a classic."

Excellent. We all know Yen's admiration for Bruce Lee and his previous experience with the role so we thought this film was heading in the right direction. Until...

Andrew Lau describes the main character as a superhero, one who is not only a master of martial arts, but will transform himself, taking up the onus of saving the entire city. And it will combine Donnie Yen style kungfu with special effects to create a superhero film. Gordon Chan says that this is not a remake, but a reinvention of the fictitious character.

Are they moving away from the more traditional films like Fist of Fury/The Chinese Connection and Fist of Legend? The words 'superhero', 'special effects' and 'reinvention' sound like it and it has me a touch concerned, for now.
Sign-In to Vote
Tweet 0 Submit

This works for me. It's tough to find a new take on the Chen Zhen story that hasn't been tackled yet. I'm content to let Andrew Lau run with it in the direction of superheroics as long as we end up with something that's more STORM RIDERS, less A MAN CALLED HERO and even less THE DUEL.