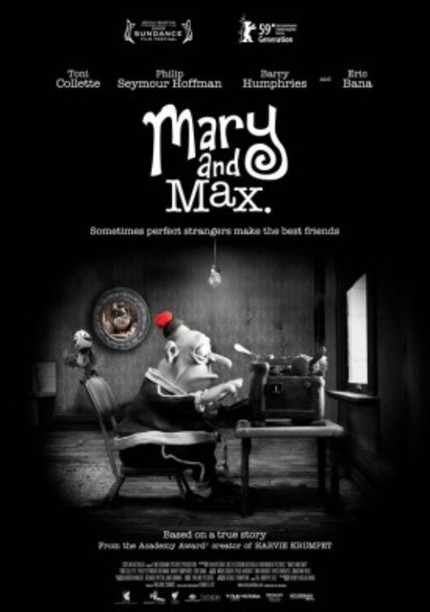 Fellow ScreenAnarchistss, take notice! This is not the first Mary and Max review, but the last one seemed to pass rather unnoticed. Don't make the same mistake twice!

Financially well-developed stop-motion films are hard to find. 2009 has been a good year though, with Selick's Coraline getting the most attention and Anderson's Mr Fox getting raving reviews all over. In the shadows of these films another one was made. One that's had a hard time getting commercial recognition but is every bit as good. And so I present to you, Mary and Max.

Mary and Max is a little Australian film that popped up on the radar rather unexpectedly. It's a rather dull title and doesn't really invite immediate investigation, but behind that somewhat boring literary façade hides a very rich and accomplished film. Mary and Max is obviously a work of love, but with the proper financial backup to turn it into a true marvel.

The film is a celebration of old-fashioned artistry. All the little characters were made from polymers, clay, plastic and metal and are hand-animated. Some of the settings took people more than two months to construct. I'm not going to spoil all the neat little stats, you can check the official Mary and Max website for that, but it's telling for the amount of work that went into this film.

Best of all though, the film is more mature than most of its peers. Coraline is a lovely fairytale and films like Wallace and Gromit are nice enough, but they are all a bit childish by nature. Mary and Max tells the tale of two lonely souls who find each other by accident. The 7-year old Mary writes to the 50-something year old Max for advice and they become pen palls. Mary's lack of confidence and Max' suffering from Asperger syndrome puts a big strain on their relationship and it doesn't take too long before they find out that having friends can be a painful experience.

Visually Mary and Max is probably the best thing ever conceived using claymation. Mary's world (a little village in Australia) is seen through a sepia filter, Max' (New York) is modeled in contrast-heavy black and white. The settings are superbly detailed and look grand. Character animation is smooth, the character style is adoring and the camera work earns a special mention. Though completely different in style I think it easily defeats Coraline.

The soundtrack is fun, quirky and with sudden dashes even emotionally touching. The film makes use of some commonly known musical pieces but knows how to put them in a new context. Voice acting is surprisingly strong too, with an almost unrecognisable Philip C Hoffman playing a big part in laying out the atmosphere of the film. Plenty of use of voice overs though, which might deter some people, though I didn't find it an issue at all.

The true beauty of Mary and Max lies in its smart balance of comedy and drama. The film has a rather dark edge and while many little facts and details are portrayed as funny, as the film progresses you find out there is more to the jolly façade of the film. In a few scenes Elliot tears away the comedic layer and I found it surprising how fast he could go from dark comedy to uneasy dramatic moments, even delivering some straight punches. One scene in particular near the end of the film is not what you'd expect to see in a "mere" claymation animation film.

There is not a dull moment to be found. The film is littered with funny anecdotes, cute visual jokes and some very telling scenes. It's funny, endearing and dark at the same time, hitting a very rare balance. Add to that the mastery coming from every frame and you have a true gem that should appeal to a pretty large crowd, if they are willing to put themselves past their initial fear of (clay) animation. Easily one of the best films of 2009, deserving of a large and loving audience. Availability is still very limited, but don't miss the chance to see this one.

Do you feel this content is inappropriate or infringes upon your rights? Click here to report it, or see our DMCA policy.
Adam ElliotToni CollettePhilip Seymour HoffmanBarry HumphriesEric BanaAnimationComedyDrama

More about Mary and Max