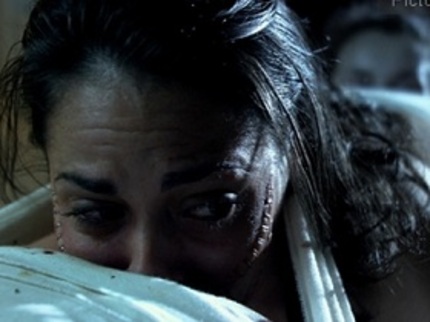 It's not quite what prospective audiences may well be thinking. Yes, Tom Six's The Human Centipede is bizarre and not a little disturbing; yes, it's knowingly, gleefully over the top and yes, it's certainly bloody. Surprisingly, maybe, it's also a compelling, even affecting little film, lovingly stitched together, blackly funny, far less trashy than many would expect and as entertaining as its demented premise allows.

That premise being enough to send many running for the hills; brilliant surgeon Doctor Heiter (Dieter Laser), tired of his position as a noted authority on separating Siamese twins, plans to start experimenting on joining living organisms together. After his first creation, three rottweilers linked mouth-to-hindparts, expires he decides to try working on human beings.

His victims are Lindsay (Ashlynn Yennie) and Jenny (Ashley C. Williams), two chatty, superficial young Americans lost in the woods who stumble across his house, and Katsuro (Akihiro Kitamura), an unfortunate Japanese tourist. With all three prepped and ready for the operation, the doctor begins the surgical alterations necessary to turn them into the titular human centipede.

What any synopsis doesn't reveal is The Human Centipede, certainly to begin with, is actually fairly slow going. Heiter abducts his first (subsequently rejected) candidate, followed by a fairly breezy introduction to the two girls which resembles something out of a stereotypical video nasty (a flat tire, a darkened forest, a leering, cretinous local).

All three guests don't end up in the doctor's basement for some time, and Six then spends even longer first on clarifying precisely what's going to happen to them, then on ramming home the futility of any possible escape attempts.

Weirdly, though, this is as much strength as weakness. Out-and-out gorehounds hoping for copious splatter from the word go are likely to be disappointed, but Six proves a competent director even with the formulaic opening, and he and his cast treat the material with enough of a straight face to establish at least some rapport with the audience beyond simple voyeurism, even while they're laughing. Subsequently, when the doctor spells everything out to his captives, the viewer can't help but be horrified, despite the blatant emotional manipulation. It's an odd balancing act but one Tom Six just about manages to pull off.

Claims of medical accuracy aside, the film is patently ridiculous, but the director clearly knows this; he's also well aware just how disturbing the idea is even so, and the way he tips the narrative from knowing exploitation towards genuinely shocking body horror (while never abandoning either element) is quite startling, even if it does mean the film takes a while to really come to life.

At its best, then, The Human Centipede is far more than just a ghoulish pleasure. Scenes with Heiter attempting to discipline his wayward creation (as the head of the creature, Katsuro is unable to speak a word of English) are grimly funny, twisted, and weirdly artistic all at once, and one extended setpiece climbing a spiral staircase is horrifyingly tense.

Six's cast helps; the two girls struggle with some superfluous dialogue, but their wordless emoting once stitched into the centipede is painfully effective, and Akihito Kitamura makes significantly more of his role than the script suggests (both in comic and dramatic terms). Dieter Laser excels as Doctor Heiter - struggling to stay on the right side of parody come the climax, but phenomenal in the opening act, all monstrous stares, jutting brows and barely restrained superiority complex.

The main complaint, strangely, is probably the film simply doesn't go far enough. The pacing and the (relative) restraint have their strengths but they restrict the big talking points to the second half, or the climax, and when these do arrive it's arguable they don't deliver as much as they could have.

Not merely on viscera (though there could have been more blood and guts), nor sexual content (though weirdly there isn't much as it is); the film does seem to want for any kind of point. While - thankfully - it doesn't bother with the misplaced aspirations of a Hostel or a Saw, the final scenes seem a little too perfunctory - not quite will-this-do, but there could have been more hints at what happens next. It suggests Six's planned sequel (The Full Sequence) could either build on this film or go horribly, horribly wrong if he tries to outdo himself for the sake of it.

Either way, The Human Centipede deserves more than notoriety - even those scared off by the sheer lunacy of it all may well find the film far more rewarding than they expect. Flawed, twisted, and perhaps something of a missed opportunity it still proves entertaining, disturbing, even bleakly moving, and definitely comes recommended.