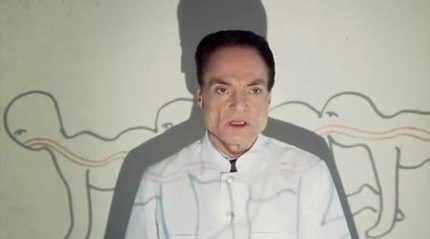 Do they make soap for the brain? I need that after watching this well made and intentionally disturbing crawl-a-thon. The Human Centipede is not a film for everyone, maybe not a film for anyone. Roger Ebert refused to give it a rating, as will I. The constantly advertised fact that it is medically possible literally sent chills down my spine as 'it' unfurled during the movie.
Ominous is one word to describe most of what happens in the film. The opening tracking shot moves through the forest and highway to a car, distorted music accompanies this. We get a look at the star of the film, the brilliant Dieter Laser as the spawn of Satan and Hitler in terms of evil as Doctor Heiter, a celebrated surgeon that specialises in separating the conjoined, now retired and ready to tranquilise his next victim.
The film then moves to two very contrived, cliché and stereotyped American girls that convey the plot and move it forward, they are on holiday in Germany and off to a party, in the middle of nowhere they get a flat tire. It has all been done before, but this is the point, director Tom Six, begins to lure into the familiar, even knowing the title, is not enough until the vision is realised. The girls get harassed by a middle aged foul mouthed pervert while they wait desperately in their car, compared to Heiter this guy is a saint however. For some bizarre reason the girls get out of the car, and do not follow the road, they end up in the middle of the forest, and after much bickering see the light that dooms them both to a fate worse than death. They stumble upon Heiter's house in the rain, and as soon as he opens the door, the freak first encounter speaks volumes of the madness and terror. Heiter is an extremely creepy and brilliant antagonist, his vial sneers and antisocial behaviour he does not even try to hide as he invites both girls in. they sit on the couch and him opposite, his non-verbal communication makes me want to scream run at the girls, he grips the couch staring at them and claws it, which sane person would stick around a moment longer? Before long they fall prey to his traps and drugged water. He injects them just to be sure, from the quickness and viciousness of his actions, this is his pleasure, sexual or otherwise.
He is cruel and through his actions we meet the soon-to-be human centipede. The aforementioned two girls and a Japanese punk that spits venomous Yakuza talk, only, in Japanese. Heiter's god complex escalates to new heights when he lectures all three on exactly what he will be doing and the pride for his previously failed conjoined dogs. Fortunately one of the girls escapes, unfortunately this film contains some of the dumbest victim behaviour in recent memory and it is not long before Heiter has them all subdued and has operated. This scene was way too short, for a film that brags about the procedure and how real it is, I was not convinced by the surgery.
It is at this point you really have to feel sorry for the other actors, they are reduced to subhuman and spend the rest of the film moaning and groaning to create a soundtrack of misery, as Heiter trains them, not at all satisfied in the end with his results.
The moment comes when the Japanese, the front of the centipede has to go number 2, into the American's mouth, I am not even going to attempt to analyse what Tom Six is insinuating with the race mix, regardless this is a scene cemented into my brain, "feed her, yes feed her!" commands Heiter. He apologies profusely for what he has done, where is your apology Tom Six?
Eventually the trappings of generic genre become obvious, the baddie slips up, another party becomes involved and tries to save the day, and the victims just get dumber. The film climaxes in an awful unresolved way, in what is the second image that will haunt me for some time, it leaves a bad, bad taste, which was definitely the intention.
Sign-In to Vote
Tweet 0 Submit

"... the Japanese, the front of the centipede has to go number 2, into the American's mouth, I am not even going to attempt to analyse what Tom Six is insinuating with the race mix ..."

But yeah: "... unfortunately this film contains some of the dumbest victim behaviour in recent memory ..."

I actually thought Six employed a good deal of restraint in where he could have gone and in what he showed and didn't show. Void of its concept it's not a very good 'film'. Doctor Heiter is a decent bad guy but he has to operate with some pretty bad scripting.

thats about it. Inside and Martyrs are generations better than this crap.

I wish Tom Six built the film around his initial inspiration, the thought that politicians and political commentators such as Ann Coulture and Bill O Reily should have their mouths shown to each others assholes. From the title alone, we know that the victims have no chance. It would have been a lot more fun if the film had more of a sense of humor and utilized characters that we'd actually want to see these horrible things happen to. Watching an innocent woman scream and cry for two hours isn't so fun when we know there's no hope.

Also,anyone else notice that Tom strategically places the actress' arms so that we don't see any nudity for much of the film even though their both topless. The first time he reveals any tits is when the Japanese guy starts shitting in the other woman's mouth. That I find REALLY disturbing.

Also, you all know Tom Six began his career in reality television and was a co-creator of the original big brother in the UK right? Says everything you need to know about his views on people. Funny guy and actually really nice in person though.

OK maybe I am reading into this too much, but let me propose something.
the film is sort of reflective of World war II and the atrocious war crimes committed by the German and Japanese, including the rumored experimentation. At that time every other race was practically animals to them, so I found it a particularly interesting choice to use a Japanese man, especially at the head (unless he was just catering to the Japanese market?) and near the beginning the Japanese guy proudly spouted what sounded like Japanese propaganda, the spirit and determination of the Japanese etc.

Damn that is disturbing, I really don't want to read into it as much as I did, it's a dark place to traverse! His initial inspiration sounds hilarious, it would be a completely different film, even with the same premise if he introduced comedy elements, the only comedy in this film however was.... Oh sorry it was all death and misery.