AFM 09: The Producer Of TURKEY SHOOT And PATRICK Brings A METAL TORNADO! 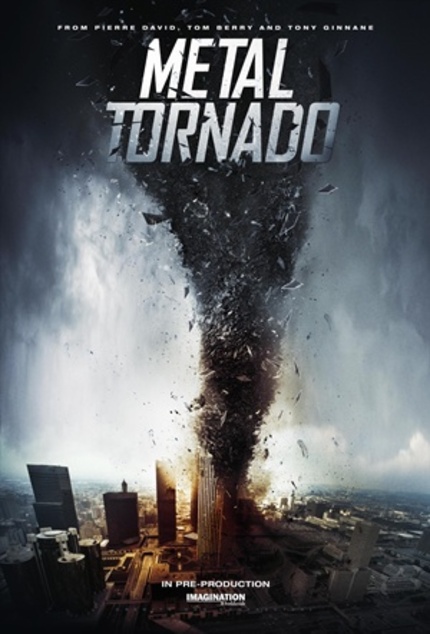 Fans of classic Oxploitation film and viewers of recent doc about same Not Quite Hollywood need no introduction to Tony Ginnane.  A veteran producer who has long embraced comparisons to Roger Corman, Ginnane built his name in the seventies while producing films like Patrick, Turkey Shoot and Harlequin - films that led the wave of pulpy genre pictures being exported from Australia.

Though we haven't heard much from Ginnane on this side of the ocean in recent years he's still quite busy and ready to cross back over the ocean with the SciFi Disaster Chronicles - a multi film series that we first reported on back in May.  And my favorite of the titles in the series is - without a doubt - Metal Tornado.  Because who doesn't want to see a film about a giant swirling vortex of metallic death?  Here's the synopsis:

When astronomers discovered the phenomena of magnetic tornados on the planet Mercury, they were amazed by the destructive power of these gargantuan solar-fueled magnetic fields...but they never imagined witnessing the catastrophic forces in their own backyards.

Samuel Planck is head of the HELIOS PROJECT--a high tech facility tasked with storing and converting solar rays into an endless supply of renewable energy. After years of research and millions of dollars, it is now time to test the system out. The scientists cheer loudly as initially things go according to plan. But when the facility is unable to control the massive amount of energy coming in, the cheers turn to screams. The charged particles begin swirling around themselves, creating a massive magnetic vortex that quickly becomes the first magnetic tornado on earth!

Planck and his team try to abort the procedure but it's already too late--with a trillion watts of power to draw from, there is nowhere this monstrous force of nature can't go. The mega swirling tornados are soon ripping steel from buildings, cars off the street, and planes from the sky as they pulverize everything they touch!

Now Samuel Planck and his team must find a way to stop these metal tornados before they destroy all of us!

No trailer yet but that spiffy artwork attached to this post is brand new and rather lovely.