A Bruce A Day: THE BIG BOSS 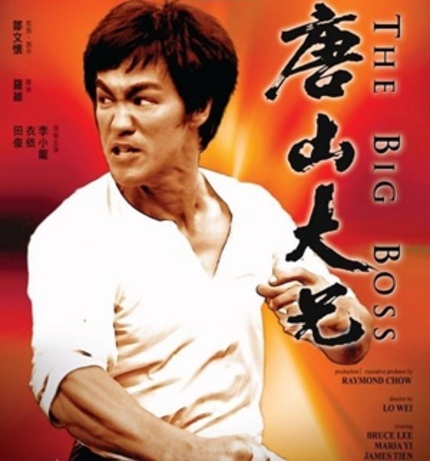 [With the four proper Bruce Lee features recently remastered and reissued on BluRay in Hong Kong I figured the time had come to revisit the old classics that I hadn't seen in a while, while also finally getting a look at the titles that for whatever reason I had simply never seen before now.  I'll be reviewing them throughout this week, one a day, in chronological order.]

Bruce Lee became an instant leading man with 1971's The Big Boss - his first leading role on the big screen following a successful stint playing support roles on American television.  Recognizing that US television would never allow him the central roles that he desired - and deserved - Lee made the move to Hong Kong where his first ever starring role in the Lo Wei directed picture became a huge success and put him immediately in the top tier of global action stars.

Lee stars as Cheng Chao An, an impetuous young man sent off to Thailand to support his poor family back home.  He has a job waiting for him there at a small ice factory, a job arranged for him by distant cousins already hard at work, a job that will hopefully enable him to support his beloved mother through her old age.  And though she may be far away, mother's influence is still keenly felt - recognizing her son's penchant for trouble she has made him swear an oath not to fight, an oath symbolized by a jade pendant always dangling from Cheng's neck.

And that reminder is something that Cheng clearly needs for, while his waiting family certainly welcomes him with open arms, Thailand can be a rough place and one hostile to foreigners.  Cheng has not even arrived at his new home yet when his cousin Hsu Chien is drawn into a fight with some brutish locals and it requires all of Cheng's self discipline to refrain from joining into some scuffle or another seemingly every day.

The first note that something serious has gone wrong comes early, with word that a family member the Thai contingent were told had returned home to find a wife had never, in fact, made it back.  The second, more serious note comes on Cheng's first day at work when an over-exuberant push on a block of ice causes it to split open, exposing something very definitely not made of water hidden within, a sight viewed by two of Cheng's cousins who go missing that very night.  And when Hsu and another cousin go looking for answers ... well, they don't come back either.

In many ways a by the numbers affair with minimal novelty in the script, The Big Boss seems to delight in teasing its audience as to when its star will finally get to really flex his muscles.  It toys with viewers for the entire first half of the film, leaving all the fighting to Hsu while Lee's character observes from the sidelines but once things start going bad and some foolish bad guy makes the mistake of tearing off Cheng's pendant, well then it's on and on in a big way.

Once Lee is cut loose it is immediately clear why there was no typical ascension phase to his career.  He steps out in The Big Boss already a fully formed star.  Powerful and magnetic, all the ticks and quirks that fans associate with him already in place, Lee is a true force of nature on the big screen.  More than any other screen fighter before or since, Lee embodies a fusion of power and precision.  There is a brutality to his work that is still somewhat shocking, a total disregard for the typical rules of honor in screen fighting.  Lee is concerned only with what will get the job done and if that means hitting below the belt, then so be it.

This is not to say that his work is grim and harsh, however.  No, Lee also understood what it meant to be an entertainer and also includes some surprising elements of comedy in his work, moments of intentional slapstick such as the perfect human shape left in a wall after Lee kicks someone through it through to the goofier examples of period excess such as the dog-attack sequence that clearly at points features German Shepherds being thrown through the air to give the impression they are leaping up to try and get at our hero as he jumps over their heads.

The Big Boss may be far from Lee's best film - it needs a stronger villain and a stronger script - but it is still a hugely entertaining one, one that makes it clear that Lee's star power is something that he came naturally by.  And it also features the first great moral of his career:  If you need to know something, just ask the Thai hooker.  Not only will she know the answer but she'll show you her breasts while telling you.

I'm not a big AV nut, but for those curious the audio and video quality on the BluRay release both struck me as being very strong, though the extra features are negligible.  Hong Kong BluRay releases are Region A, which means this is playable on any North American BluRay player.
Sign-In to Vote
Tweet 0 Submit

No mono, no sale. I'm really getting pretty damn sick of having to "roll my own" versions of Hong Kong films in order to achieve a baseline level of competence, especially when reports indicate that the amount of unused space on these discs exponentially exceeds the amount of space required for a Dolby Digital 1.0 track containing the original mix. The only reason the DVDs had mono tracks was because of customer outcry - apparently we're going to have to play this stupid game all over again.

Tangentially related; while the Kam & Ronson/Fortune Star Bruce Lee Blu-Rays have apparently been true HD transfers, the same company's Blu-ray releases of the ONCE UPON A TIME IN CHINA and POLICE STORY series have, so far, proven to be upconversions from the 480p masters (of course, minus the mono mixes that were an option on the DVDs). Much like the early days of Hong Kong DVDs (and of these same titles, no less), this is pretty much shady as hell. The ever-classy HKFlix is pushing the OUATIC and PS Blu-rays hard. Don't fall for it.

The Police Story discs aren't really high def? Damn ... down comes that post and that's my order cancelled. Thanks for the warning ...

Oh ... and this one and Fist of Fury are definitely real HD masters but, having just started into Way of the Dragon, it definitely is NOT. Doesn't even seem like decent DVD quality, honestly. Really shamefully bad.

asianblurayguide.com has screengrabs of POLICE STORY and OUATIC - horrendous looking stuff, not for the digitally squeamish.

Strangely enough OUATIC isn't that bad when seen in motion (it often looks like true HD with the noise-removal filter turned up too high). Don't freeze the image though: your television will suddenly look like a stained-glass window. Weirdest thing I've seen yet in this format...

But things can always be worse: the POLICE STORY BluRay is ouch... just ouch...
It's not just upconverted, it's badly upconverted and the end result is just shameful. Was the used original even 480p? I sincerely doubt it...

Big Boss! I must get this on DvD/Blu-Ray!

First time I watched this movie, I laughed my ASS off! My best and favourite Bruce Lee movie!

Best part was at the ice rink thing, someone bumped on him and grabbed his necklace, and Bruce Lee was finally unleashed!:D