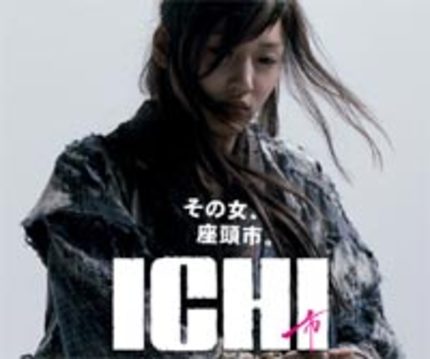 [This review originally ran as part of our coverage of Sitges 08, but I revisit it now on the occasion of its BluRay release in the UK.]

Freshly off a screening of Fumihiko Sori's Ichi - a partial re-envisioning, partial continuation of the classic Zatoichi saga - I feel quite confident about two things.

First, though he now has only three feature films to his credit Sori is arguably Japan's most wildly diverse director. Thus far he has made a charming indie comedy (Ping Pong), an animated scifi spectacle (Vexille), and now a traditional swordplay drama. All are impeccably crafted and all vary so wildly in style and approach that you'd never guess that the same man directed all three if not for his name in the credits.

Second, if there is any man on the surface of this planet with a fighting chance to out-do Riki Takeuchi in the crazy-face department then that man must surely be Shidou Nakamura. Yes, both are in this film and, yes, both break out the crazy-face on a regular basis.

Haruka Ayase is the titular Ichi, a beautiful young blind girl eking out a living by traveling the country as an itinerant musician. But while she may be beautiful and she may be blind you should never make the mistake of assuming that Ichi is weak. You see, a blind traveling masseur visited Ichi regularly throughout her childhood, training her up in a unique style of one handed swordfighting, employing a lethal blade embedded inside her cane. Though he is never called by name in the film that man is very clearly the legendary Zatoichi - subject of more films and television shows than I care to count - and the now-grown Ichi is roaming the country searching for her long-absent teacher, the man she believes may be her father.

Always isolated, always alone, life begins to change for Ichi when she is assailed by a trio of gangster thugs - the Banki-to - and a wandering samurai rushes to her aid. Though he fails utterly to actually help in any way - forcing Ichi to instead come to his aid and cut down the trio of villains - she has reluctantly gained a friend and soon adds another when a motherless child attaches himself to Ichi as her guide when the duo enter a nearby village. Things are not well in town. The villainous, disfigured Banki - played by the always charismatic Shidou Nakamura - is squeezing the town dry with his gang of well armed thugs while the son of the local yakuza lord (Sori regular Yosuke Kubozuka) chafes at his inability to act. As is always the case with these stories Ichi ends up drawn deep into the conflict against her will ...

Don't let the colorful costuming, gender switch or occasional mucking about with frame rates fool you. Sori is not at all interested in modernizing the Zatoichi tale. He is not rocking it out, punking it up, or in any other way messing with an incredibly successful formula. No, Ichi is,instead, Sori's ode to the classic samurai films of old, filled with classic archetypes and beautifully constructed. He follows the tried and true structure throughout - the story is much less about Ichi saving the village than it is about the support characters finding the strength to empower themselves - and executes it beautifully. The film is populated with colorful characters each of whom gets their moment to shine, strong actors, richly detailed design and beautiful cinematography.

The one major variation from the original character - other than the gender switch which is, admittedly, fairly major - is that in Ichi our wandering, blind sword fighter is cast as a truly tragic sort, a woman abandoned and alone through no fault of her own and struggling to find a reason to go on living. Angst is about the last word you would attach to any of the previous incarnations of Zatoichi on film, with the character typically being played as a lovable rogue, always gambling and drinking and happily roaming wherever his feet may take him. There is a sense of play to the original films that is largely absent here, the carefree rambling replaced by a desperate quest. Far more than the change in gender this change in nature makes a huge impact on the film as a whole, giving it a feel entirely its own, despite the familiarity of so many of the elements.

The obvious question is whether the differences makes this a better or worse film that what came before and that's a question I have a lot of difficulty answering. On the technical end this is arguably the best looking, best constructed film ever based on the Zatoichi mythos. It is simply gorgeous to look at. As for the tonal shift the answer will largely come down to how quickly you can put aside your memories of Shintaro Katsu in the role and how well you feel Haruka Ayase manages to convey the depths of this new character. In my books Ayase is competent, though not spectacular. Though she is not really a match for some of her co-stars - Kubozuka and Nakamura are two of the very best of their generation - she manages to hold her own well enough. The end result? A solid spin on a classic character.

The new Manga UK BluRay release of the film may feature little in the way of bonus features - okay, nothing at all beyond the Japanese theatrical trailer - but it does things right where it counts with an absolutely gorgeous and perfectly pristine transfer of the film. The cinematography is one of the great strengths of Ichi and this release more than does it justice. The audio treatment is similarly strong. And for fans outside of Europe, good news: Though this is a UK release it appears to be all region, it played on my player without a hitch so it should be good to go anywhere.