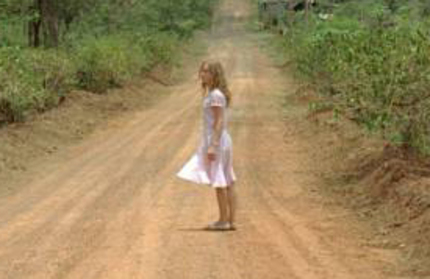 Set in an unspecified French speaking African nation mired by civil war, Claire Denis' White Material skirts around much of the social and political commentary that comes with many films shot on the African continent by semi-outsiders.

It is in Denis' choices to stay so aloof, and so unwilling to label her motivations as a filmmaker, that brings both the film's strengths and weaknesses.

Something of the perennial colonial white family, the Vials run (or at one time ran) a coffee plantation. Even before the workers flee the impending rebel and government troops who are sure to sweep through the area without mercy, the plantation is a venerable ghost town of run down shacks and concrete buildings. It is the somewhat matriarch, Maria (Isabelle Huppert) who insists that they finish the harvest, and amongst fleeing citizens and the arrival of child armies, sets out to hire new workers.

For sure, Maria is in denial of the escalating conflict around her; she believes this is very much her land, her home, her people. A one time use of voice-over/inner monologue has Huppert's Maria stating that "the whites don't belong here, that they should flee, they don't understand."

Later in the film, William Nadylam's Mayor/Cherif tells her that, "Blondness is a dangerous thing." These moments stand out for both their strangeness and articulation and concern around what it means to be both an outsider, and yet someone who feels they inexorably belong.

Beyond this Denis' fascinations are difficult to articulate or discern, and I'm sure she wouldn't have it any other way. Almost ethereal, unnerving, and deeply rooted in a sense of dread, of days gone by and ending, White Material floats above the surface of any major ideas or questions, and stays adamantly away from lyricism or sentiment. But neither is it inviting as a purely cinematic experience, as in one that just washes over the viewer and lets you observe free from political, ethnic, or cultural ideologies. A document of conflict in our uncertain times, as a whole White Material is an uncertain film that holds no real lasting effects.

As a side note, this post is labeled as a part of the New York Film Festival (NYFF) but due to the fact that the festival ignored my inquires regarding a press pass, and the astronomically high ticket prices, this was the only film I was able to cover during the fest. Better luck next year.