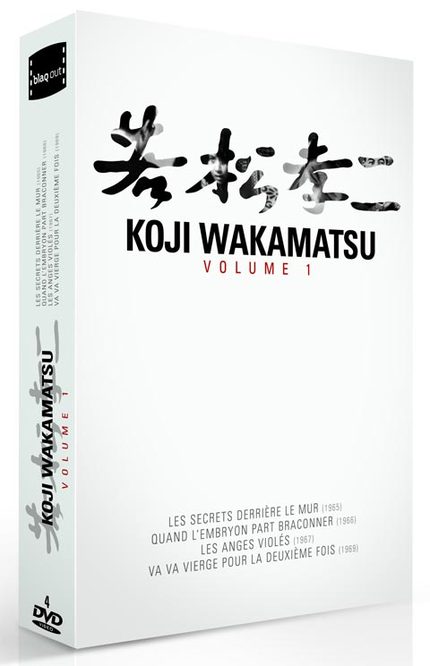 Better than a gift box of Spam for the Chuseok holidays is the news that fourteen films (many on DVD for the first time) by legendary pink film director Koji Wakamatsu will be released by French distributor Blaq Out. The first box set will be released on October 6th and includes some of the director's most highly regarded works, transferred from high definition masters. The films will also be made available for viewing on VOD, with English subtitles. And in November, a 2-DVD box set of Wakamatsu's United Red Army will hit the shelves. This from Blaq Out's website:

"Check out the 6th of October for the first time on DVD, the best of pink cinema through 4 films by maverick Japanese director Koji Wakamatsu: Secrets Behind The Wall (1965), The Embryo Hunts in Secret (1966), Violated Angels (1967) and Go Go Second Time Virgin (1969). Selected at Cannes Film Festival at Directors' Fortnight, for the ones, or at Berlin Film Festival, for the others, those New Wave-inspired back and white films are part of cinema history in the 1960s through their subversive political content that actually still strikes (The Embryo Hunts in Secret was considered not for audience under 18 when released for the first time in French theaters in... 2007! A first 4-disc boxset will be released in October (with French subtitles only). English subtitles will be available on the VOD versions, which you can download (legally) from http://www.dissidenz.com. Then two more Wakamatsu boxsets will follow in 2010. On October 6, another long-awaited DVD will be released: Ceci est une pipe (This is a blow job) by Patrick Mario Bernard and Pierre Trividc (Ballroom, The Other). Lastly, November will be red with the release of Wakamatsu's latest feature: United Red Army in a prestigious 2-disc edition. An astonishing docudrama about student leftism in the 1960s in Japan."

Here's a list of the rest of the titles that will be released in 2010: