Get Your First Taste Of Koen Mortier's 22ND OF MAY 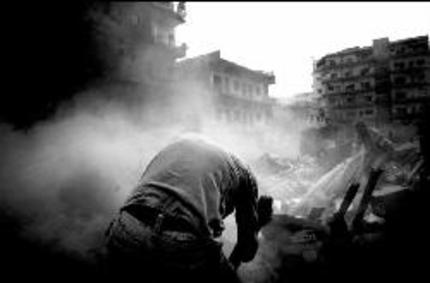 We have been very outspoken supporters of Belgian director Koen Mortier in these pages from the day we first came across his stunning feature debut, Ex Drummer, at the Toronto International Film Festival and the coming years promise to be busy ones for the Belgian auteur.  Not only is he hard at work prepping an adaptation of Chuck Palahniuk's Haunted and producing several other Belgian projects via his CCCP production outfit but before he makes his English debut with the Palahniuk he'll be shooting another Belgian project. Due to begin principal photography any day now is 22nd of May, a terrorism themed project we first reported on back in 2007.  Here's an excerpt from the synopsis:

In Mortier's hands this should be harrowing stuff but you don't need to just take my word for it.  In a bit of a dual purpose move, Mortier has just completed a music video for Guy van Nueten which also doubles as a camera test for some of the explosion effects that will be employed in the feature.  It's beautiful, eerie work, quite reminiscent of some elements from Ex Drummer and not just because it shares an actor.  Check it below.