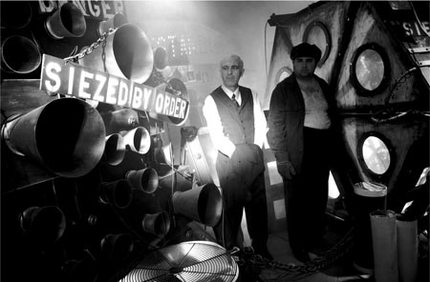 One would think that after three features in a row that mine personal history and biographical idiosyncratic fantasies, Guy Maddin would be through with this.  Immersion down in the Nation Film Board (NFB) archives for someone like Maddin would probably be bliss, so it is with the usual self-deprecating wit that he titles his latest short, Night Mayor, (an ode to the NFB itself) at first glance as a play on public office, but upon deeper inspection a play on the words themselves.  Say the title fast and you get the idea.  While the NFB was more or less created for propaganda purposes in the WWII, it also served as a strange and public initiative to form a national identity.  The same earnest weirdness that the Canadian government has often laboured with in an effort to create from scratch a national identity that would stick.  And also something that the avant-garde filmmaker has been doing himself, more effectively in the relatively narrow art-film world (in his own peculiar manner) for the City of Winnipeg.  On the national cinema and festival world, however, this might as well extend to the entire country.

Indeed, Guy Maddin's Night Mayor (heh) was commissioned for NFB's 70th anniversary to celebrate its roots.  Using his signature rapid-fire editing, rear screen projection and repetitive voice-over (this one is not silent and an accented deadpan narration replaces exclamatory! title! cards!) the director tells the tale of a Bosnian immigrant who moves to Winnipeg and builds a machine, the Telemelodium, to harness the light of the Aurora Borealis into images and sound that will offer Canadians from coast to coast (is Winnipeg the geographic center of Canada?  In Maddin's mind, yes) national identity, a cultural mirror ("I show Canada to itself") and a wellspring for their own creative flow.  Of course things get out of hand, large banks of ominous looking speakers and fireworks become deafening before the government comes in and cuts the transmission cables (the Telemelodium uses the phone lines, presumably upsetting the CRTC despite indirectly fulfilling their most infamous mandate; here 100% Can-con!).  Oh, the artistically defeatist Canadian spirit. The inventor not only lets in the cops and bureaucrats, but forgives the government for doing what they will!  The self-reflexive defense mechanism displayed in Maddin's 'live narrative' road-shows of late (in a conversation I had with the director last year he jokingly (or not) quipped that if he is up on stage narrating, the audience is more forgiving and least likely to hoof for the exit) channels this energy of uncertainty.

Either way, enthusiasts of the director will find a lot to love here, even as it seems like more of a 'holding pattern' in the current groove Guy Maddin has found himself mired in:  "I am the Night Mayor, the Nightmayor, the nightmare!"

Do you feel this content is inappropriate or infringes upon your rights? Click here to report it, or see our DMCA policy.
Guy MaddinNihad AdemiMike BellTimna Ben AriDarcy FehrShortDrama

Love me some Maddin. Saddest Music in the World and My Winnipeg were both fantastic. And Sissy Boy Slap Party is one of the greatest shorts ever!

Fans of Sissyboy Slap Party should get a chuckle out of Nude Caboose. (http://www.youtube.com/watch?v=Z3l09oxeYTE)

I found the clips underwhelming. The voiceover sounded forced and the misspelling in the above still grated. Yes, believe it or not, I'm a spelling freak. Nothing could top The Heart of the World, in any case.