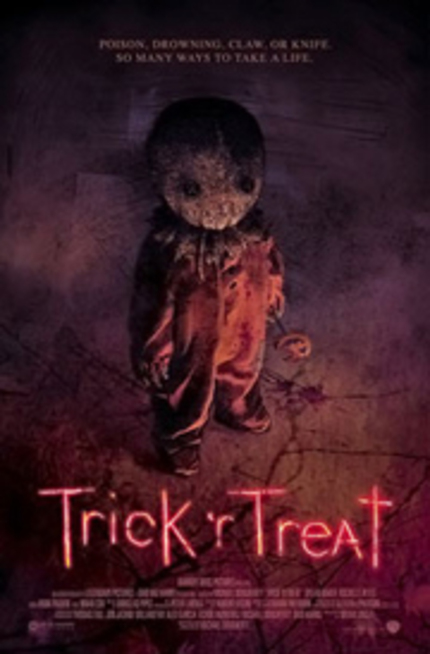 [I'm going to bring this review back up from Toronto After Dark because despite any misgivings I may have had about the film I have one thing to say. The Spirit of Halloween is dying in my opinion. Each year less and less kids come to the door and each year the costumes get lazier and lazier. Those of us who are devoted to this holiday are few and a movie like Treat 'R Treat can remind us how awesome this single night can be and should be, by which I mean the spirit of it all. We can all do without the actual ghouls and monsters and death. That would be a downer.]

Well, things wrapped up last night at this year's Toronto After Dark Film Festival. As I write this I know Kurt is writing his review of Grace so I'll leave that for him. I'm going to return back to Thursday night which appropriately enough for this review started as a dark and stormy night. A significant storm roared through the surrounding Toronto area- rain, thunder, lightening, and tornadoes- and knocked out the projector as it was playing Joko Anwar's The Forbidden Door sending that screening into spiraling chaos, never doing his film justice. Luckily for the massive sold out crowd gathering outside the doors of The Bloor Cinema for Michael Dougherty's Trick 'R Treat his film came on a separate format [though I did hear him gasp behind me during a oh so slight glitch in the picture] and all was not lost that night. The theatre smelled like a gym locker. It was hotter than hell inside. But nothing could stifle our enthusiasm for one of the better Halloween themed films to come along in a while.

TRT marks the directorial debut of Mark Dougherty who cut his teeth co-writing the scripts for X2 and Superman Returns. Taking his love of anthology horror films like Creepshow and Tales of the Crypt Dougherty offers us his own interpretation weaving together four tales of horror in a small American town (hello Vancouver and surrounding area) on Halloween night. A school principal (Dylan Baker) laments the loss of Halloween traditions with one of his students. A young woman (Anna Paquin) dressed as Little Red Riding Hood looks for a date for a party in the woods. A prank goes too far and the pranksters discover the horrifying truth behind an urban legend of a school bus massacre. And cranky Mr. Kreeg (Brian Cox) is visited by a strange trick-or-treater, Sam, a new icon for Halloween horror films.

First we have to talk about how great Trick 'R Treat looks. I mean, it looks really, really good. Dougherty, together with his cinematographer, Montreal born Glen MacPherson, and art director Tony Wohlgemuth and created a beautiful and creepy Halloween wonderland. Despite all the horror and blood on the screen you cannot help but stop and see how great everything looks. Trick 'R Treat has tonnes of Halloween atmosphere to create the right mood.

I also want to say how glad I am that Dougherty also included practical effects in his film. Without giving anything away there are a lot of nice creature effects in TRT. I hope they were a nod to a creature effects master like Stan Winston. At first I was a bit befuddled by the character design for Sam but I can only assume that he too was a nod to prior pint sized practical effects creatures from horror films in the 80s and 90s. With that reasoning in mind I have become accustomed to Sam appearance under that mask and have accepted it. Computer graphics were kept at a minimum or were not grossly obvious or poorly executed.

Dougherty's script has equal amounts of gross humor, creatures, ghosts, scares, horror and blood. There are times to laugh, cheer and scream. What worries me about though is its staying power and effectiveness with multiple viewings. The way he has written each tale to intertwine with the others and a bait and switch reveal at the end of each one the magic of the first viewing or two is sure to diminish. Also, after the second tale had unfolded and Dougherty's script had once again pulled out the rug from underneath us I found myself anticipating what he was going to do with the other two, a somewhat distracting effect. The Treat in this film is the great look and feel of it. The Trick is in his script and once you know how a trick is done the magic behind it is gone.

While I wouldn't say any new ground has been broken with his film I would say that Dougherty seems to have no problems filling up any of those holes with fresh bodies. It is an enjoyable Halloween film that will be further scrutinized on repeat viewings. Regardless, a young talent with an appreciation for horror film's lineage has created a very nice calling card for himself.

Why this has taken so long to come around for the Halloween season is a mystery for it's been just over a year and a half since Trick 'R Treat began screening at festivals. It is a shame this won't get a full theatrical release because it is a great primer for the Halloween season. Alas, you will have to make do with DVD, BR and VOD in October.

Do you feel this content is inappropriate or infringes upon your rights? Click here to report it, or see our DMCA policy.
Michael DoughertyDylan BakerRochelle AytesQuinn LordLauren Lee SmithHorrorThriller