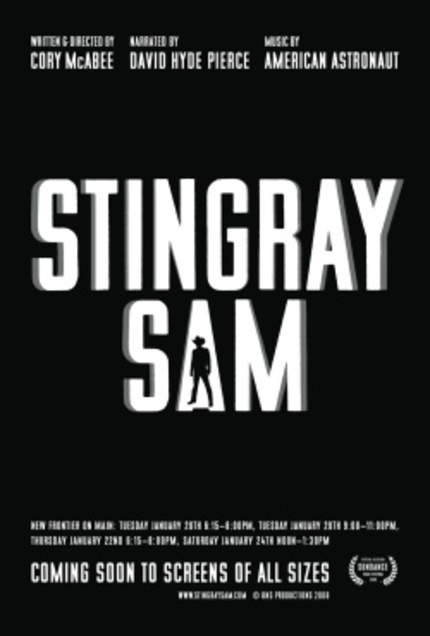 [The following review originally appeared as part of Ard's coverage of Amsterdam's Imagine This festival earlier this year. It reappears now with the film about to screen at Fantastic Fest 09.]

Hi y'all! Time to get silly.

Having never seen Cory McAbee's previous film "American Astronaut" I had no clue what to expect from his latest sci-fi non-epic "Stingray Sam". So as I waited for the venue to open its doors, I checked out the scores so far for the Silver Scream Award, which is the Imagine Film Festival's yearly award based on audience ratings. Guess what: "Let The Right One In" dominated the chart as expected. But to my surprise "Stingray Sam" was in second place with almost the same score!
This made me very curious to say the least, as on paper this title didn't look like an audience pleaser.

For "Stingray Sam" is mostly shot in black & white and on a below-low budget. It's also allegedly meant to be seen on mobile phones as a series of six ten-minute episodes, and its director Cory McAbee even gave a masterclass during the festival on how to make mobile phone movies. It also features (gasp) songs.

The version of "Stingray Sam" shown at the Imagine Film Festival had a razorsharp image and good sound, but still... this was the movie that had a good chance of dislodging Alfredson's much-heralded vampire movie from its first place?!? In fact, it DID reach first spot (albeit for a single day only).

Now that the festival has ended, "Stingray Sam" ended in second place with an audience rating of 8.8 out of 10 which is freaking high. The reason for its success is quite simple: despite (or maybe because of) its humble origins, Cory McAbee's film is almost insanely entertaining. When you see the audience clapping and singing along with the opening credits (which are replayed in front of every single episode) you know there is something special going on...

Kindhearted ex-robber Stingray Sam is trying to go straight. He hides from the law, working as a singer-slash-bouncer in a seedy nightclub on Mars, but the planetary economy is in decline and life is hard. Then, one day, his old pal The Quasar Kid shows up with an offer Sam cannot refuse: on a planet far, far away, a little girl is kept prisoner by an insane plutocrat. And if Stingray Sam and The Quasar Kid rescue her, their criminal records will be wiped!

Soon, these two space cowboys set out on what may be their most difficult adventure yet...

Describing what makes "Stingray Sam" work is a bit of a problem because I can't quite put a finger on it. The material is goofy, the execution even goofier, and at times it looks as accomplished as a high school musical (not the movie "High School Musical", but an actual high school musical!). The production values are nearly non-existent and the many different planets in the movie are all represented by the same desert shot, each time filmed through a slightly different color filter. Yet it clearly isn't made by twelve-year-olds, and therefore doesn't have the "Look-what-we-made, Ma!" factor.
So why is it so good?

Maybe it's that even though the proceedings get really silly, it never feels dumb.

The Fifties' serial look has been recreated with obvious love, and the stark black and white photography really helps in selling it. The unique sparse sets and designs show genuine creativity and don't feel like they've been caused by a low budget. Information storage (for example) is done with bulky cumbersome devices, interfaced only through ancient coiled cables and huge plugs. Yet this is exactly what might look like science fiction in the Fifties, and this is used consistently throughout the film to set up some great jokes.

Some of the plays on well-known science fiction tropes are also very witty indeed, and even during the most ridiculous parts of the story some dry sarcasm can be felt. Exposition is often handled through paper-collage animations which (if anything) resemble Terry Gilliam's work for the Monty Python's television series. As opposed to the normal narrative, these parts are actually in color, yet instead of creating a design-clash these make the whole experience of watching "Stingray Sam" an even more pleasurable one.

Music is by Cory McAbee himself and his band "American Astronaut", which provide the silly but VERY catchy ditties with verve. There is one song which entirely consist of variations on the sentence "Fred and Edward had a child named Fredward!", and it's sung with utter sincerity and conviction. It's even important to the plot! That's talent...

The acting is again courtesy of Cory McAbee himself and his band "American Astronaut", together with some friends, and they play it as dry and straight as possible: everyone is chewing the cardboard scenery for all its worth. Eh... make that about a hundred times its worth.

As a series of episodes "Stingray Sam" would undoubtedly be fun enough in itself, but seeing it as one feature it becomes pretty hilarious! The repetition is used to put in some strong running gags, while the fact that each episode has to have three acts, an animation and a song in it keeps the speed up. With its short running time, seeing the same opening credits pass by six times makes you laugh because of the sheer audacity of wasting so much time on them. Then again, by the time you reach episode four you might be so deep into this weird universe with its fun visuals and country music, that you'll start singing the theme song. Some people in my audience did, and they weren't booed away either!

Few films have me chuckling from beginning till end, but this one managed to do it. Well, except when I was laughing. "Stingray Sam" is a cleverly made loving tribute to the serials of old (be they "cowboy" or "spaceman" ones), and a darn' funny one too. Nobody in the cinema would have minded a seventh episode... then again it doesn't give itself the chance to outlast its welcome. It's short, but sweet.

Don't be deceived by its cheap looks or stunning black-and-white-o-vision, Cory McAbee put more creativity and wit in his film than I've seen in ten movies twice its length and a hundred times its budget.

Do you feel this content is inappropriate or infringes upon your rights? Click here to report it, or see our DMCA policy.
Cory McAbeeCrugieDavid Hyde PierceJoshua TaylorComedyMusicalSci-Fi

The Imagine Festival page for Stingray Sam, including a trailer