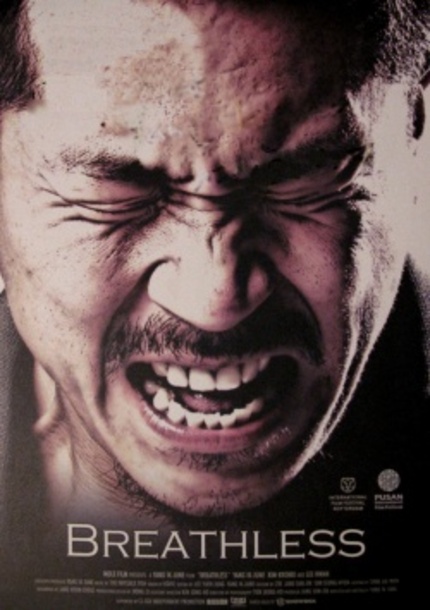 [This review originally appeared as part of Ard's coverage of the 2009 Imagine This festival in Amsterdam and reappears now with the film screening at Fantastic Fest.]

Here at ScreenAnarchy we've often lamented the fact that after the meteoric rise of South-Korean cinema a major slump followed which seems to be quite hard to shake off. Where are the challenging, cool and stylish films which were almost synonymous with Korea a few years back?

But according to actor Yang Ik-June, a new generation of directors is starting to emerge right now which will break the slump. And he gives the right example himself, for recently he released his first feature-length movie "Breathless".

And while it may not be particularly cool or stylish it surely is challenging, telling a harsh story about an unpopular subject. Yet when it played at the International Film Festival Rotterdam last week it not only won a Tiger award but also got an audience rating of 4.1 out of 5 !! This matches the score of, say, "Bronson" or "Il Divo".

The reason why "Breathless" gets acclaim from both audiences and critics is easy to see: excellent and very impressive acting from everyone involved.

Sang-Hoon is a smalltime gangster working for his friend and boss Man-Sik, collecting protection money from local shops and doing the odd job where someone needs an extra fist or two. For Sang-Hoon is a violent and extremely antisocial man, keeping everyone at bay with his incessant cursing and his habit of slapping people in the face for, well... any reason.

This stony facade shields a soul damaged by a childhood with years of domestic abuse and tragedy, including events which sent his father to prison for decades. The recent release of this father worsens Sang-Hoon's foul mood, making it even difficult for him to communicate with his sister and her little son.

But then something odd happens.

When Sang-Hoon has a chance encounter with foulmouthed schoolgirl Yeon-Hee he is intrigued by her resilience. She keeps out-cursing him even after being slapped around, and strangely enough their constant sparring provides Sang-Hoon with more human contact than he is normally used to. The two become the unlikeliest of friends, even though they won't admit to it at first. They have something in common: unknown to Sang-Hoon, Yeon-Hee is still a victim of daily domestic abuse by both her demented father and her violent brother.

The two slowly start to have a beneficial effect on each other, but will their violent surroundings allow for a mutual healing?

The original Korean title for "Breathless" is "Ddongpari", meaning "dung fly", a Korean nickname for the sort of person you brush off, not wanting them to get close to you. A fitting name although frankly I'm surprised the original title is not "Shut Up You Fucking Bitch Before I Kill You!" as the script treats the audience to a seemingly unending variety of this sentence. For this movie tackles the subject of domestic violence which is still very much hush-hush in Korea.
Unfortunately, if the film is to be trusted it is also dishearteningly widespread.

With a running time of more than two hours, viewing this movie is indeed a grueling experience. Not only for all of the domestic violence on display but because it shows the damage it causes to children who are the victim of it or are close enough to understand what's going on. I've heard lots of people complaining about the length of this film but I personally think the endlessly repeated beatings and psychological abuse work to the film's advantage, because it horrifyingly shows just how casual and unavoidable it becomes after a while. It is not for the squeamish, but gorehounds need not apply here either: the camera shakily focuses on the faces of the people doing the violence, not on the damage done to the victims. Their screams suffice though...

Strong stuff indeed and hard to stomach: there were several walkouts during the International Premiere. Yang Ik-June based part of the script on some bad childhood experiences which left him with a lot of questions and anger, so you can be sure he treats the subject seriously.
But thankfully some wry jokes and colorful side-characters make the film more palatable. Especially the character of Man-Sik keeps surprising as a mob-boss who is anything but stereotypical. And the movie really comes alive whenever Sang-Hoon and Yeon-Hee are onscreen together, also because their relationship never evolves into the standard romance you'd expect. Instead of exploring a sexual angle the film refreshingly focuses on the comfort of friendship, of the relief of occasionally having a kindred spirit nearby.

Much of the reason why this approach succeeds is because of the brilliant acting of both Yang Ik-June himself as the gangster Sang-Hoon, and Kim Kkobbi (no spelling error...) as the schoolgirl Yeon-Hee. In Rotterdam people referred to this film as a true actor's film and few statements are more correct. Even the smallest of roles seems fleshed out and believable, no mean feat considering Yang used a lot of non-professional actors for the bit-parts. The man is truly a gifted director of actors, whatever faults the film may have in other departments.

For the movie is not perfect. Storywise there are few surprises to be had here, and the camerawork is consistently zoomed in and shaking around. I realize this is not caused by bad use of technique but is done by choice, and gives the film a claustrophobic and restless atmosphere. You can overdo it though, because It makes for some pretty uncomfortable viewing after a while.
Still, "Breathless" shows a surprising amount of maturity for a first-time director. Yang Ik-June may have had directed several shorts during the past years, but feature-length filmmaking is a different game alltogether. He certainly seems to understand these rules as well though...

Yang Ik-June wrote the script, directed and produced the movie, and starred in it as well. Any blame or blessings must therefore be squarely placed at his feet. Thankfully, the blessings far outweigh the blame.

"Breathless" is an impressive directing debut and a big advertisement for the acting skills of both Yang Ik-June and Kim Kkobbi. I'll be closely watching their careers.


Needless to say, this movie is strongly recommended for those able to stomach the dreary subject.

My interview with Yang Ik-June
The "Breathless" page at the IFFR website.
See Yang Ik-June being mighty pleased...