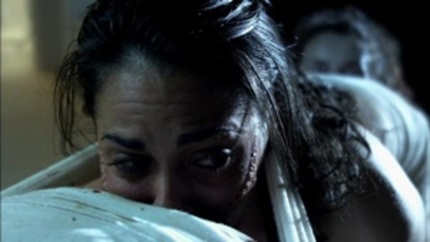 Tom Six's Eurocult film The Human Centipede is due to take a bow at Fantastic Fest later tonight and to get audiences hooked, the producers have just released the first clips from the film.

Tom Six's The Human Centipede (First Sequence) is an insane biological horror film that enthusiastically explores territory that few filmmakers dare to tread. In The Human Centipede, Dr. Heiter (Dieter Laser) is a leering, sepulchral surgeon from Germany whose specialty is separating Siamese twins. Dr. Heiter decides to evolve his craft by sewing together living beings together at the "mucous-cutaneous zone" (guess) in order to create Siamese triplets with a single digestive system. After his experiment in creating a three-segment rottweiler ("a beautiful three-hound construction") fails, Dr. Heiter tries again, shifting his attention to humans. First, a trucker is stolen away while relieving himself on the side of the road, Next, two clueless party girls who come knocking on Dr. Heiter's door after getting lost in the German forest get pulled into the experiment. After erasing the trucker from the picture, the doctor finds another victim: a crazed Japanese man wandering around Germany. The doctor concludes the initial phase of his experiment by splicing together the two girls and the Japanese man. At this stage, the film really goes berserk as Dr. Heiter attempts to impose his personal brand of order and discipline on an increasingly out-of-control situation.

Word on this one is that it is bizarre and troubling in the extreme.  Check the clip below!

did I just see what I saw ?
maybe I should unforget it

I am intrigued. and wish I could see more.

This movie seems oh so wrong! :)

Ugh! Either I'm getting old, or standards are dropping. This looks stupid, like most "independent" horror films.

I don't think my insurance covers this.

This looks great. Real body-horror that may just acheive what so many horror movies these days don't, namely horrify.

Darn. I thought this was about a mutant centipede woman. Although the thought of having your face sewn to someone's butt IS pretty terrifying.

Would it be funny if I said I was disturbed when I read the plot and watched the clip? Because I am. This is...gross. Fucked up. I really don't know what to say.

Could be an awsomely disturbing movie.