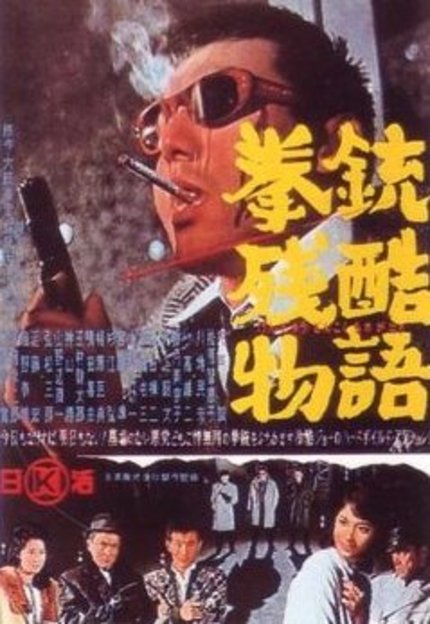 Note: Certain aspects of the film's plot are discussed, which may cause those allergic to spoilers to convulse.

Takumi Furukawi's Cruel Gun Story, which was released in 1964, is a snappy, suspenseful heist film centered around a great performance by Joe Shishido. The central character is Togawa (played by Shishido), an ex-con who is sprung out of prison early by the mob. In exchange for his freedom and some cash, the mob asks Togawa to rob an armored car carrying 120 million yen in gambling money from a race track. Togawa is skeptical, but his desire to help his sister Rie (Chieko Matsubara), who was crippled in a car wreck, leads him to at least entertain the idea. Togawa is given the names of three crooks to help him pull off the job. With the help of his old buddy Shirai (Yuji Odaka), Togawa tests the mettle of his potential partners in crime, and ultimately teams up with a punch-drunk boxer named Okada and a dope addict named Teramoto. Once Togawa commits to the heist, his well-thought out plans to get rich and help his sister are inevitably derailed.

Joe Shishido is at the center of attention in Cruel Gun Story, playing a familiar "tough guy with a tortured soul" role with a few additional layers. For example, Togawa has a wise-cracking humor, delivering sarcastic one-liners punctuated by a quizzical musical motif. Also, Togawa's reprobate behavior largely originates from his empathy for his sister Rie, thus adding the requisite element of tragedy to the story. These little details really help flesh out the character. Unlike in A Colt is My Passport, Chieko Matsubara doesn't really have much to do here as her wheel-chair bound character is ultimately just a living symbol of Togawa's guilt.

The narrative follows heist conventions with some twists, and switches into full-on revenge mode in the third act. An interesting thing to note is how the the big heist is handled. In the first act, Togawa runs through the robbery plan with his cronies, and each step of the plan is visualized. When the plan is executed in the second act, the film runs through the exact same set of steps, but adds a major twist. This is a simple yet effective approach to create suspense. Once the big heist takes place, a new set of concerns are introduced, which keeps the film steadily moving up until the final frame.

The presentation of this black-and-white film is on par with A Colt is My Passport with a 2.45:1 widescreen transfer with English subtitles. The next title to be reviwed from the Nikkatsu Noir box set from Eclipse, which is a Criterion sub-label, is Seijun Suzuki's Take Aim at the Police Van (1960). Suzuki's film is a bit different than the other titles in this box set from Eclipse discussed so far, perhaps reflecting both an earlier approach to similar material and Suzuki's idiosyncratic style.