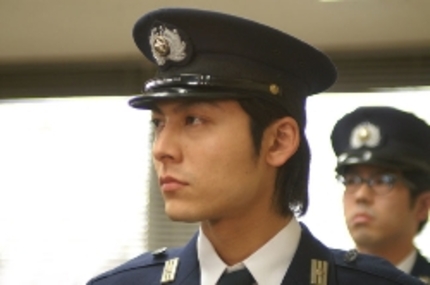 [Our thanks to Christopher Bourne for the following review.]

Hajime Kadoi’s contemplative second feature Vacation explores the relationship between Toru (Kaoru Kobayashi), a prison guard at a high-security facility, and Kaneda (Hidetoshi Nishijima), a condemned prisoner soon to be executed for murder, who has spent most of his years in prison appealing to the authorities for clemency. The “vacation” of the title is granted to Toru for volunteering for the traumatic task of assisting in Kaneda’s execution by leading him to the death chamber and holding his legs as he is hanged. Making this much harder for Toru is the fact that he has developed an unexpressed fondness for this quiet prisoner, who spends his days in his immaculately furnished cell drawing in his sketchbook. For his efforts, Toru is given a week off to have a brief honeymoon with his new bride, divorced single mother Mika (Nene Otsuka), accompanied by her young son Tatsuya (Shusei Ito).

The film is elliptically edited, jumbling its chronology in a way that is not obvious at first, but gradually becomes more apparent as the film progresses. This fractured-narrative strategy serves to throw the contrasts between the scenes of the couple on their vacation and the execution that has made this outing possible into much sharper relief than a strictly linear presentation of events would have. Much of the film focuses on the long-time employees of the institution, which are quite a motley bunch, most notably the cynical, wisecracking Mishima (Ren Osugi), the green rookie Otsuka (Shuji Kashiwabara), and the soon-to-be retired Sakamoto (Shun Sugata). Despite the brutal elements of their work, they all look upon this as a job like any other, and though what they see daily no doubt takes its toll on them, they remain stoic in the face of it.

Also striving for stoicism is Kaneda, Prisoner #350, who concentrates on his drawing and collecting photographs ripped out of magazines for inspiration. However, he has gradually become beaten down by the futility of his appeals for clemency; his exhaustion is so complete that when his sister visits, he can no longer bring himself to even speak a word to her. When the word comes down that his execution will proceed, all his careful calm evaporates in an instant.

Toru, meanwhile, is learning to get used to his new life as a married man, in an arranged marriage (set up by his sister) to a woman he barely knows, with a son who is aloof and initially resentful of the man who will be his new father. Mika, for her part, is still feeling Toru out but is cautiously optimistic that marrying him is the right decision, but still worrying about how this will affect her son. The film alternates between the realms of Toru’s domestic situation and his work at the prison, connecting them in ways that sometimes unnecessarily drive home the parallels between them, for example making both Kaneda and the young Tatsuya have an artistic bent, and mirroring shots of an ant crawling across a tatami mat in both narrative sections.

However, these details may also be in the film’s source material, a short story by Japanese novelist Akira Yoshimura, who also wrote the novel that was the basis of Shohei Imamura’s film The Eel. Vacation, however, is as far from the anarchic earthiness of Imamura as one can get, its visual compositions almost fastidious in their stark, antiseptic qualities. The performances are mostly restrained and often unnervingly calm, with Ren Osugi popping up every now and then to bring some needed comic relief. While Vacation admirably avoids the temptation to become a simplistic polemic against capital punishment, this strategy, along with the distancing effects of its jumbled timeline and cool austerity, unfortunately robs the film of the heat that would make it a much more emotionally resonant experience.

Vacation, a co-presentation of the New York Asian Film Festival and the Japan Cuts Festival of New Japanese Film, screens at Japan Society on July 3 at 4pm.