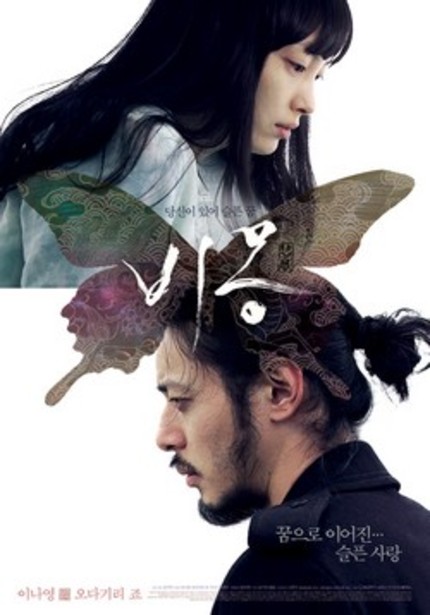 [Our thanks to Justine Smith for the following review.]

DREAM is the latest effort from acclaimed filmmaker, Kim Ki-Duk, who is best known for his human dramas infused with Buddhist inspired ideas and style. In his first foray into fantasy he remarkably, brings little new to the table, while the film also lacks the simple profundity that made his previous efforts so beautiful.

Waking from a particularly vivid nightmare of a car crash, Jin’s curiosity drives him to the scene of the accident, only to find it was real. While disturbing, the fact that surveillance evidence puts a young woman, Ran, at the scene of the crime, instead of him, has Jin searching for answers. The common link between them is that both have recently separated from a significant other. The polarity of their reactions; one yearning for lost love, while the other seeks to erase that part of their life, seems to be the tie that binds them. It is that need for the universe to balance itself out that brings these two strangers together.

Though an interesting premise, the film is little more than a string of repetitive actions and ideas. The film inevitably feels empty, as there is little sense of dread, and even as the situation worsens, the emotions never resonate with the viewer. This is due to a combination of uninspired acting (by the attractive, but bland leads), and some poor direction and writing.

The film ignores largely the ideas that are suggested by the premise and context of the film. Jin’s own inability to separate his longstanding feelings for his girlfriend from the fantasy he creates is poorly handled. There is the idea that we are all more alone in our dreams than in any other situation, but the film fails to highlight why Jin is holding onto these fantasies, consciously or not, as well as the real emotional consequences of choosing fantasy over reality. His struggle to stay awake feels thematically shallow, as it is motivated almost solely by his concern for the well being of Ran, which is noble, but uninteresting.

This is further complicated by the film’s conclusion that seems to herald the spirit over the body. DREAM allows the idea that the struggles of love and hate are as difficult as the struggle against something as necessary as sleep, but the final “win” for the soul lacks any gratification because the soul is not allowed enough screen time. It is clear quite early in the film that the body is at best something that needs to be controlled, and at worse, a prison, but the other side of the story is underdeveloped, so the conflict is skewed and therefore, unengaging.

Perhaps it goes without saying, but the themes of both interconnectedness and the struggle between body and mind, have been handled far better in film history. They are not new ideas, though that does not mean they cannot be handled with grace or intelligence, it just so happens, that this film lacks much of both. Even the obtrusive musical score and purposefully choppy dream sequences evoke an ugliness that only further alienates any attempts at profound commentary on dreams, balance and control.

The film will no doubt divide audiences, as so much is hanging so much on the viewer’s ability to empathize with the characters, and where it failed to grab me, it will no doubt inspire many others. Hopefully In the case that this film is your first exposure to Kim Ki-Duk, that you will enjoy it enough it enough to seek out some of his better known efforts, especially my personal favourite, SPRING, SUMMER, FALL, WINTER…AND SPRING.

Do you feel this content is inappropriate or infringes upon your rights? Click here to report it, or see our DMCA policy.
Ki-duk KimJoe OdagiriNa-yeong LeeMi-hie JangTae-hyeon KimDramaFantasyMystery