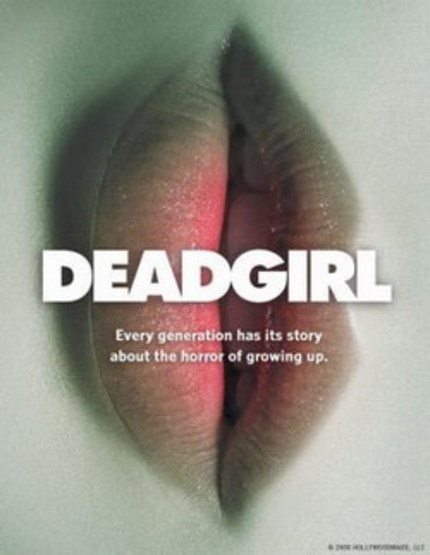 This past Friday was the New York premiere of Marcel Sarmien and Gadi Harel's coming of age horror flick Deadgirl. Co-director Harel was in attendance (as were a pair of single-digit aged relatives) for a midnight screening that played to a packed house of the curious and the depraved. The understated Harel introduced the film with little fanfare, clutching a plastic shopping bag as if he had just returned from the supermarket. He promised to return after the film for a Q&A, and did, clutching the same bag like some sort of non-biodegradable security blanket.

This film has been reviewed on ScreenAnarchy before, when it debuted at the 2008 Toronto Film Festival, so I will forgo the lengthy plot synopsis. The premise is simple- two kids cut school and find a naked girl tied up in the basement of an abandoned insane asylum. Not only is she alive, she is undead. One kid displays a conscience; the other decides to make her his personal zombie sex slave.

This is a fantastic premise, one that is unfortunately bogged down by less than stellar acting. In fact, I'd credit the acting with most of the films problems. During the Q&A, Harel said he didn't mind that people laughed during the film, even at parts that weren't supposed to be funny, because he understood it was a nervous reaction to the material. I found this to be only partially true. There were moments that were so unintentionally funny they had the audience howling like wolves. These moments can only be blamed on the caliber of the performances. It has other flaws, but with stronger leads this would be an infinitely better film. The only exception would be Jenny Spain, who plays the titular Deadgirl, in what is primarily a physical role.

The unintentional humor is also the cause of broad tonal shifts throughout the film. What started out as a pretty serious take on male sexuality had them rolling in the aisles by the time the lights came up. Harel said the film wasn't a comedy, so one has to wonder about the schizophrenic tone. If the film had committed one way or the other, it would have been easier to appreciate. In it's current state it just feels like it is unsure of what it wants to be.

The feminist subtext of Deadgirl, with its depiction of men willing to fuck anything, is immediately apparent, and was one of the few audience interpretations Harel was willing to corroborate. According to him, women seemed to really connect with the film, while the men tended to be the squeamish ones. He didn't go as far as saying it was because it forced them to face aspects of the characters they saw in themselves, but he didn't have to.

Even with all the sex and nudity there is little here to titillate. The film has some pretty sick moments that are sure to outrage the morally indignant. That being said, the two children in the audience seemed relatively unfazed. In a particularly inspired moment, Harel told their father he was either the greatest or the worst dad in the world. I tend to agree.

Despite my disappointment, I'm glad I saw the film. There is enough going on in Deadgirl to warrant a viewing for adventurous horror fans. There are some truly unsettling images and ideas at play, but the whole is not greater than the sum of its parts.

Overall the audience reaction was a positive one. The post-screening Q&A had your usual questions that weren't questions, just film students trying to impress, but there were a handful of legit queries. The drunk chick a few rows in front of me thought one of the leads was cute, and looked like Joaquin Phoenix. Harel took it all in stride and beamed like a proud poppa. The man truly loves his film. I wish I could say the same.

-----
Joshua Chaplinsky is the Managing Editor for LitReactor.com. He has also written for ChuckPalahniuk.net.

Loads of Deadgirl coverage in the archive. It's there for the searching.