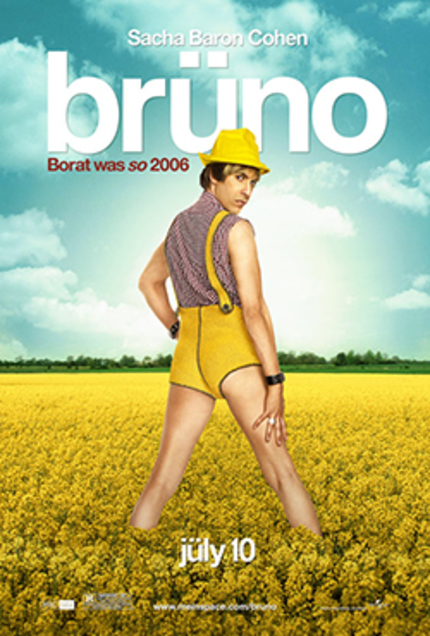 Once you’ve seen “Brüno”, you may never look at your penis the same way again (where applicable, of course). The film is the latest from the seemingly fearless comic actor Sasha Baron Cohen, and like his previous hit, “Borat”, it is a difficult-to-label smash-up of “reality” and staged spectacle. Also like “Borat”, the story follows an eccentric foreigner on a simple quest, making for many awkward interactions with unsuspecting victims. Where Borat was on a mission of understanding, Brüno is out to become, as he puts it, the biggest Austrian celebrity since Hitler. This takes him all over the world, but mainly to various parts of the United States, including Hollywood, and the Deep South.

In all of this – and this includes Cohen’s “The Ali G Show” television series from whence these characters originated – Cohen’s mission seems to be one of harshly exposing ignorance and intolerance, in the most comedic and confrontational way. With “Borat”, it was an exploration of the xenophobia lurking in America (particularly in the South). This time, Cohen presents a double-whammy of sorts. Yes, to call Brüno “flaming” is like calling Freddie Mercury an “okay” singer, but his over-the-top homosexuality is just one part of what makes the character alienating for many. I posit that, like Borat, it is the fact that Brüno is foreign, complete with a heavy accent and token broken English that makes him just as alienating, if not more so than Borat, to good number of the unsuspecting foils in the film.

If “Borat” pushed the envelope of comedy and good taste, “Brüno” humps it into oblivion. The opening penis line of this review is in reference to a particularly bizarre moment in a TV pilot that Brüno creates involving a crazy gyrating male member that seems to occupy far more screen time than I’m sure it actually does. Just when you think it can get no weirder, while feeling the full pain of the people tricked into watching this in the film itself, the gyrating stops, and… No, that’s saying too much. But if that notification of full frontal male nudity isn’t enough to convince you that Cohen means business, the opening minutes of “Brüno” features what could be described as Tex Avery’s version of man-on-man action, between Brüno and his “pygmy lover” (played by an actor who appears disturbingly underage - although the closing credits claim that not to be the case). Once the dust settles, and the lover has left him, Brüno proceeds to haul his sex-toy-modified exercise bike with him throughout the film. (No doubt he’ll need it…!) This is just that kind of movie.

Along the way, Brüno’s mission is modified several times (perhaps due to true-life recognition of Cohen?), eventually setting him on the course to “go straight”. Naturally, this is just an opportunity for Cohen and director Larry Charles (“Borat”, “Religulous”) to spotlight what they perceive as ignorance and buffoonery on the part of the individuals confronted, as well as the culture as a whole. They do encounter some anti-gay mean-spiritedness, but one must also ask if their own underhanded methods aren’t at least as equally mean-spirited? Of course, in the end, that doesn’t matter so much as one other, bigger point of the film: Is it funny? That would be a big yes. “Brüno” is one hilarious scene after another. Even when you’re horrified or cringing, Cohen’s take-no-prisoners brand of comedy/performance art wins out. I admit to spending an inordinate amount of time during the film wondering just what was staged, and to what degree. But like I inferred, the bottom line for a comedy is whether it’s funny or not, and “Brüno” certainly is. If you liked “Borat”, “Brüno” is the next awkward step.

Cohen and Charles strive to be equal opportunity offenders, and this is their loudest, most polished attempt yet. You won’t believe what the parents of toddler performers tell Brüno in order to get their kids considered for his project. You will laugh hysterically at Brüno’s martial arts lesson on how to defend oneself from an attacking homosexual, courtesy of the worlds most naïve karate instructor. And let’s not forget Brüno’s show stopping interview with the one and only Harrison Ford!

Similar to Borat’s character, Brüno has a certain spark of charisma that makes him hard not to root for - despite all his weirdness and quirks. Any allegations of mean-spiritedness aside, Cohen and Charles know how to intermingle all the elements they put uniquely into play, and subsequently graft an unforgettable experience. Will they be able to pull it off again? If so, Cohen better create some new characters. The schick could easily become transparent and worn, (where would they go from here, anyhow?) but for now, it still works. Besides leaving us unable to look at our own penises same way (where applicable, I restate), the filmmakers clearly hope to also influence the way we look at the rest of the world, and those in it. And sometimes looking away from ourselves, beyond the born-in attitudes and trappings of our surroundings is just what we need.

Of course, a good dick joke is alright too.

"the filmmakers clearly hope to also influence the way we look at the rest of the world, and those in it."

I don't know. I'm always suspicious of talking points like that. Like people would think he was an asshole and not go see his movie if he said "I just want to make people uncomfortable and do the funniest and most offensive things possible" ... which is what I believe he is motivated by, but again, I don't know.