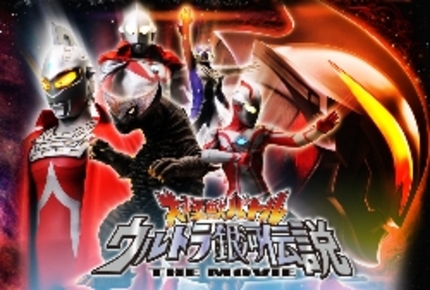 [Missed this one while out of town last week but am making up for it now!]

What do you do if you're the producer of a venerable scifi franchise and you have to follow up an entry that featured not one and not two but a whopping EIGHT variations on your hero? If you're the folks behind Japan'sUltraman franchise - about to hit its thirty eighth installment! - you trigger a mega monster battle, of course! And also recruit a whole lot more Ultramen.

The evil Ultraman Belial was imprisoned by the Ultraman King tens of thousands of years ago. When he finally escapes, he attempts to use the Giga-Battlenizer to control 100 giant monsters and conquer the galaxy. On the Ultraman homeworld, where there is no 3-minute time restriction, a team of 50 Ultramen including Ultraman, Ultra Seven, and Ultraman Mebius among many others mobilize to put a stop to Ultraman Belial’s plans and face off against his monsters.

Bad Ultraman plus one hundred giant monsters versus a team of fifty good Ultramen? Madness, I say. Madness. And the first glimpse of the madness can be seen in the teaser below the break.

Visit the official site
via Nippon Cinema and the ever-vigilant Captain Awesome.