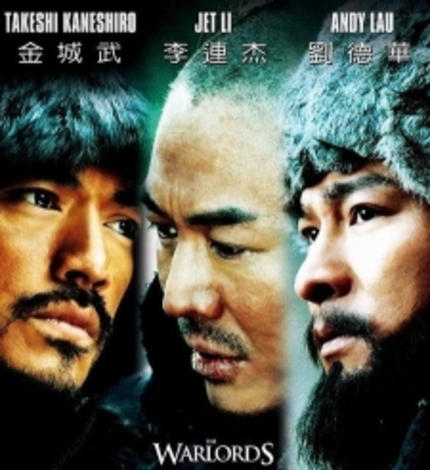 I know what you're thinking. Warlords is not the newest of films and there have been three reviews up on ScreenAnarchy already. Well, guess what. Here's a fourth. Why? Just because I liked the film that much and believe it deserves more global attention.

I'm a sleeper fan of Peter Chan. I favored his entry in San Geng and was pleasantly surprised by Perhaps Love. I'm pretty sure it was the first time I watched a musical I actually enjoyed. So with dread I saw him take on Warlords, a film that sounded so big and vast that I feared he had sold his talent to a simple blockbuster in which he would have little say. I was wrong, obviously.

Read the juicy bits after the break:

Warlords (or Tau Ming Chong if you wish) is an early adapter of the recent Chinese battlefield flicks mini-hype. With John Woo's Red Cliff project, Siu-Tung Ching's An Empress And The Warriors and Daniel Lee's Three Kingdoms it forms a strong alliance of films bringing honor and fame to some of China's biggest wars and leaders. I'm usually not a big fan of these type of films so I had little motive to track them down, but since Chan's positive image got the best of me after all I'm doing some very swift catching up. So far, Warlords is easily the most interesting of the bunch.

My initial fears laid with the three main actors of the film, withstanding that I like all three of them a lot. Li's an awesome fighter, Lau's all around great and Kaneshiro has plenty of presence to bring to the screen. But bringing those three into one film means plenty of star power to manage, and plenty of money on the table. Producers can get itchy, egos might inflate and directors might be left helpless in the midst of it all. But there seems to be nothing of that in Warlords, on the contrary. These three gentlemen really bring the film to life.

Admittedly, they have interesting characters to set them on their way. When the three meet and vow to lead their people to safety, forming a blood bond, the audience is already up to par on the fact that there are going to be plenty shades of grey, and little black and white purity to behold. Li's character is knowledgeable, just and fair, but he's also ruthless in meeting his goal. He is the kind of man that doesn't blink if 4000 prisoners of war need to be killed to safe 50000 civilians. Lau's character is more primitive, darker and manlier. But he is also a man of honor, who gives his word only to keep to it. Completing the triangle is Kaneshiro's character, much softer and kinder than both of his peers, but someone with his priorities neatly lined up, able to kill those very close to him without flinching to protect those even closer to him. I found him actually the most interesting of the three, as his determination in choosing priorities is something you don't often see in film characters.

The thing that really surprised me is that Chan is really making a film about these three people. Oh sure, there are battles, some big ones too even, but the grand finale is not on the battlefield. By the time the film is nearing the end, we haven't even seen a battlefield for about 30 minutes. Want more proof? The big, main, what-they-all-fought-for battle lasts about 1 whole minute. Quite something I didn't expect from a big film like this. Not to say that the happenings around the whole blood bond are very original, but with three actors perfectly cast and each giving solid performances, there is plenty of fun to be had from their relationship, eliminating the need for big battles to carry the film.

The battles themselves are not bad either. Still not a big fan of these skirmish scenes, which often have little more value than simple filler (random shots of people fighting until the director decides it is time for another key scene where the viewer is informed about the state of affairs), but the individual scenes, especially those with Li, feature some pretty cool fights going beyond the typical hack & slash fair. Comparing to the action scenes of Lau and Kaneshiro though, it's still painfully obvious that real life fighting skills do matter.

It is said that Warlords takes on a more realistic approach, which is true if you compare it to films like Hero and House of the Flying Daggers. On the other hand, this is hardly realistic warfare, with people slashing through hordes of simple swordfodder, displaying some uncanny fighting skills. Not that this is a bad thing, but what people really mean is that the fighting here is a lot darker and his a more grimey edge to it. This is mimicked in the visuals which are all very moody, featuring plenty of dark blue and grey overtones. Very nice to look at and often featuring some neat editing to make the atmosphere even a little heavier than it already is. The score too is nice and doesn't feel as needlessly bombastic as often the case in films like this.

So in short, Warlords is an awesome film about three beardy men with balls taking their little army to conquer nations, but failing to keep in control over their own friendship. The fact that Chan puts most of the stress on this relationship rather than on the actual battles fought is a big plus, the strong and charismatic performances of the three leads only add to the joy of it all. If you're expecting some overblown war action you might feel a bit cheated as there isn't as much as you'd expect in a film like this, but for me it can only be seen as a definite plus.

Interested in what other Twitchers had to say? Check out The Visitor's review, Stefan's review or Todd's review.