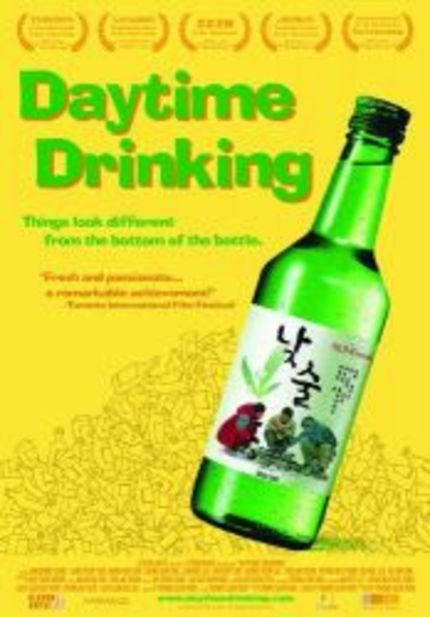 Already screened at half a dozen film festivals worldwide (including Toronto and Rotterdam), with still a few more on the horizon, Daytime Drinking, the ultra low budget road movie by Noh Young-seok, signals the arrival of a fresh new voice in Korean cinema. While Noh -- who served as writer, cinematographer, producer, editor and composer on his debut film -- may not yet be a household name like festival regulars Hong Sang-soo or Lee Yoon-ki, judging by the reception of Daytime Drinking, he soon will be.

Seoul, wintertime. Hyeok-jin (Song Sam-dong), just out of college and forlorn over being dumped by his girlfriend, is persuaded by his drinking buddies to take a trip together to Jeongseon, a small village where a former classmate of one of his friends runs a small pension. The following morning, Hyeok-jin arrives at Jeongseon bus terminal, only to discover that his friends are too hung over to join him. He is ready to turn back, but after phoning drinking buddy Gi-sang (Yuk Sang-yeob), he is convinced to go to his friend's boarding house anyway -- there will be delicious barbecue food and booze waiting for him --Gi-sang promising to join him in a couple of days.


What follows is a series of mishaps and misunderstandings, with Hyeok-jin spending a lot of time pacing back and forth in his room or at the bus stop, sitting around drinking booze and smoking cigarettes, followed by yet more drinking, either singly or with his newfound companions. Misfortune seems to follow him wherever he goes, as he unwittingly makes the acquaintance of a rogues' gallery of characters -- a disagreeable woman he encounters at the bus terminal who insists on reciting haiku to him, an unaccountably hostile innkeeper, an overly solicitous young couple, a creepy truck driver -- the unpleasant sort familiar to anyone who has done a bit of traveling. Meanwhile, Gi-sang, who has promised to join him in a couple days, keeps postponing his visit... As Hyeok-jin's predicament goes from bad to worse, it is hard not to suppress a faint smile of recognition at Noh's delightfully perceptive script.


Song Sam-dong is excellent as Hyeok-jin, neither overly expansive or excessively brooding, but good-naturedly taking life's vicissitudes in stride. The rest of the cast turn in very believable performances. And while the film features excessive imbibing, we are thankfully spared exaggerated scenes of drunkenness and hangovers. The music, written by the director, consists of a jazzy guitar riff that is used very sparingly throughout the film.

Daytime Drinking will soon be hitting US and Canadian shores via Eleven Arts and Evokative Films.