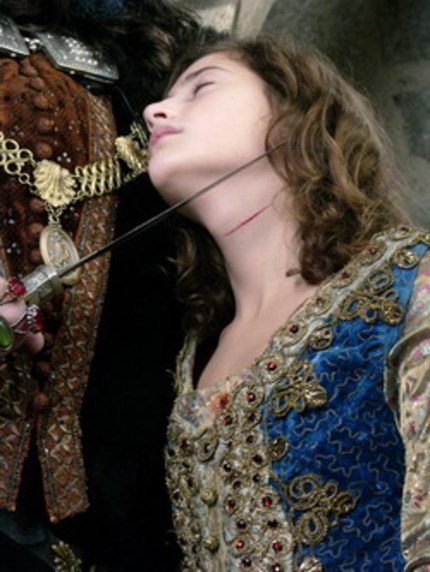 One of the highlights of last year's San Francisco International (and of the 2008 festival year period) was the opportunity to sit down with the incandescent Catherine Breillat to discuss her provocative opening night feature The Last Mistress. Though unfortunately not in attendance at this year's festival, Breillat has sent on her new period piece Bluebeard (La Barbe Bleue) for its North American premiere in SFIFF52's World Cinema sidebar, which Richard Avila accurately describes as her "playful, intoxicating and highly personal rumination on Charles Perrault's 17th-century fairytale about a gloomy nobleman with a penchant for murdering his wives."

As synopsized at the film's website: "Fairy tales often have main characters who are sort of serial killers of children: in other words, ogres. But Bluebeard is its symbolic figure. In the 1950s, it was also the favorite tale of good little girls. One of whom is Catherine, who loves to frighten her older sister Marie-Anne, by reading this fairy tale to her until she starts to cry. But Catherine also puts herself in the fairy tale by becoming Princess Marie-Catherine, Bluebeard's last wife, the one who escapes the fate of all those he hung before her. Because she is the virgin princess that the ogre cannot make up his mind to kill. This hesitation will doom him. So the virgin gets the head of the giant."

Before Walt Disney sought to sanitize the literary heritage of fairy tales, leaching them of the power of their darkness and what they had to teach about violence or—more accurately—the fear of violence, fairy tales often served as dark mirrors prime for scrying and fraught with revelation. Breillat's Bluebeard serves no less a function. Though not as sumptuous or reckless as The Last Mistress, Breillat's follow-up period piece darkly reflects 16th century French manners and joyfully adapts Perrault's somber tale with feminist willfulness and a painterly sensibility.

At its World Premiere earlier this year in the Panorama Section of the Berlinale, Daniel Kasman detected affinities between Breillat's Bluebeard and Manoel de Oliveira's Eccentricities of a Blond Hair Girl; namely, in their "same vital interest in the chaste strictures of an older society." At The Observer, Nick James noted the same connection insofar as both films "showed the continuing artistic dominance of classical pre-digital filmmakers." James found Breillat's Bluebeard a "small gem" and "magical and eerily gorgeous", maintaining that "[s]exual power relations are as key here as they were in Breillat's scandalous Romance and Anatomy of Hell but this time she prefers an implicit approach in which the lovely frail young bride [Marie-Catherine, played by Lola Creton (who Avila describes as "sparkling" and "effortlessly voluptuous")] seems in total command of her huge world-weary, wife-slaughtering husband [played by Dominique Thomas, whose performance Screen Daily's Jonathan Romney describes as "at once baleful and charming"] and defiant of the fate of her predecessors." Romney further describes Bluebeard as "an elegant exercise of style with a sly humorous undertow" that "shows the director on her most controlled cerebral form, even in this minor key."

Willful defiance—or as Romney states it, girlhood's "rebellious impulse"—does, indeed, charge this narrative. One might even say that it is represented by the bloody key that reveals the horrible evidence of Bluebeard's forbidden chamber. From the beginning, Marie-Catherine is not fearful of death—neither the death of her father nor the prospective death at the hands of the notorious Bluebeard—and chides her sister Anne for being frightened or, more importantly, for not understanding that love conquers death. If anything, disaster rides on fear, as is illustrated in the film's framing story of the two young sisters who have withdrawn to the attic to terrify themselves by reciting the tale to each other. Breillat's familiar penchant for depicting sibling rivalry is eloquently doubled—one might say layered—in Bluebeard.

My favorite write-up, however, remains Kevin Lee's for The Auteurs: "Five years ago one might have shuddered with dreadful anticipation at what Breillat version of a children's fairy tale might look like, but following The Last Mistress the sexual provocateur seems to be focusing her subversive impulses squarely on the contradictions within the source material. Despite being filmed with clinical flatness in unflattering low-fi digital, Breillat's interpretation of the story becomes a complex celebration and critique of feminine will. An initially awkward framing device in which two girls read the story to each other proves to add a valuable layer illuminating the contradictory impulses of delight and repulsion that bind a girl to her fantasies, and the dynamic of feminine empowerment and servitude that's reflected in Perrault's fairy tale."

To its closing image—reminiscent of the paintings of Caravaggio—Breillat achieves an elegant economy in her latest film, having tempered her rebellious explicitness as a younger director intent on provoking for provocation's sake. In Bluebeard, her story serves the story.