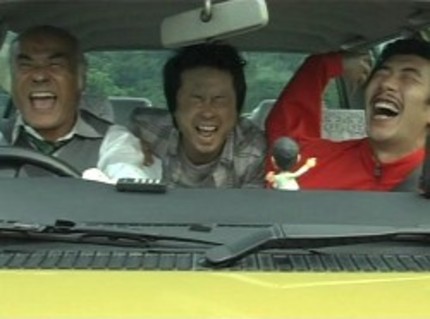 Sometimes you come across a picture so absurd, so chaotic, that you cannot say a sensible thing about it afterwards except that you obviously didn't "get it". This happens a lot with shorts that are meant to be artistic, but this level of bafflement is rarely found in anything longer than 10 minutes.

So my first damning praise for Jo Odagiri is that he managed to do just that with "Looking for Cherry Blossoms" even though it is almost a full feature at 63 minutes length.

Therefore I do not dare put my review up here just by its lonesome. Thankfully I have colleagues and both are called Peter: GhibliWorld.com's own Peter van der Lugt and oftentimes contributor Peter Cornelissen, whose review I'll shamelessly lift from his excellent IFFR round-up article last month.

Therefore, completely in style with the chaos portrayed in the film we give you no less than three opinions: one of liking the movie, one of disliking the movie and one of thinking it's weird.

Find them after the break!

Three reviews, aptly named The Good, The Bad and The Weird.


The Good (by Peter Cornelissen):

(taken out of a longer article, found here) I have saved the best for last (although the audience response to this one was generally negative) with the very popular actor Jo Odagiri’s directing debut "Sakura na Hito-tachi" (2009) "Looking for Cherry Blossoms". It’s a short, purely absurd movie about the journey of three guys in search of a fabled cherry tree. It’s not the kind of film you might expect if you know his work as an actor. Even I got (positively) surprised by the hysteric level of comedy that left most people scratching their head. It’s hard to find something to compare it with to give you a sense of it’s style, as I can only think of Dutch comedy shows like “Rembo & Rembo” and “Jiskefet” at the moment, but maybe “Monty Python’s Flying Circus” comes close.

If you’ve got low tolerance for nonsense this is not for you. I however loved it more and more with every minute and in the end, when the tree is almost reached and only one of the guys is spiritually able to go on and lay his eyes upon it, the film even reminded me of something so profound as Tarkovsky’s Stalker. I was, how can I describe my feelings, moved. It has the look and feel of a small anarchic hobby project, so I might be overrating this slightly from an objective standpoint, but for me this really was the film of the festival!

Expectations can be a killer so I try not to have any when visiting a cinema. But you always take your own preconceptions with you, and have an idea of what a movie ought to deliver. So call me old-fashioned, but when a movie sells itself as a comedy I expect to be able to laugh, or at least be amused a bit. "Looking for Cherry Blossoms" failed to make me laugh at all, although I did giggle two or three times.

The story starts with a man who visits his lonely grandfather in hospital and is puzzled to discover Gramps gets a card every day, featuring a picture of a beautiful cherry blossom tree. A coincidentally passing cabdriver states he knows which tree it is and offers to take the man to that place. What follows is a deconstruction of the typical roadmovie as the two try to reach their goal. Which is not as easy as it sounds, especially after they run over someone and take him aboard as a third voyager...

All of which becomes hard to watch after a while as Odagiri gives nothing for the audience to hang on to. Just before the halfway point, after an (admittedly amusing) animated sequence the central character loses his marbles and becomes as crazy as the others. This is unfortunate as he was the only one the audience could identify with. All three just keep pulling funny faces, yelling incoherent sentences at each other and acting as mad as a bunch of hatters. I see there is a parody of a roadmovie in there but it got old fast. For me the movie started to drag even with its short running time, and I left the cinema thoroughly confused and even a bit angry.

This year’s edition of the International Film Festival Rotterdam brought its audience the directing debut of Odagiri Jō. Yes, Japan’s well known actor Jo Odagiri! And the title of his film, for which Odagiri-san also handled the script, cinematography, editing, and music: "さくらな人たち". Or, for the Japanese impaired, "Sakura na Hito-tachi" as in "Looking for Cherry Blossoms".

Interestingly, this film is indeed about (three men) “looking for cherry blossoms”. Now a lot of people might wonder “Why make a film about three men going on a trip to look for some beautiful sakura?” (actually they are looking for one specific tree), but that is not the point. They might as well have been looking for whatever popped up in Odagiri’s mind. Odagiri’s mostly musicless film is not about telling a story, but more of a ridiculous artistic experiment mixing a totally absurd kind of humor and giving its viewers an indescribable feeling. There's Looking for Cherry Blossoms’s wickedly animated scene in which protagonist Tsuyoshi falls out the taxi… or the 10 minute long nude scene at the end of the film... There’s much more to tell about it, but the major thing about Odagiri’s directing debut is that it’s something people are either going to extremely hate or extremely like. It is:

- immensely Japanese
- pretty weird
- and for me… quite likeable.

(Ard here again: please note that Peter van der Lugt and I interviewed Jo Odagiri about his movie, an interview which was almost as wild and chaotic as the movie itself.

This interview will be posted.... soon! )

Our interview with director Jo Odagiri and stars Sabu Kawahara and Hiroshi Yamada!
More info on this film can be found in the IFFR 2009 webpage.