IFFR 2009: THE FIXER: THE TAKING OF AJMAL NAQSHBANDI Review 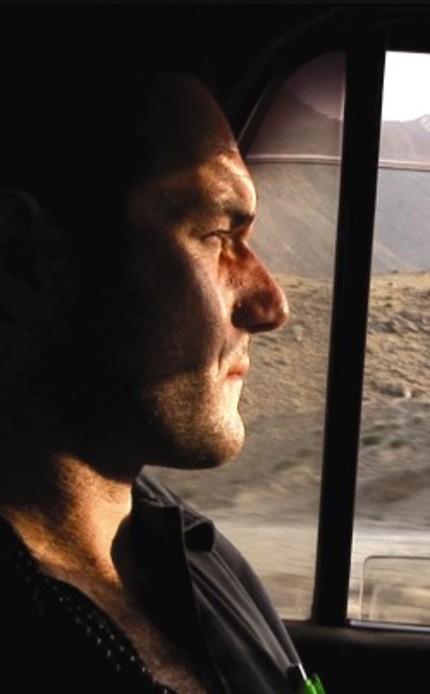 If you take a look at the final audience rating list of the International Film Festival Rotterdam, you'll notice that one of the highest positions is actually held by a documentary which had its World-Premiere there.
And you might want to take a good look at the rating next to it: a whopping 4.36 out of 5. Very high considering the way these scores are calculated, especially since there will always be some people who totally disagree with either the message of a documentary or the way in which the subject is shown.

So you might assume this is a crowdpleaser.
But "pleaser" is the wrong word here, as there is nothing entertaining or amusing about what happened to Ajmal Naqshbandi.
It's not a crowdshocker either, as director Ian Olds thankfully has an excellent sense of taste and a dislike of both spectacle and fake sentiment.

Crowd-silencer probably comes closest, as "The Fixer: the Taking of Ajmal Naqshbandi" left the audience in Rotterdam speechless for several minutes after the ending, at each of its three public showings.

In 2007 Ian and his team were documenting the way in which so-called local "fixers" were helping foreign press crews get their footage in Afghanistan. Ajmal was reputedly the best fixer there was so he became the focus of the documentary.
Little did Ian know that his subject was about to be kidnapped and decapitated by Taliban extremists.

Whenever a European, Asian or American newscrew wants to visit Afghanistan they will need help. The landscape is rugged to the point where some borders are still undefined, the many different people living there speak in many different tongues, and customs sometimes vastly differ from what we would consider usual.

Oh, and there is a war going on as well.

In short, you need a guide, a translater, someone to help you find whatever it is that you are looking for. And this is where the fixers come in. Fixers are a sort of "friends" for hire, who will babysit a group of foreigners and try to help them achieve their goals, keeping them safe in the process. And one of the best of these fixers was Ajmal Naqshbandi, an Afghan journalist.

But in 2007 something went wrong: famous Italian reporter Daniele Mastrogiacomo wanted to interview a very dangerous Taliban warlord, and Ajmal helped set up a meeting. Unknown to them, the Taliban were planning a media-event of their own and decided to kidnap Daniele together with his driver and his fixer, threatening to kill them all as spies unless several demands would be met.

After the Taliban beheaded the driver they negotiated a trade of prisoners with the Afghan and Italian governments. Daniele was released but Ajmal was kept, and finally he also was beheaded.

Director Ian Olds makes it clear from the start that he in no way intends to wrench any thrills from this story, starting immediately with a clarification on how it all ends. Next he hops six months back in time and gives a layered description of the deteriorating situation in Afghanistan, the origins and successes of the Taliban, and the difficult work of a fixer. Ajmal Naqshbandi gets portrayed here as a funny and resourceful person, who is very careful not to end up in the position in which he, ironically, ended up. For Ian Olds shows how Afghanistan became even more volatile and unpredictable after the Taliban suddenly changed their strategy.

Worse, he shows the sickeningly integrated corruption in the civil and legal administrations, who blatantly misuse their power to extort as much money as possible out of whoever they think has any. High (or, rather, low) point of the documentary is when an American cameracrew finally, after much waiting and bribing, is allowed to film the court in Kabul sentencing a murderer, only to find out afterwards that it is all a reanactment staged specifically for them.

During all of this you see Ajmal discussing these things with his customers, his friends and his family, trying to solve his own troubles as well as those of the people under his care. He is certainly not deified but this makes him all the more human, and the end more heartwrenching.

Eventually the documentary arrives at the kidnapping of Daniele and Ajmal, and the disgusting aftermath. Everyone involved is interviewed including Daniele Mastrogiacomo himself, who is still obviously shaken and hurt by what happened during and after his release. It is shocking to see just how close Ajmal came to actually being rescued, until some assholes stopped paying attention.

Ian introduced the film himself, and had brought some of Ajmal's friends with him. Maybe that was partly what made this film hit as hard as it does, because when you see people from the movie reappear afterwards for a Q&A, you cannot help but notice the one person who could not be there.

For me, one of the cardinal rules of documentaries is that they should be interesting, otherwise what's the use? As such "The Fixer: the Taking of Ajmal Naqshbandi" is a huge success, as it delivers in spades. Not only does it describe the atrocity mentioned in the title, but the movie also gives a fascinating insight in the inner workings of a country which, however often mentioned in the news, remains a hopeless question mark.

Unless you get yourself a fixer, of course.

This film comes very much recommended, by me and the Rotterdam audience.

More info on "The Fixer: the Taking of Ajmal Naqshbandi" at the IFFR webpage