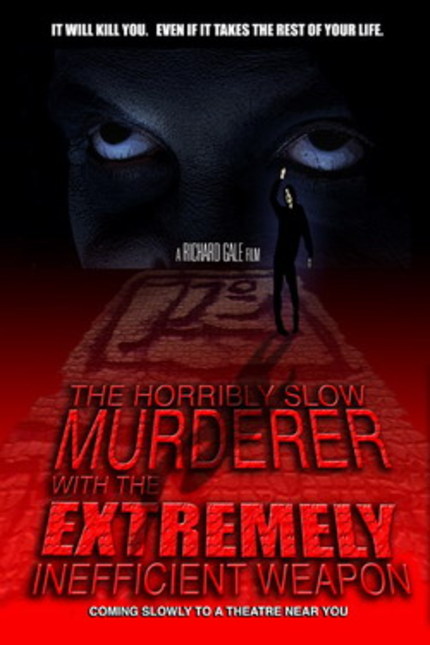 The "Really Scary Shorts" program in last year's Dead Channels Festival of Fantastic Film featured Richard Gale's Criticized, winner of—count 'em—15 film festival awards, including Best Short Film at Dead Channels 2007. With Criticized, Gale proved once and for all that it's the little things in life that matter in a horror movie. In his follow-up—The Horribly Slow Murderer With the Extremely Inefficient Weapon—Gale shifts from the office desk paperclip holder to the kitchen cutlery drawer. Already at its world premiere at Austin's Fantastic Fest last month, The Horribly Slow Murderer With the Extremely Inefficient Weapon won a special jury prize and saw its equally popular West Coast premiere in this year's Dead Channels' "Fantastic Short Films" program. At this point I have to officially crown Richard Gale as the reigning king of "object horror."

Last year during the Q&A after Criticized, Bruce Fletcher (with tongue in cheek) asked Richard Gale if he'd received any bad reviews for Criticized? Richard was quick to emphasize his film was not autobiographical and that everyone in the audience was perfectly safe. He assured them they could even tell him the film sucked if they wanted to, though I don't recall a single individual taking him up on that. The film, as most folks probably know by now, concerns a prominent film critic who writes a scathing review of a new horror film, and is then abducted by the film's mentally unstable director, who subjects him to an eye-opening experience.

Gale's inspiration for Criticized came from a real movie review of another person's film that he read in the L.A. Weekly many years ago where the critic actually wrote, "Hopefully, this will be the final nail in the coffin of this filmmaker's career." At the time, Gale thought, "Man, that's harsh."

Gale explained to his Dead Channels audience: "All you filmmakers understand how incredibly difficult it is to make a film, which is something some critics don't fully realize—some go too far and they all have their reasons for doing it—but, this review in the L.A. Weekly seemed like a good jumping off place for a story like this."

Gale has been planning a full-length feature of Criticized, which he promised would "not be 90+ minutes of bathroom torture." He qualified that Criticized is one short episode in the life of filmmaker Arthur Lements (Brian Rohan) and the full-length feature will show much more before and after, "possibly even involving a festival director" Gale added pointedly, staring directly at Bruce Fletcher (whose eyebrows hit the rafters). The feature-length version of Criticized will also include several scenes from Lements' film The Ultimate Terror, the very film scathingly reviewed by film critic Darian Stonehall (John Lynd).

Until the feature-length version of Criticized is finished, however, Gale has worked up The Horribly Slow Murderer With the Extremely Inefficient Weapon, which has the likely chance of repeating last year's win at Dead Channels.

Structured as a 10-minute trailer for a soon-to-open film, The Horribly Slow Murderer With the Extremely Inefficient Weapon had its world premiere at Austin's Fantastic Fest where it was included in a block of horror shorts with titles like Road and Snip, serving to make the title of Gale's film effectively stand out by contrast.

Before opening the Q&A to questions from the audience, Bruce asked Gale how long it actually took him to shoot his film with the incredibly long title and when audiences could expect the nine-hour epic? Gale responded that The Horribly Slow Murderer With the Extremely Inefficient Weapon was shot in about two and a half months, shooting on weekends, roughly 22 days of shooting. About halfway through the shoot Gale asked himself, "What the hell am I doing?" It was a short film that "metastasized into a gigantic project that wouldn't end." An important red flag would have been when he found himself describing his comedy short using the word "epic." An incredible amount of effort went into it for an approximate cost of $600, accomplished with his Panasonic HVX200 camera and Final Cut Pro. Gale's challenge was to see how epic-looking a film he could create for practically no money and the results are admittedly astounding. For the greenscreen effects he bought a swatch of green fabric, which he put up in his livingroom, thereby creating location sequences with the Kremlin and the Egyptian pyramids in the background. The Egyptian sequence, in fact, was shot in the Mojave National Preserve between L.A. and Vegas because he wanted to utilize one of the world's biggest sand dunes. Criticized's Brian Rohan returns as The Murderer.

I asked Gale about his focus on object horror. He responded, "I was inspired and influenced by the first Evil Dead with the No. 2 pencil in the ankle. There's something about very ordinary household objects that we're all extremely familiar with that can be used in horrendous ways. It's a little bit different and, hopefully, something you haven't seen before."

More about The Horribly Slow Murderer With the Extremely Inefficient Weapon