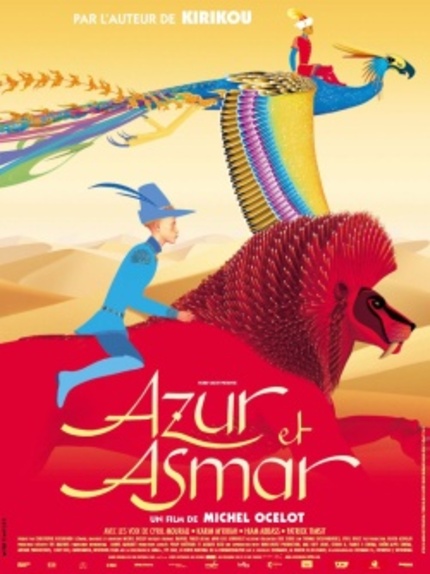 The French make some of the most beautiful DVD-packaging in Europe, and my home would be full of them if I wasn't so terrible at speaking or understanding French. For they hardly ever deign to put English subtitles on their movies. I always hope they'll use Dutch ones so you can cover the whole Belgian market but alas, that business model has apparently no merit.

It's not just the French either: many European distributors just don't believe in an international market.
Because of this, I often check the far East to score decent versions of European movies on DVD. Want the Scandinavian puppet epic "Strings" English-friendly, in widescreen and with decent sound? Go to China!

So even though I was delighted to see Michel Ocelot's recent stunningly beautiful movie "Azur et Asmar" get a UK release, old habits die hard and I checked our friendly Asian affiliate as well.

"Azur & Asmar" was championed and distributed in Japan by Studio Ghibli, and the Ghibli Museum even held an exhibition of Ocelot's art for the movie! This made him pretty well-known in Asia amongst animation fans, so lo and behold: the Koreans had copied one of the French special editions, adding English friendliness to a killer French packaging!

We like us some Ocelot here at ScreenAnarchy: Todd already gave his pretty spot-on review last week, and GhibliWorld.com's Peter van der Lugt had a very extensive interview with the man himself.
But if you're curious what (else) I thought about "Azur & Asmar", or are interested in this specific edition, then read on after the break!

A French nobleman hires a Saracen woman to nurse Azur, his infant son. The child grows up together with the nurse's son Asmar, and both listen to her stories and songs about the Djinn Fairy: a beautiful woman, locked up in a crystal cage, awaiting a prince to free her. Thinking them to be a bad influence on Azur, his father eventually throws the nurse and her son out of the house, cruelly banishing them without food or money.

When Azur reaches adulthood he starts a foolhardy trip to his nurse's country to free the Djinn Fairy. Once there, he crosses paths with an equally determined Asmar who has the same plan. But can either of them finish this prince's quest? They'll have to face robbers, slavers, each other, traps, magical beasts and an impossible conundrum...

You could suggest that the animated movie would be the purest form for an artist to communicate his visions to other people. Few other media give him so many tools to use. He has total control of the movement, sound, images and colors his audience sees, unencumbered by the laws of physics or reality. The possibilities are endless, and only limited by the imagination of the artist.

Therefore it has always puzzled me why the animated films which are meant as mass entertainment look so much alike.

Be it America or Japan, animated features always seem to copy slavishly what some masters have dictated decades ago. On occasion it's spiced up with cgi, but look at the general designs, or the close-up of a face, and you can wonder why there isn't some more variety there. Too often it's "typical anime" or "typical Disney".

This is especially strange when you consider what a vast library of styles and techniques history offers us. Drawings are nothing new after all, people have been illustrating their thoughts for millennia. Apparently it takes a true visionary artist to be able to make a movie look very different from the others and still succeed in entertaining people with its beautiful art.

Someone like Michel Ocelot for example. His "Kirikou and the Sorceress" showed a style which cared more about forms and colors creating beauty, instead of perspective and detail creating reality. For his most recent feature "Azur & Asmar", Mr. Ocelot discovered the computer and decided it was a handy tool. He used it as a means to an end rather than an end in itself, and we as the audience are all the more lucky because of it.
Everything in "Azur & Asmar" happens and looks exactly as Michel Ocelot wants. Some textures are affected by light and shadow, others remain the same. Some things move, most things don't, but it's all by design. It creates a unique look, one that allows Mr. Ocelot to assault you with colors and details in places where you don't expect them. The end result is nothing short of stunning.

As travelers in the Mediterranean and Middle East can testify, Islamic architecture through the ages has created some of the most beautifully detailed and decorated buildings in the world.
The famous illustrator M. C. Escher studied the designs in the walls of the Alhambra in Granada, and these inspired him to create his famous woodcuts of mathematical figures which fill a given space exactly.
Michel Ocelot also uses these architectural marvels to great effect. Granted, he does some cherry-picking but rest assured, most of the buildings in the movie really exist!

But beautiful visuals alone do not a good movie make. Thankfully Michel Ocelot knows this, and all his images are in support of the story he tells us. It's in the format of a fairytale, and as such it allows him to insert coincidences and magical influences without them seeming to be out of place. More cunningly, it also allows him to preach some morals without getting overly belligerent. Normally I hate the moment when a movie suddenly does the "and now the important message, children"-routine, but here it is done with intelligence and integrity. The audience is not being talked down to, rather it can draw its own conclusions.

It helps that all major characters in the movie are shown as multidimensional people whose interactions seem to flow naturally (bar Azur's father, who remains a bigoted enigma). Part of this is because of the great voice-acting, especially by French comedian Patrick Timsit who voices Azur's squire Crapoux. Just imagine, a sidekick who isn't always funny and doesn't get irritating after several repeat viewings!

Michel Ocelot is no fan of intrusive scoring, so don't expect to hear music all the time. What is there though is very nice and was written by Oscar winner Gabriel Yared (of "The English Patient" fame) who didn't mind doing this for a fraction of his usual fee, being a fan of Ocelot's work. It never SOUNDS cheap though, and the finale is balm for the soul.
As is the whole movie, actually...

An incredibly beautiful work of art, "Azur & Asmar" is a marvel for young and old. My four year old son loves it, me and my wife love it, and I showed it to my septuagenarian parents earlier this week, who were equally impressed.

I actually think it's a crying shame this wasn't distributed widely over here in the Netherlands.
We have a large North-African community, and lots of cultural problems with each other. What struck me in this film was that even though stereotypes were used, the movie is still VERY respectful of both cultures and show both sides have lots to be proud of...

You can wake me up for a pretty Korean DVD anytime,and this is no exception. Allegedly a copy of a special French Christmas Edition (which is VERY out of print), it takes the form of a children's book with many reproductions of the movie's beautiful artwork. The discs are housed on the inside covers, front and back. It's just like one of those fairytale books which contains the CD with the spoken version,only this time you get 2 DVDs.

The book itself is in Korean (except for some English titles: Korean DVD booklets for some reason always have a chapter which is called "ABOUT MOVIE" and this one is no exception), but don't let that deter you: the images far outweigh what little text there is.
For more pictures of this set you can check our DVD-forum.

Now for the contents of the discs.

Disc one holds the film.
Amongst the various Dolby 5.1 and stereo tracks is indeed a French 5.1, and it is good. Check.
The visuals are sharp, colorful and generally rock. Check.
There are English subs. Check!

The subs are a bit sloppy and contain some slight errors, but nothing that will make you miss any of the story. In fact, these subs are pretty special and this is why:

The original soundtrack is in French and Arabic. The Arabic wasn't subtitled in France, nor was it meant to be. Arabic is treated as a foreign language in this movie, and that is wholly by design. Michel Ocelot went so far as to explain to all foreign distributors that when a dub was created, the Arabic should NOT be dubbed or subbed but be kept Arabic. He even says so on the documentary on disc 2, but more about that later.

So guess what the Koreans did? They subbed everything!
Now you shouldn't think this ruins the movie. Fact is, you don't need to know what is said in Arabic in this movie as that is more-or-less clear by itself.
So on the one hand these subs do NOT conform to the artist's wishes, but on the other hand I quite liked being able to tell what people were saying. And I wouldn't be surprised if this is the only English-friendly DVD-version which allows you to do so.

The second disc is packed with extras, all of them good!
There are no English subtitles, but the spoken language is French so wipe the dust off that dictionary and pay attention. And there is still lots to see even if you're hopeless at French.

The first documentary is about Michel Ocelot himself and lasts half an hour. It shows many snippets of his older work so non-polyglot viewers can still have fun here.

The second documentary is called "Le Livre des Secrets" and details in 35 minutes the complete creation of "Azur & Asmar". Distinct chapters handle things like voice-acting or cgi. There is no fat whatsoever in this item, and all is interesting.

Next are four original versions of deleted or altered sequences, all of which are worth watching (why did he shorten the lion chase? That stuff is awesome!).

Fourth is a 40 minute interview Michel Ocelot did with writer/director/media professor Alain Bergala, which may be a bit hard to follow for the non-French who can't read Korean subs.

Next are several sing-along, Karaoke and textless versions of the Fairy Djinn song. As you know the lyrics from having seen the movie, this counts as a lesson in both French and Arabic!

Finally there is a selection of trailers for "Azur et Asmar", one of which features Kirikou as a host, telling you about this cool new upcoming movie!


All in all these are fine discs, featuring a good transfer of a brilliant movie, with a nice selection of extras, in a very pretty package.
Highly recommended!

Buy this title from our affiliate.
See pictures of it here in our DVD-forum.
Read the interview GhibliWorld.com did with Michel Ocelot.
Read Todd's review.