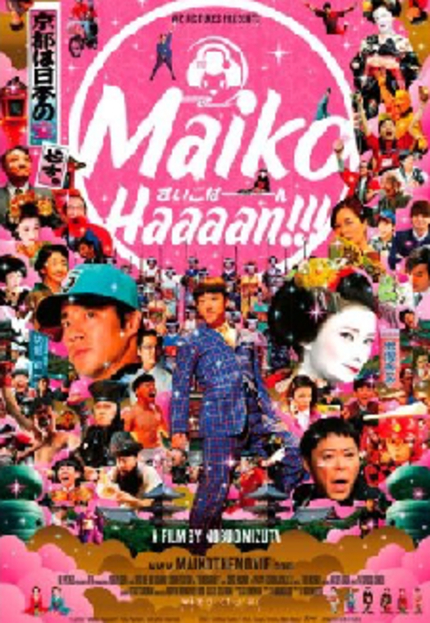 Comedies inevitably lose some of their spark the second time around, so I was curious to see how Maiko Haaaan!!! would play for me when it screened at the Asian Film Festival of Dallas (AFFD) this weekend. I first encountered it at Fantastic Fest last year with zero expectations; I instantly connected with the zany sense of humor and broadly-played characters and had a blast, as did the audience.

Any concerns I had were laid to rest in the first scene. The Dallas audience was ready for a little craziness and responded enthusiastically. The contagious laughter made it easy to enjoy a second time through, and I also picked up on more of the subtle humor that I'd missed the first time.

As I wrote previously, Maiko Haaaan!!! lives up to expectations as a "crazy Japanese comedy," but it actually has much more to offer.

Onizuka (Sadao Abe) works at a giant noodle company in Tokyo. He has idealized and worshiped geishas ever since he first encountered them in person as a teenager on a school trip to Kyoto. He runs a web site devoted to geishas and happily posts photographs of them on his web site. One day he is drawn into a flame war with a mocking commenter. Soon thereafter he is transferred by his company to Kyoto. He thinks it's a dream come true, though in truth it's a demotion —- the Kyoto branch only makes the toppings, not the all-important noodles themselves.

Onizuka quickly dumps his adoring girlfriend (Kou Shibasaki) and, upon arriving in Kyoto, promptly tries to enter a geisha house to partake of its pleasures. He is rebuffed because geisha houses do not allow any "first timers." Customers must be recommended and sponsored by a known customer; it's all a matter of trust, you see. His company's CEO agrees to sponsor Onizuka, but only if he comes up with an idea that makes the company a lot of money. Onizuka has built up such an idealized image of geishas that he is motivated to do so. Eventually he gains entrance to a geisha house, where he encounters his web site flamer, who turns out to be a famous baseball player (Shinichi Tsutsumi), which only inflames Onizuka's competitive spirit.

The great success of the film is the idea that a total geek can transform himself into someone mighty with the right motivation. It's taken to ridiculous, and extremely funny, extremes by director Nobuo Mizuta and screenwriter Kankuro Kudo (Ping Pong, Yaji and Kita: The Midnight Pilgrims). The narrative also veers off on unexpected, diverting tangents -— a musical number, a geisha training montage -— and entwines a rather sweet, naive romance.

Maiko Haaaan!!! keeps the laughter coming throughout all of Onizuka's crazy, shameless antics. Viz Pictures recently released the film on Region 1 DVD, which can be ordered at Amazon through our affiliate link.