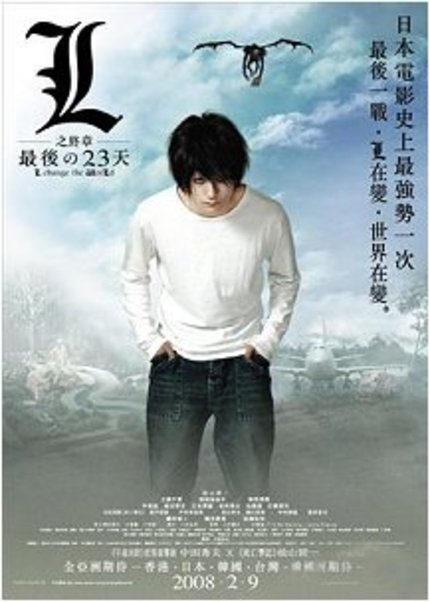 Hideo Nakata's L: Change the World has had a healthy life on the festival circuit, and has recently been released on Region 3 DVD. L is a sequel to the popular Death Note series, which explains why the film might be a popular programming choice. On an overall level, however, it is somewhat difficult to see the appeal of L: Change the World to anyone beyond young people, and hardcore fans of the original films and the manga upon which it is based.

L, a young detective with a superhuman intellect, writes his name in the Death Note book. Before his time on Earth expires, he is called upon to save the world from a deadly virus. In doing so, he assists two children: a math whiz, whose village was wiped out by a man-made virus, and a girl, whose father was killed by eco-terrorists. As suggested by the plot, the antagonists and protagonists in this film are all broadly drawn, and include benevolent father figures, innocent kids, a scar faced bad guy and a stern evil female scientist. L, who is played by Ken'ichi Matsuyama, is a young ball of quirks whose superior logic skills are only surpassed by his introverted affectation and junk food fetish. These traits are completely true to the character, but in this film, the character's idiosyncrasies seem more distracting then anything else.

L: Change the World's mix of a standard eco-thriller plot with broad characters and an extraordinary introvert seems geared towards a younger audience. Both the film's violence and the Lenny Kravitz song that runs over the end credits, however, suggests the intended audience was a bit broader. Regardless, L: Change the World has its advocates but one wonders whether this enthusiasm arises from the film itself, as opposed to its relationship to the broader Death Note phenomenon.

More about L: Change the World