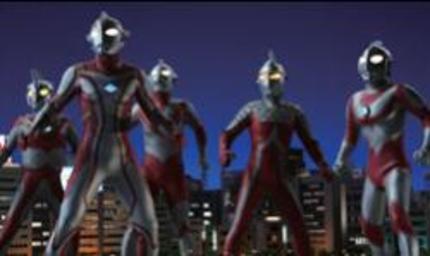 Now, I'm not going to lie to you and pretend like I'm all up on my Japanese masked heroes because I'm not. I've never watched Kamen Rider or any of the hordes of lesser known figures in the hero world but I do know this: Ultraman rocks. The original Ultraman started the whole craze and, in my opinion, has never been topped. They're fun, they're action packed and they deliver a new kaiju villain with every episode. What more could you want, really? I started the boy on these a couple years back and he eats them up like mad now and I couldn't be a prouder father. Sniff.

Anyway, most of things I do know about Japanese heroes revolve around Ultraman. For example: there has been more than one Ultraman. There have been eight, each of them with slightly different suits and abilities, each of them a different human character bestowed supernatural power to save the earth from crisis by benificent otherworldly powers. Ultraman was revived on the big screen a few years back to great success so it's really no surprise that they're doing it again, with a new Ultraman feature film coming in 2008. What was surprising, however, is that the new film features all eight Ultramen, on screen together for the first time. The trailer for the film is now available and, man, this looks like a blast. It's also proving remarkably difficult to capture and share here - if someone could load it into the ScreenAnarchy Player I'd be grateful - but hit the link below to check it out.