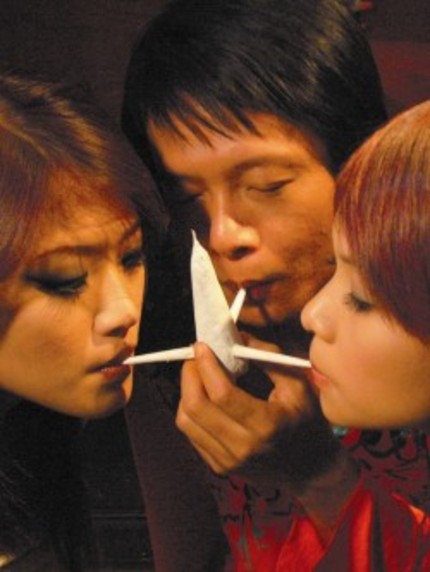 Actor / writer / director Lee Kang-Sheng must have mixed feelings about Rotterdam. His first movie "The Missing" won a Tiger Award in 2004, but when he went to the Cinemart part of the festival to try and get funding for his next movie, he didn't get any!

And now that he's finally finished his next film (with a Taiwanese government grant), "Help Me, Eros" is being hailed at this year's festival as "a striking film by a striking moviemaker".
Oh well, art is art and business is business and apparently it's never sure the twain shall meet, not even at the International Film Festival Rotterdam.

Although I could see this as not being the easiest of sales. "Help me, Eros" is a somber movie telling the last part of a stock-trader's downfall. It focuses on the man's desperate clinging to the few luxuries he has left while he drags himself through every day on a diet of sex, soft-drugs and fantasies about the girl at the other end of the suicide-helpline.

It's also partially autobiographical, describing an episode of Lee Kang-Sheng's life of which he has no fond memories but found plenty of demons to exorcise.
Read on after the break...

Ah Jie (played by Lee Kang-Sheng) is, correction, WAS a successful stock-tradesman who has recently lost everything in a bad exchange. His assets have been frozen, his car and apartment have been impounded. Not that he stops using them, he just breaks the seals day after day. What little he has left he sells to the pawnshop and the money is mainly spent on taking care of his greenhouse, where he produces his own high-grade marijuana. In desperation he calls a suicide helpline and grows attached to the kind voice on the line. He starts to stalk the girl he mistakenly thinks he's spoken with, and also gets into a relation of sorts with a betelnut salesgirl. But it all amounts to nothing. Ah Jie seems to be in a dead-end-street and even the best sex in the world is not going to change that...

In one of the first shots of "Help Me: Eros" you see Ah Jie watching a cooking-show on his television. Onscreen a fish is quickly gutted, sliced, partly fried and served on a plate while it's alive, the head still gasping for air. The cooks stand around joking about it, wondering what the fish is thinking. "Help me!", one cook suggests. And that is basically Ah Jie's story, with him being the fish. He has been burnt financially, his insides torn out, the rug pulled out from under his rich yuppie lifestyle and all he can do is gasp a few last useless breaths before disappearing. The allegory is not subtle but very accurate and there is a lot of that sort of thing to be found in "Help Me Eros".

Like his mentor Tsai Ming-Liang (acting as executive producer and art designer here), Lee Kang-Sheng uses many long static shots to show his story. While Lee's compositions are maybe not quite as masterful as Tsai's, Lee's seem more daring and the result is very pleasing to the eye. The movie looks insanely good on occasion.

Stellar acting seems to be a given in movies by these two. Lee Kang-Sheng put himself in the lead as a cost-cutting measure but given his intimacy with the story I think it was a good decision. Yin Shin plays Shin the betelnut girl, and she is VERY good in a difficult role, obviously not just there for the eye-candy. And Jane Liao is brilliant as the girl on the suicide helpline who tells other people all day to take control of their lives, while she herself suffers from a major eating disorder.

There are some things which harm the movie though. First and foremost is the difficulty to identify with Ah Jie once he becomes a bit of an asshole, halfway through the movie. You can sort-of follow his reasoning up to a point, but once he becomes abusive Lee Kang-Sheng loses me. The same goes for several other characters: while Lee Kang-Sheng is good at showing why people suffer he cannot quite explain the people who do the abusing.

Second is going to be the depiction of sex, which might turn a lot of people away. The first really sexy scene is a weed-induced fantasy sequence which is wild but fairly tasteful, not featuring full nudity but DAMN it doesn't need to.
However once Ah Jie gets involved with the betelnut girls some scenes seem to come straight from the pages of the Kamasutra, the advanced sections even. I fail to believe some of these positions can actually be fun in real-life but within the movie it gives these scenes a fantastical sheen, especially when the participants have famous brand logos projected on them. This is definitely "sex: the fairytale" and not "sex: the reality"! Because of this, the film has already caught some flak for being "exploitative".

It does make a point though as it underscores the excesses Ah Jie craves in everything, be it a stereo or a bigger joint, and his incapability in cherishing anything because it needs to be "topped" as quickly as possible. It also shows the failing mechanisms some people invent to shield them from harsh reality.

By the way, a note: if betelnut salesgirls really look like that in Taiwan, the tourist agencies may want to draw more attention to that in the future. Based on the synopsis I expected these to be shop assistants, but instead these girls look and act like striptease artists, wearing next to nothing, their counters translucent and on a pedestal so the customer is sure to get a good look. They also slide down a pole to bring you your order and even then they are ready to give you "something extra", provided the tipping is good.

Lee Kang-Sheng was planning from the start to put a lot of nudity and explicit (soft)sex in the movie, but the only actresses he found willing to bare themselves were either models or into adult entertainment. This resulted in the women being nothing short of gorgeous, which helps in making the nudity even more excessive.

Like a Tsai Ming-Liang film this is a slow, deliberate character study with a message.

UN-like a Tsai Ming-Liang film this one is quite flashy. It's still a heavy meal rather than a light snack though!
Definitely recommended.

Our interview with director Lee Kang-Sheng.