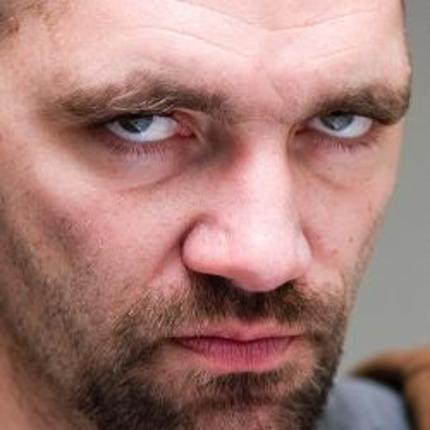 Over here in the Netherlands we have one abbreviation which has an even nastier reputation than HIV.
It's TBS, which means "TerBeschikkingStelling". And it's a sentence you can only get after committing a serious crime.

It is also the title of Pieter Kuijpers' new Dutch thriller, in which a young girl gets kidnapped to be used as a hostage by the worst kind of criminal you can imagine: a mentally disturbed violent thug who has been imprisoned for the past 14 years but just escaped.

Often I won't touch Dutch movies with a 10 foot pole. That's because the difference between "normal talking Dutch" and "(over)acting Dutch" is most of the time too hard for me to swallow. Hearing Dutch actors "orating" pulls me out of the story. But "TBS" totally avoids this pitfall. It is a tense, scary and on occasion even funny thriller, no mean feat considering the dreadful subject. I did not get pulled out of the movie, in fact upon nearing the end the tension got strong enough for me to sit there with white knuckles and a growing leaden ball in my stomach...

While watching a Dutch movie? What the hell? Read on...

Cultural Background (or: What is TBS?):

Yes, I'll start this review with a lesson. The reason for this is that I really have to explain the title, which has a special meaning not known to most non-Dutch people.

The international title of of this film is going to be "Nothing to Lose", which sounds hopelessly generic, in fact if I heard of a hostage drama with that title I'd automatically expect Steven Seagal to show up and rescue the hostage!
The original Dutch title is "TBS" though, and it carries a burden, a terrible expectation. Mention TBS in the presence of a Dutchman, and he'll sober up.

The reason is that TBS is the worst penalty you can get under Dutch law. We don't have a death penalty, we don't have "imprisonment for life" (we have it on paper but when sentenced it automatically changes to "30 years in prison"), but we do have TBS.

So what is it?
Dutch law assumes that even when a perpetrator is pronounced mentally ill or insane, he/she should still have known that things like murder and rape are bad. So they do not get a "get-out-of-jail-free" card to the mental ward but a proper prison sentence first.

On top of that they are forced to participate in a forced regime in a TBS-clinic which will be trying to "cure" them, or at least make it able for such a person to function more-or-less normal in society.

And here is the kicker: the prison sentence will always end at a certain point, but the TBS only ends when a commission of police and doctors says you're cured. And if you're a total loony, that means life imprisonment.

It's a functoning system, so why the bad reputation?
Because in the last couple of years there have been several well-documented breakouts and escapes from TBS-clinics, often with disastrous results. In the summer of 2006 all of the Netherlands held its collective breath when a TBS-convict escaped the clinic, stole a car, kidnapped a young girl and disappeared. They were found 3 days later, with the girl still alive but sexually assaulted.
A few months later, another TBS-convict escaped, killed some random stranger and returned to the clinic. We've had several other mishaps recently.

Every time such an incident occurs the public outrage is huge, and heated discussions are raised in the media and in politics about TBS, its successes and failures. Should we as a society even try to cure these people, instead of just locking them up and throwing away the key? Why take the risk?

It's an interesting subject, without any easy answers. But you can imagine what the reaction was when it became known that a film (a THRILLER even) was in the making called "TBS", featuring the kidnapping of a young girl by an escaped TBS-convict...

Johan has been in custody for 14 years after he killed his father and, allegedly, his sister. Eight of those years were in regular prison, the last six in a TBS-clinic. Johan refuses to acknowledge any responsibility for the death of his sister, who he claims was killed by his father, a story he says his mother can corroborate. But his mother has always refused to do that, and according to law she can't be forced to testify.

When Johan hears he is about to be moved to the "long-term" ward, basically a place where no-one has ever been released from, he snaps and violently escapes. Grabbing a random girl to use as a human shield he starts a desperate search for his mother, the only person in the world who can still safe him from life imprisonment.

It's a long trip though, ample time for a weird sort of relation to develop between Johan and Tessa, his 13-year-old victim...

"TBS" was made on a shoestring budget but I challenge anyone to notice it. It looks finished, glossy and I cannot imagine any improvements with a bigger budget. Cinematography and score are excellent. Best yet, the script is a good one: it keeps the audience on its toes yet never fails to introduce surprises and turns. The central question is of course if Johan will harm the girl. Secondary, what the hell happened 14 years ago? These are linked and director Pieter Kuijpers ("Van God Los" aka Godforsaken) deftly keeps you guessing. When the film turns into road-movie territory it could so easily have become boring, but the opposite happens: "TBS" starts picking up momentum and speed.

And I have to praise the director: he doesn't cheat.
From the start he makes it obvious that Johan is a severely disturbed person, whether he killed his sister or not. While it would be easy to have the audience sympathize with someone who would be in a TBS-clinic for a crime he didn't commit, the violent way Johan escapes makes you wonder from the start. You just don't know what to make of him, but every snippet of information that gets revealed seems more damning.

In contrast, Johan treats his hostage in the best way possible given the circumstances, being friendly, trying to calm her, shielding her whenever possible, never punishing her when she tries to escape. And obviously Johan is desperate for her to believe him, which sort-of turns him into a giant puppy dog at times.

When the end of the film comes, you don't expect to get surprised. I mean what can happen? There are only four possibilities:

Similar endings for all 4 possibilities have been seen so often on television in series, films, real life, you name it, that none would be original. Thankfully Pieter Kuijpers knows that, and does a tremendous job of milking tension out of keeping you guessing. When finally the choice becomes apparent, you start noticing...

Well, as I said, he doesn't cheat.

All this would fall flat on its face if not for some damn fine acting from the two leads, Theo Maassen and (actual 13-year-old) Lisa Smit. The dialogues sound believable, so my pet peeve has been negated, and it seems like the two have some wicked fun with their roles.

A note on Theo Maassen: he is one of our more cuddly comedians, and Pieter Kuijpers got the idea of casting him as Johan when he saw Eric Bana (a stand-up comedian at the time) at work in "Chopper". It's a choice which pays off, with Maassen getting to show his comic timing to great effect while using his giant neanderthal physique (he's well over 6 feet tall) in a most intimidating way.
Not that I was surprised to see him play a madman, to be honest. Ever since he stole the 20.000 Euro UEFA trophy from soccer-club PSV and returned it six months later, live on television with tears in his eyes ("I'm so sorreeheeheehee!!!"), I have always thought he was certifiable.
But I never suspected him to be capable of the kind of acting he portrays here. To be that potentionally evil, violent and vulnerable at the same time is a tour-de-force, so hats off to him.

And hats off to Lisa Smit as well for giving proper counterweight.

This was basically the non-avoidable world premiere at this IFFR, it being local product and all, but it's surprisingly very good. It easily negates all my misgivings about Dutch acting and coming from me that's saying something. It's just a very good movie and one of the most tense and believable thrillers I've seen in a long time, one which can easily take on international competition.

This just in: "TBS" just got its first audience rating, a whopping 4.33 out of 5. I've discussed these ratings before, and this is really very high, meaning "TBS" will end up in the top ten of the festival...

The "TBS" page on the IFFR-website.
The IFFR 2008 audience ratings.