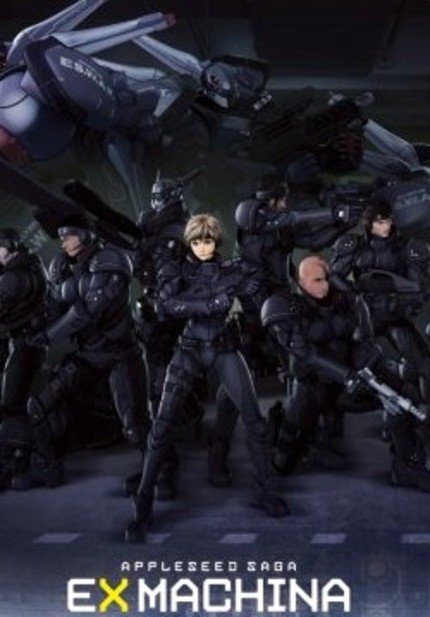 My first real press screening EVER turned out to be one I was really hoping for earlier this year. Yes, last autumn it became known that the International Film Festival Rotterdam 2008 had secured "Appleseed: Ex Machina" and I was very happy about that. A good sign for anime-lovers this year, perhaps?

I'm still happy with "Appleseed: Ex Machina", but to be honest I'm disappointed about the total lack of (other) anime in this year's festival. Apparently we'll get some titles at the Amsterdam Fantastic Film Festival but come on! Rotterdam used to be THE place to see these! Some people don't even consider the new Appleseed movies to be anime because they are completely computer-generated like the "Final Fantasy" movies (and Pixar movies for that matter).

Anyway. Writing a general review for this particular movie is difficult because the audience is already divided. It's a sequel, so you have the newcomers and the fans, but there is also the split between knowing the source materials by Shirow Masamune or not, and having seen the hand-drawn 1988 movie version or not.

Because of these 'splits' I first need to tell where I stand in these matters.
I haven't read the books by Shirow nor have I seen the previous version. I have seen the first CGI "Appleseed" and really liked it for what it was: beautiful eye-candy. I loved the technical designs, could stomach the character designs and got kicked around by the sound design. And the smooth framerate was easy on the eyes when compared to the 10 fps often used in handdrawn anime.

So what do I make of "Ex Machina"? Again I really liked it, just as the first one, but for different reasons. It's a case of two steps forward, two steps back.

It's 2133. Patches of the world are slowly rebuilding themselves after the world war has ended, and the city-state of Olympus is still busy repairing the damage of last film's cataclysmic finale. It doesn't help that Olympus also suffers from unexplainable new terrorist attacks.

Super-soldier Deunan Knute is still in the anti-terrorist force, together with her cyborg lover Briareos. As he is the only person who succesfully managed to bond the remains of his human body with a robot shell, the Olympus government starts using his DNA to create new 'bioroid' soldiers with that same ability.

But interpersonal tension or not this team of human, cyborg and bioroid must find a solution to a new threat called HALCON, which might take over Olympus and maybe even the whole world...

A few years have past since the last Appleseed movie, so with more powerful technology available you'd expect greatly improved visuals. Both movies have been very ambitious in what they tried to achieve and both have successes and failures. Thing is, the first movie already looked pretty good and the only thing which stands out animationwise in "Ex Machina" is the level of detail, grit, dirt, and facial expressions. Deunan and her friends look more human than the last movie but only slightly. On the one hand that's a wise decision because you wouldn't want the sequel to look TOO different, but on the other hand it still means a level of abstraction is present that is sometimes a hindrance.

Small, subtle gestures are done excellently. Especially the virtually faceless Briareos shines in this film. This character has his emotions portrayed just by using body language and voice acting and the end effect is nothing short of awesome.
The others have faces though, and at the start of the production people obviously felt confident the technology would allow them to portray big emotions. "Ex Machina" is full of close-ups and zoom-ins but to be honest we're not quite there yet. Like "Beowulf" last year this results in some scenes being impressive, some scenes being too deadpan and some scenes being shamelessly overacted.

It doesn't help that the script sometimes dives into silly theatrics. Example: during a burial ceremony it rains cats and dogs, yet there is not a drop of rain in the entire rest of the movie. Is producer John Woo maybe to blame for this? This stuff sometimes works in his movies, making them more cartoonish. This, however, is already a cartoon from the start, so now this is just an annoying, tired and childish cliché. And it's not the only one.

There is also a "mystery" in the movie which is painfully easy to solve. I don't even count this as a spoiler, if you hear the following things within 5 minutes of each other you're a moron if you can't figure it out:

- An I-pod like media-device is the new rage, everyone uses it, yet the first thing you hear about it is that "the inventor is unknown!".
- There is a brainwashing virus about which is transmittable as a signal.
- People start acting odd without any explanation. Each of them is wearing this media-device.

GOSH, DO YOU THINK THERE MIGHT BE A CONNECTION???

Yet this is played out as a mystery! Aargh... Is this a translation thing? Is the original Japanese text a clever double-entendre, fooling people while the blunt English subs are spoiling it? Somehow I doubt it.
Thankfully the moment Deunan (who else?) and the-good-genius-guy figure this out, like, 30 minutes after the audience does, the movie starts making sense again.

As I'm now telling the "bad", I'll finish up the parts I don't like. The action scenes are eye-popping, but they're very derivative. I can understand in this case it's fun ripping off whatever was original about the Matrix films (poetic justice, or "Quid Pro Quo" I'd say) but when an army of hundreds of evil flying droids need to be fought, and they arrange themselves in tentacle-like formations, there is a terrible sense of deja-vu...

Now, the fun part. What works in this movie.

The interaction between the three lead characters is stellar. There are many science fiction stories featuring a person who meets his 'copy', but few movies deal with the concept in such a mature way as "Ex Machina" does. Deunan, Briareos and Tereus obviously resent the situation, but they also see the necessity and deal with it as sensible adults. Not a single childish tantrum amongst these three, just some unfriendly 'prodding' now and then.

And Deunan and Briareos are now quite the couple, when compared to their relationship in the first "Appleseed". At the start someone comments on the fact that Briareos wears an anologue watch and asks Deunan what she thinks about it. She responds by holding her wrist next to Briareos's, showing they have a matching set of watches. It's a surprisingly touching scene, conveying more emotion in two seconds than the previous film had in its entirety!
"Ex Machina" is full of subtle, clever moments like these, and it's unfortunate they clash with the less subtle ones.

And, I have to say it, it looks and sounds smashing. Barring the few overacting-slips mentioned far above this is just one big feast for the eyes and ears. The designs on display should satisfy any scifi-fetishist.

The story has gotten some flak, but it actually isn't that bad and covers many interesting concepts. It's just that (as described above) the execution is sometimes too clunky and heavy-handed. And the big endfight takes about 40 whopping minutes, during which the story slows to a halt of course. I had the same issues with "Steamboy": I like me some spectacle and explosions but, man, not for 40 minutes straight! Thankfully the "end boss" is an awesome creation, worth the wait.

If you liked the first film I'd be really surprised if you didn't like this one. While it rectifies a couple of errors from the previous film (mainly the relationship between Deunan and Briareos) it unfortunately introduces some new ones. But I'm DEFINITELY looking out for the next film. It was supposed to be a trilogy, right?

And if you didn't like the first film, chances are the only fun you'll get out of "Ex Machina" is hearing an army of Japanese voice-actors try to pronounce the name "Briareos"!

Crap! This was a cinema screening, I DON'T HAVE THE DVD YET!
Rest assured I'll review that as soon as I get my grubby paws on one.

Note: most of the images in this article are copyrighted.

We were kindly allowed to use these for the purposes of this article.

Our (Peter from GhibliWorld.com and me) interview with Aramaki Shinji.
The "Appleseed: Ex Machina" page on the IFFR 2008 website.