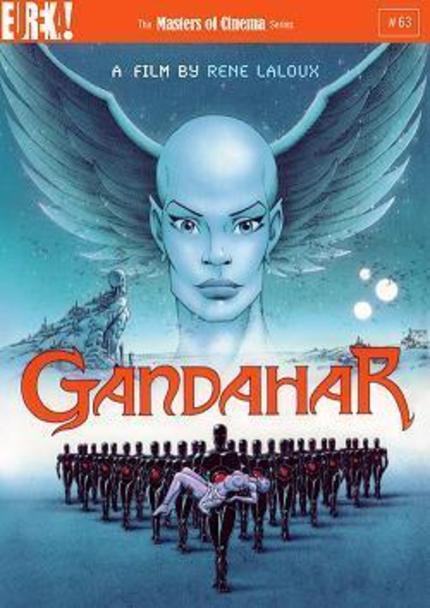 Eureka recently released all of the films of René Laloux on DVD as part of their "Masters of Cinema" series, and in the previous weeks I've reviewed "La Planète Sauvage" (aka Fantastic Planet) and "Les Maîtres du Temps".

NORTH Korea, that is!
A lavishly exotic adult-oriented movie which in no uncertain terms condemns totalitarianism, this is surprising to say the least...

According to René Laloux himself this was his best feature film. It combines the adventure fun of "Les Maîtres du Temps" with the heavy (but never irritating) preaching about human nature as seen in "La Planète Sauvage", and artwise it's also in between those two.
The animation is smooth, very pleasing to the eye, and thankfully a lot more consistent than in Laloux' previous effort.

The idea for creating "Gandahar" came immediately after the huge success of "La Planète Sauvage". René Laloux got into contact with several artists from "Heavy Metal" magazine like Jean Giraud (Moebius) and Philippe Caza, and discussed many possible projects with them, most of which unfortunately never became reality. One of the ideas Laloux discussed with Caza was a feature film based on Jean-Pierre Andravon's novel "Les Hommes-machines contre Gandahar" (which translates as "The Machine-men vs. Gandahar"). Caza agreed, designs were created but the project got abandoned because Laloux' resources were needed elsewhere.

It never completely died though: all the way through the production of "Les Maîtres du Temps" Caza and Laloux were trying to get "Gandahar" off the ground. For years these efforts were fruitless, but suddenly there was a breakthrough when they got a lucrative offer from a most unexpected direction: an animation studio in North Korea was willing and able to put 150 people to work on a Laloux film, for basically peanuts. René Laloux accepted and the production moved to Pyongyang, making Laloux possibly the only Western director to have each of his features shot in a different communist country!

As always this new team proved a blessing and a curse: Philippe Caza had some revolutionary techniques in mind for visualizing the world of Gandahar, but most had to be dropped in favor of more conventional methods. The North Koreans turned out to be very talented but completely unaware of different art-styles. If Caza wanted something to look "Chinese" for example, the French team members had to bring Chinese art with them to show the Koreans what they meant, as the Pyongyang team had never even seen such pictures.

Despite these difficulties the movie got finished, on time, reasonably within budget and with a consistent new style, a major victory for the French-Korean team.
Gandahar got released in France in 1988 and became a big local success. Unfortunately this was the start of a very troubled international release which nearly doomed the movie to oblivion.

Harvey decided that, while he liked what he saw, American audiences certainly wouldn't. He cut some of the nudity, re-edited parts, replaced the entire score and changed some of the names. Isaac Asimov (yes, THAT Isaac Asimov) agreed to do some of the translations for the English dub and of course "Gandahar" also got the new title "Light Years", sometimes even "Isaac Asimov's Light Years". Having done all this hard work Harvey saw fit to give himself a directing credit, billing himself next to René Laloux.

For honesty's sake I'll mention that René Laloux has always said he had no objection to these alterations. The new version didn't exactly turn into a marketing success though: it's very strange that I, as an avid science fiction fan in the Eighties, never even knew this movie existed in either its "Gandahar" or "Light Years" shape.

Somewhere in the future, on a distant planet, Gandahar is a country of peaceful bliss. But suddenly it gets attacked by a mysterious enemy: an army of black metal warriors who turn everyone they encounter into stone, village by village.
Caught off guard, Gandahar's government sends the young agent Sylvain on a dangerous mission to investigate this enemy. He succeeds, but also discovers a few ugly secrets and by-products concerning the idyllic life Gandahar's people have been living.

His travels lead him past many horrifically deformed creatures, culminating into a giant god-like brain which may or may not be linked to the black metal army...

Starting with the animation: this is a giant leap forwards when compared to "Les Maîtres du Temps". The whole movie looks as if it takes place in the same world, and the style differences that are still in the movie have been put there on purpose. An unusual technique was used to lessen the contrast between foreground characters and background art: edges were touched up with wax crayons to make them blend better. It's not as slick as the CGI we get bombarded with these days but it is still effective. The end result is pleasing to the eye and the animation is remarkably smooth, especially in some of the more exotically deformed humanoids in the film. No matter how extreme these people might look, each has a way of movements which seems tailor-fit for them. Very impressive.
And as always René Laloux takes time to show the flora and fauna of this world in explicit detail, and manages on occasion to give me the feeling I'm watching a documentary. Meant as a compliment, by the way!

Laloux can be quite a clunky storyteller but at least he always bases his scripts on interesting stories, and this one might be the best example. While there are certainly faults in the way the story flows, it keeps interesting to follow and by the end I actually felt worried for all characters involved, definitely a good sign.

A note on nudity: just like in "La Planète Sauvage" a civilization is shown which has little use for clothing. This results in all women running around topless.
And Caza obviously likes breasts.
A lot.
It's one thing when he designs a tropical fishing village where the people are all more or less nude, but even the Government consists of gorgeous women who, when dressed in uniforms, are proudly flaunting their double-D's in the open air. And while the deformed men are truly deformed, the deformed women just seem to have two extra breasts, or four, or six, or eight...
Now I'm not too troubled by that, but if you are easily shocked you might have a problem with this film. Parts might even raise an eyebrow (or two).
Also, you might find the shape of the god-brain-creature strangely... discomforting...

Once again René Laloux provides nearly eighty minutes of excellent eye-candy, and this time it supports an interesting story. While his efforts never seem to be as accomplished as, say, Hayao Miyazaki's, he is more like Mamuro Oshii: preaching to his own choir, concentrating on the things he himself does best.
It makes "Gandahar" a very enjoyable film to watch. Maybe not as classic or creepy as "La Planète Sauvage" but it can safely be called a companion piece to that movie.

Considering the controversy surrounding the infamous "Light Years" edit, it's a shame Eureka didn't include it as it would have allowed us a glimpse into the mind of Harvey Weinstein, and at least some added writings of Isaac Asimov. Maybe Harvey didn't allow the inclusion?

Video is quite good although some of the strong colors (especially pink) seem to bleed more than they should. The print used has some damage but looks pretty decent. And this time there is no "combing", which I'm glad of as that annoys me more with animation than with regular movies. The sound is also good, if a bit wavy at times. Subtitles are excellent as usual with Eureka.

As for the extras, there is just one on the disc: a short movie called "La Prisonniére" (The Prisoner) which René Laloux made with Philippe Caza. It's about two orphans hiding from war in a city dedicated to silence. The city also holds a female prisoner who has a plan to escape, and wouldn't you know it that plan includes... an army of nude big-breasted women.

It's a nice addition to this disc, but it's a shame there is no explanation about what it is, why it was made etcetera. At least the shorts on "La Planète Sauvage" had slides in front of them explaining the history of the piece. Such a slide is sorely missed here, as there is also no information about "La Prisonniére" in the accompanying booklet.

A weird oversight. Ah well, there is always Wikipedia and Google I guess!

Speaking of the booklet, it is once again of the high quality I expect from the "Eureka: Masters of Cinema" series. Like the booklets with the other René Laloux DVDs this one starts with an essay by Craig Keller, who loses himself this time in Harvey Weinstein's brain and the rampant symbolism found in this film. More information about the actual production process and the workings of a joined French-Korean team can be gotten from the interview with Philippe Caza, who is a wellspring of anecdotes. The story about the failure to smuggle nudie mags past Russian Customs is especially funny.

Concluding: even with some strange omissions "Gandahar" is still a decent disc of a good and interesting movie.
I very much like Eureka for adding René Laloux to their list of Masters. A shame he only got to make three feature films in twenty years!

Buy "Gandahar" from our affiliate in the UK.
My "Fantastic Planet" review.
My "Les Maîtres du Temps" review.