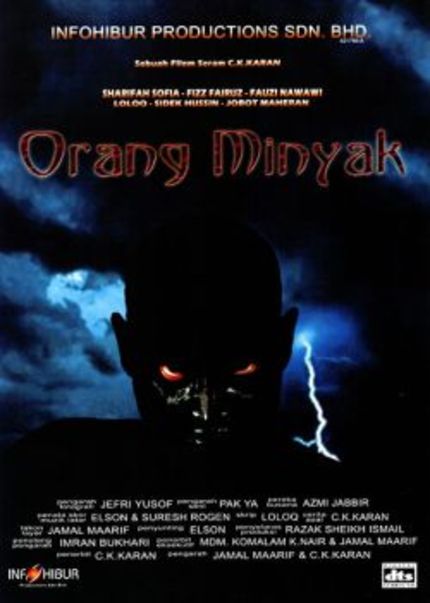 The "orang minyak," or oily man, a character of Malay myth, was first introduced to Malaysian cinemas back in the 50s and 60s. The series of successful films came on the wave of horror films that permeated the film industry then, including the famous Pontianak (female vampire) films that starred silver screen vixen Maria Menado.

After his star faded, for decades, looks like the orang minyak is set to return in a new self-titled film. And from the looks of the trailer that has just appeared online, his uncontrollable libido seems intact too! This could be a great exploitation flick, but I seriously doubt the censors would allow anything more than what we see in the trailer.

This story is based in fiction and myth made by a professor who was doing a research on Orang Minyak in Kampung Silang. Pak Junid placed Dian at his house in Kampung Silang and entertained her as well with the marriage of Ina. Orang Minyak appeared during the ceremony and all hell broke loose. Pak Junid and Munir who have cornered him placed him in a bottle and thrown away after in a river. Unfortunately the bottle was stuck to a nearby branch and was brought ashore by two fisherman. The bottle was then thrown aside. The bottle eventually broke and Orang Minyak came to existence again. The terror he brought to the village itself was unstoppable. Will Orang Minyak ever be able to fulfill his true conquest? Or will the village people stop him in time before he strikes again?