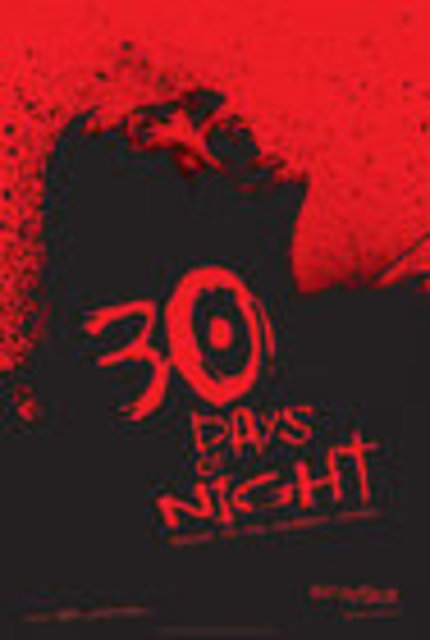 Similar to the trembling refuges of Barrow, Alaska as portrayed in the film, horror fans have been long waiting in a state of uncertainty about “30 Days of Night”. Rarely has an anticipated genre film such as this had as many apparent plusses as obvious red flags. On the plus side, the source material is a highly acclaimed comic book series from horror icon, writer Steve Niles. On the negative side, the star is Josh Hartnett, who has never improved any project he’s been associated with. Likewise, promising newcomer David Slade, of “Hard Candy” fame, directed the film but Sam Raimi’s production company, Ghost House Pictures, which has yet to prove itself in any meaningful way to horror fans, (which, granted, is still relatively new,) put the film together. Well, those fans can breath a sigh of relief, as “30 Days of Night” is one of the most solid cinematic bloodbaths in quite some time.

Another major check on the plus side of the film is its novel concept, kind of an “Insomnia” in reverse, with vampires. The story takes place in the perpetually frozen town of Barrow, Alaska, a completely secluded slow-capped town that annually must endure a month of solid darkness. Upon the eve of this extended sundown, most of the town’s families take the last plane out, leaving behind only 158 individuals to keep the place alive. But come sundown, the horde of vamps who descend upon Barrow have opposite plans for its citizens. Dressed in bloodied suits of black and white, these vampires are all business as they prowl the dark town like drearily determined Black Friday shoppers, their insatiable feeding frenzy fueled by their determination and sense of entitlement.

The local sheriff, played by Hartnett, and his small, well-bundled band of family members and co-workers are all that stand to pathetically oppose the invaders. The unfortunate reality of this situation is that the humans do not stand a chance against the vamps, so logically, they spend most of the time hiding in silence. It is this element that sets this film apart from most every other vampire film, in that it is essentially a survival tale. As far as the horror genre is concerned, this film has more in common with zombie films such as “Dawn of the Dead” than your garden variety “Dracula” adaptation. Lots of gore, plenty of blood, and purely apocalyptic. Only, unlike the zombies of Romero, these antagonists are completely unsympathetic characters in their evil deeds, emphasized by the film’s first half hour, in which preparatory evidence of this premeditated attack (all communication and means of escape are cut off) baffles the locals in this typically quiet town.

In terms of vampiric cannon, “30 Days of Night” has its cake and eats it too. Without explanation, certain traditional rules apply while others are disregarded. Most obvious is the vampires’ fatal aversion to sunlight, which is what brings them to Barrow in the first place. But this sunlight weakness is directly related to the traditional vampiric aversion to the Christian iconography of the cross, which the film never acknowledges. Granted, Barrow is presented as a godless world of perpetual hopelessness, an idea further verified by the ghoulish lead vamp that at one point chillingly informs a panicking victim that there is no God. Perhaps that is enough to explain the film’s worldview to the audience, but it does not explain why the core characters, which do in fact come to refer to these creatures as vampires, with an understanding that they simply must wait out the thirty days until sunrise, never try pulling crosses or holy water on these guys. If “30 Days of Night” has a glaring weakness, this is it.

This is not to say that the film is ineffective – far from it. Director David Slade has crafted a unique horror film that will no doubt stand the test of time. The way his vampires prowl the rooftops in the backgrounds, often just out of focus, and sometimes opting not to strike, affirms his painstaking attention to visual detail. Slade’s ability to torture an audience in the best possible ways (as evidenced in “Hard Candy”) is put to great use, even in the face of some very blatant set-up and payoff sequences that would render a lesser film utterly predictable. Despite the noted presence of Hartnett as the leading man, the casting is 100% solid. This solidity is not immediately evident, as Hartnett is saddled with a few oddball stand-alone lines of dialogue, but soon he settles into a John Wayne-esque persona of a lone man with a code. He is surrounded by other broken and suffering individuals, an aspect of their lives made all the more pronounced by the sudden onslaught of horror that breaks Barrow’s sleepy spell. Even the subplot of a romantic relationship on the mend is not as trite as it seems.

“30 Days of Night” is a solid whole accentuated with visceral scenes of hardcore action and some absolutely terrifying moments. Thirty days may not be a long time under ordinary circumstances, but in this film, the characters and the audience alike feel the eternity it takes for the sun to rise. The only difference is that the audience ultimately is engrossed by the darkness and subsequent terror it brings. Here’s hoping that Slade and Raimi’s company are game to adapt the many sequel comic books that Niles and company have released over the years, maintaining and even transcending this level of quality craftsmanship.

More about 30 Days of Night