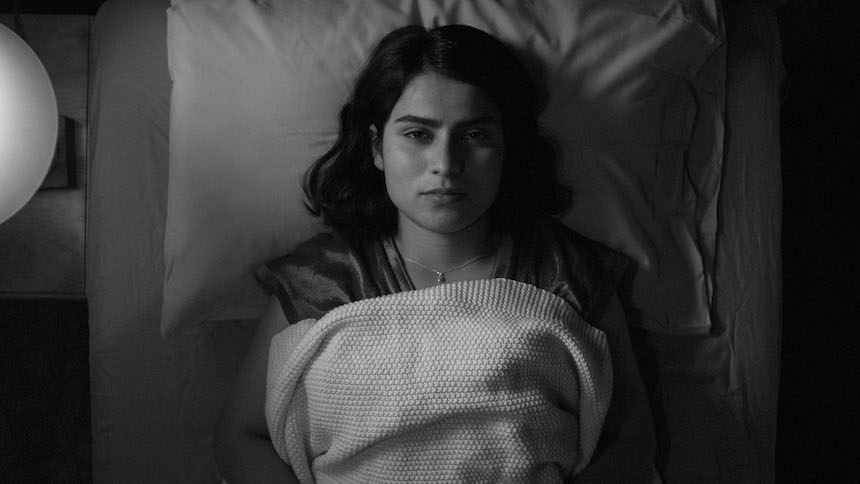 From its shimmering, luminous black-and-white photography, to its focus on marginal, outsider characters, and its casual, unhurried pacing, Fremont feels like, if not like an early, lost work of Jarmusch’s, then certainly one of his proteges eager to adopt Jarmusch’s minimalist film style to new subject matter undreamed of by Jarmusch himself.

Co-written with Carolina Cavalli, Fremont centers on Donya (Anaita Wali Zada), an Afghan translator and refugee relatively new to the United States, and the small, not quite thriving Afghan community housed on a city block in Fremont, a city of over 200K located in the San Francisco Bay Area. Seemingly abandoned by her U.S. handlers, Donya passes the time chatting with a wistful, nostalgic fellow Afghan refugee, Salim (Siddique Ahmed), and the family of another, Suleyman (Timur Nusratty). While Salim eagerly engages Donya in conversation, Suleyman either ignores her or dismisses her when Donya and Suleyman’s lonely, isolated wife, Mina (Taban Ibraz), talk in the courtyard.

From her tiny one-bedroom apartment in Fremont (a city more in name than actuality here), Donya ventures out to San Francisco during the daytime to work at a fortune cookie-making company in Chinatown. There, she navigates the usual workplace issues: an overly solicitous boss; a friendly co-worker, Joanna (Hilda Schmelling), eager for Donya’s friendship; and a job filled with routine and regularity. It's a stark counter to the dangerous life of an Afghan translator, pre- or post occupation by the United States and its remaining allies.

In a series of loosely connected scenes, Jalali teases Donya’s reticence and hesitancy less as a natural response to her new home or suffering from homesickness and more as a symptom or expression of a vast loneliness that bubbles under Donya’s seemingly placid surface. It’s just as obvious, however, that Donya’s loneliness isn’t unique. Everyone around her, including her boss, like her an immigrant, albeit decades earlier and under different circumstances, and, more specifically, Joanna, practically vibrates with aching, anguish-filled loneliness.

Not one to simply accept drifting through her new life without purpose or meaning, Donya arrives at a therapist’s appointment meant for Salim. Despite explanations to the contrary (i.e., why she can’t just swap with Salim), Donya holds her ground, convincing the unconventional therapist, Dr. Anthony (Gregg Turkington), to accept her as a regular patient, first so he can proscribe something for her insomnia, later as a much-needed opportunity to sort through her chaotic, unresolved feelings about Afghanistan, the U.S. (“the enemy”), and her role as a translator in a two-decade-long conflict.

Given its emphasis on everyday observation, Fremont doesn’t follow a traditional, three-act structure. Instead, it opts for an ebb-and-flow approach, always with Donya, a keenly self-aware young woman, weighing and balancing how to interact in and with her new surroundings.

In one affecting scene, Donya, wearing her best, likely only dress, practices the appropriate etiquette for a potential dinner in an unseen, possibly nonexistent environment. In another, Joanna and Donya share some time outside of work. It goes as awkwardly as expected, though Joanna, as lonely as Donya but for different reasons, pours her heart into her karaoke machine.

Buoyed by a charmingly winning performance by Zada, herself an Afghan refugee, Fremont trundles alone to a not unexpected, if not entirely unwelcome denouement involving Donya, venturing well outside her comfort zone (i.e., Bakersfield), meeting a shy, introspective mechanic, Daniel (Jeremy Allen White). Their halting, circular exchange, each filled with wanting and a desire for like-minded company, provides Fremont not only with one of its best scenes, but also one of its most poignant, suggesting that the universal need for human connection can trump cultural, ethnic, and historical differences.

Do you feel this content is inappropriate or infringes upon your rights? Click here to report it, or see our DMCA policy.
Anaita Wali ZadaBabak JalaliCarolina CavalliFremontGregg TurkingtonHilda SchmellingJeremy Allen White