Review: SKINAMARINK, The Dark Call Is Coming From Inside the House 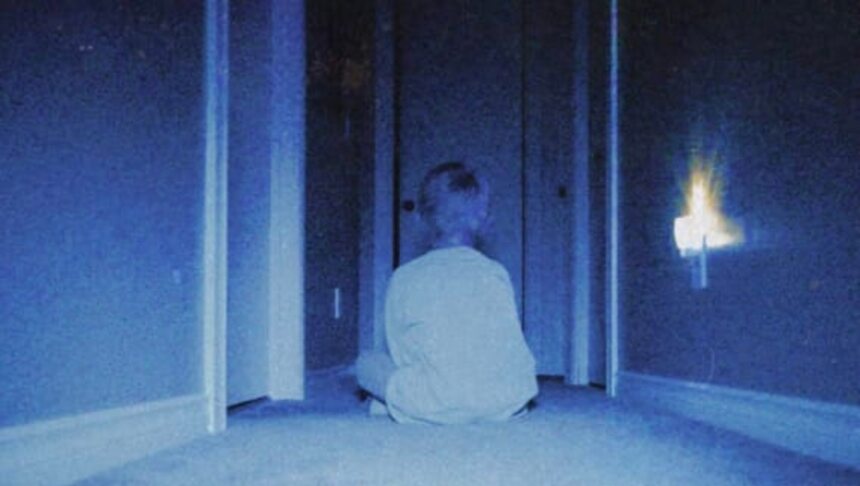 If you are a Canadian of a certain age, or perhaps are familiar with this particular children's tune, prepare to be scarred for life.

Well, I could really say that to anyone who watches Skinamarink. This both feels and looks like a nightmare of any child, and one that would keep haunting a person well into adulthood. The feature debut of Kyle Edward Ball, it takes its title from the children's song made famous by Canadian group Sharon Lois & Bram (and I certain recommend having a listen if you're unfamiliar, maybe after you've seen the film). It's an analog, distorted, whispering demon in your eyes and ears, one that takes its cue, as noted, from the perspective of a child and all the horrors they might envision should they find themselves utterly alone.

But how alone? Kaylee and Kevin, at first, seem to be at home, with both mother and father neaby. But when they wake in the night (why? by what?), they find that their father is missing, the front door and windows seem to have disappeared. Kaylee, as the older child, knows what to do when something is wrong: you call 911. But not even the phones work. So the children gather a few toys and blankets, and decide to camp out in the living room.

The nightmare has already begun, and it's a nightmare from Kaylee and Kevin's perspective. The graininess of print film, the not-quite-in-focus images suggest a child that is at once still half-asleep and yet awake to feel the creeping terror coming on. The sounds as well feel solid (Bell sets the film in 1995): there are VHS tapes and cassette tapes and even the sound a record makes if the needle doesn't retract when the music stops. This gives each shot, each movement of the camera a weight that gets heavier, as eyes that don't want to move for fear of what they might see.

And that fear transfers easily to the viewer. I don't know whether it would be more or less creepy to watch this at home as opposed to in a cinema - with the former, you might feel less at home as you watch, with the latter, you might be afraid to go home at all. The home is a sacred space: it's where we should feel the most safe, and yet, as many a horror film shows, it's often the sight of our deepest fears realized, especially when you don't know what is after you. Uncanniness (or 'unhomely' as is the more direct translation of the German term coined by Freud) is the central tone here, quite literally - this place is no longer a home, at least to Kaylee and Kevin.

Not only does Ball keel the camera strictly at the child's perspective (i.e. almost always low to the ground and looking up), but with that slowness of the dream-addled mind, the mind and heart in fear - they know they have to look under the bed, but they definitely don't want to. I'm sure a good number of viewers will, like me, spend a lot of time half-hiding their eyes behind a blanket. As a voice - is it coming from the mother? or from beyond the walls? tells Kevin to look under the bed, the camera moves so slowly - it is afraid, Kevin is afraid, and you look into that darkness just waiting for whatever might move or look or perhaps gnash its teeth at you.

We're never given anything quite so visceral as gore or blood, as this is not an attack; instead, the house seems to be moving into another dimension, or an alternate reality is slowly seeping through these walls, . But then, the analog nature of the sound and visual style lends the story a tactility of the objects too often ignored in horror: the feeling of carpet under bare feet approaching a dark room, the cool of painted walls, the background noise of old cartoons, the metal doorknob, the plastic of toys, the whir of the VHS tape, the lines when a VHS recording is unstable. These objects that are barely noticed from day or day, suddenly are at the forefront when they are all we can cling to of a slowly disintegrating reality.

I've perhaps used the word 'creepy' a lot in this review, but Skinamarink is the very definition of the word, and terrifying right down to your soul. Always keeping the child's perspective at the centre, it is a nightmare even to the adult mind, of the home and its inhabitants turned slowly inside out.

Skinamarink will be released in theatres in the USA, Canada, UK, and Australia, this Friday, January 13th, and later in the year on Shudder.

Do you feel this content is inappropriate or infringes upon your rights? Click here to report it, or see our DMCA policy.
Kyle Edward BallJaime HillLucas PaulRoss PaulHorror