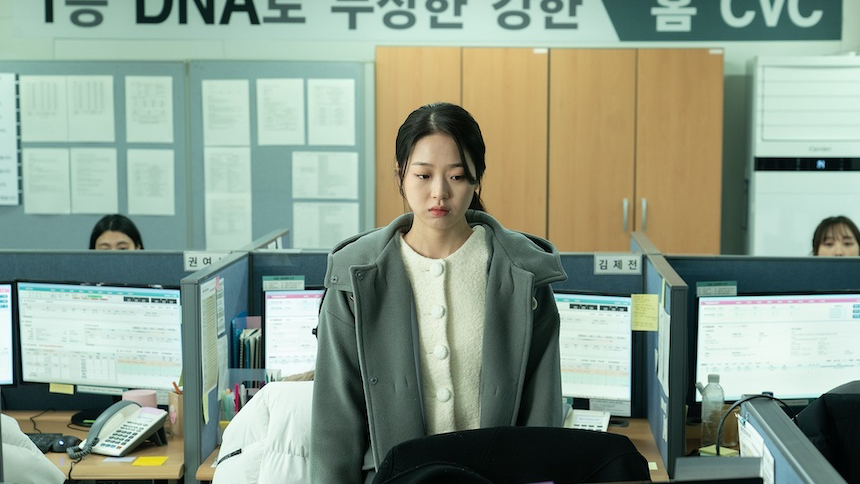 Good things come to those who wait, and so it is with Next Sohee, the blunt and powerful new film from director July Jung, which bowed at the Cannes Film Festival this spring, following eight years after her sensational debut, A Girl at My Door.

Teaming up once more with actress Bae Doona, Jung sets her sights on the systems and circumstances that contribute to workplace abuse, specifically young students who are taken advantage of by shady 'externship' programs.

Bad things, meanwhile, come in threes. High school student Sohee -- a splendid Kim Si-eun in her first major role -- is initially thrilled to be drafted into her school's 'externship' program, which places her in a job in a call center where she can earn her very first paycheck.

But after this auspicious start, Sohee's incipient life as a working adult unfolds into a quiet nightmare. Her promised salary incentives evaporate owing to arbitrary and endless fine print, an initially supportive superior cracks and kills himself, and Sohee's resultant recalcitrant attitude lands her in very hot water with her new boss.

All this is cause enough for her to take her own life, which she does on a grim and dismal day as she disappears into a nondescript watery grave. But that's only half the story in this arthouse investigative thriller that wears its naked fury on its sleeves.

The back half of the story is the investigation into Sohee's death. The cause of her demise is clear enough, but after her routine round of interviews, Detective Yoo-jin (Bae Doona) refuses to close the case as an open and shut suicide.

Partly driven by an unusual connection the two women share, a small flame ignites in Yoo-jin, as she seeks to uncover the abusive system that drove a youth like Sohee to end her life. As she steadily breaks her way through the system, only to find bigger walls, the flame within her magnifies into a blaze.

Next Sohee may be Jung's second film, but it's the first one where we feel she's in complete control, as her debut was notably produced by acclaimed Burning filmmaker Lee Chang-dong, whose presence could be felt in the finished product.

Along with Lee, gone is the previous film's polish and sensuality. In their stead remains a darker and more sprawling picture, with a forceful voice driving towards an aim in a precisely structured script.

The front and back sections of the film, with their different protagonists but otherwise similar supporting cast, complement each other well. Yoo-jin's investigation retraces Sohee's steps earlier in the film, and as our anger for her predicament is revived, we see our own feelings reflected in the detective, as she steadily loses her cool.

The element that does remain the same between the films is lead actress Bae Doona, once again playing a conflicted police officer -- incidentally a role she also played in Hirokazu Koreeda's Broker, the other film of hers that bowed at the Cannes Film Festival this year.

With a world-weariness in her eyes, Bae's Yoo-jin guides us through the twisted iniquities of local bureaucracy, slaloming through hampered hands and small-minded sycophants, all slaves to a hierarchical and patriarchal beast so broad and entrenched that it can welcome no change.

Despite their similar jobs and investigations, Yoo-jin and A Girl at My Door's Young-nam are very different creations, and both stand out as high-points in Bae's career.

There is no single villain in Next Sohee and consequently, Yoo-jin's investigation doesn't wind to a typically cathartic conclusion. To do so would be a betrayal of the story that's been told until then. This does mean that the film requires patience, if the 139 minute running didn't already make that clear, but after steadily ramping up its bleak story, this slowburn delivers in spades.

Do you feel this content is inappropriate or infringes upon your rights? Click here to report it, or see our DMCA policy.
Bae DoonaBIFFBusan international film festivalCannes Film FestivalexternshipJuly JungKim Si-eunworkplace abuse김시은다음소희배두나정주리