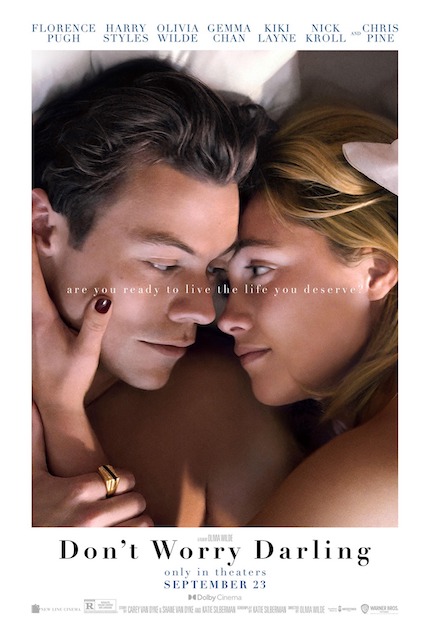 There’s a moment in Don’t Worry Darling, Olivia Wilde’s (Booksmart) second film as director, where the blandly named Jack Chambers (pop-singer-turned-actor Harry Styles) jumps onto a stage with a backing band to dance joylessly at the behest of the singularly named Frank (Chris Pine), the founder and CEO of the Victory Project, and the leader of the nearby company town closely modeled on mid-century Palm Srpings, California.

For Jack, dancing onstage functions to underline a much-coveted promotion. For Frank, it’s an opportunity to pull a little more firmly on Jack’s marionette strings, reminding Jack that Frank singularly retains the absolute right to exile Jack and his wife, Alice (Florence Pugh), from their socially engineered utopia, for real or perceived transgressions.

While Jack knowingly, consciously, and deliberately trades his freedom, integrity, and autonomy for the promise of a “better life,” a life defined by clearcut, inflexible gender roles (women function solely as housewives and mothers, men as husbands, fathers, and breadwinners), a consumption-oriented, materialist lifestyle, and unquestioned obedience to Frank’s platitudinous rules and messiah-like leadership, Alice, like the other women who inhabit the carefully manicured, pre-fabricated town, has no choice, agency, or autonomy.

She, like every woman virtually imprisoned in a company town isolated by desert and mountains, must follow the rules laid out by Frank: She can’t ask about Jack’s employment with the so-called Victory Project, can’t leave the town to visit Jack at the mysterious compound where he works on "developing progressive materials," and can’t question anything about their supposedly idyllic life together.

Except, of course, Alice does. She recognizes early on that she’s not in Wonderland. She’s not in Neverland or Oz for that matter, though she is, by one possible interpretation, through the looking glass. Jack’s conditional love come at a price she’s increasingly unwilling to pay: blind obedience to the Victory Project and its patriarchal structure. And when, after another long-tern resident, Margaret (KiKi Layne), suffers what appears to be a nervous breakdown, the same resident disappears permanently, Alice’s natural curiosity, not to mention concern for her departed acquaintance, starts to get the better of her.

Witnessing an object falling from the sky no one else apparently sees and attempting to find it in the nearby mountains only escalates Alice's growing sense of paranoia and claustrophobia. Worse, Alice's obviously erratic behavior brings her to Frank’s attention. Frank begins to see Alice as a potential threat, a destabilizing influence on the other residents and thus as obstacle to maintaining his idea of utopia.

Wilde and her screenwriter, Katie Silberman (Booksmart, Isn’t It Romantic, Set It Up), working from an original story credited to Silberman, Carey Van Dyke, and Shane Van Dyke, relies on a plot-as-mystery-box structure to keep the audience guessing as to the true identity of the Victory Project and presumably, interested in the answer. Unfortunately, the resolution to the mystery, the who, what, when, and where surrounding Alice’s peculiar entrapment, isn’t particularly novel, led alone engaging on a basic, fundamental level.

In fact, Don't Worry Darling leans into an overused and over-exploited premise that it should be permanently removed from a screenwriter's toolkit for the next half-century. By the time Alice uncovers the big, bad secrets behind the Victory Project — they're revealed all at once in tiresome, listless fashion — even a half-awake, slightly bored audience will be three or four steps ahead of both Alice and the film itself.

The shrug-worthy revelations aren't exactly surprising; far from it, actually. To be fair, neither is Pugh’s undeniably enthralling, layered performance as a woman slowly losing her sanity to an epic gaslighting campaign or Pine as the charmingly low-key cult leader and Alice’s central antagonist.

Despite a fluctuating accent and over-emphasized line readings, Styles delivers a credibly believable performance without the need to grade on the usual singer-to-actor curve, while the remainder of the cast fill out their often sketchy, underwritten roles with the expected level of professionalism and dedication to their craft.

On its own, the natural curiosity about Styles's performance doesn't qualify as a sufficient reason to see Don’t Worry Darling, but at least for its first hour, it’s easy for moviegoers to lose themselves in the meticulously reconstructed mid-century homes nestled inside a cleanly organized, planned community (modeled on Palm Springs, California), and costume design that feels simultaneously   specific to an idealized, deracialized version of the 1950s and timelessly transcendent.

Ultimately, though, eye-catching, style-heavy, substance-free visuals aren't enough to elevate an underwhelming, over-familiar story, surface-deep pro-feminist themes, or painfully predictable revelations about the nature of the Victory Project and Alice's role/function in that project. Once Don't Worry Darling divulges all of its secrets, moviegoers will begin clock-watching, eagerly anticipating the moment the end credits arrive and they can head for the exits.