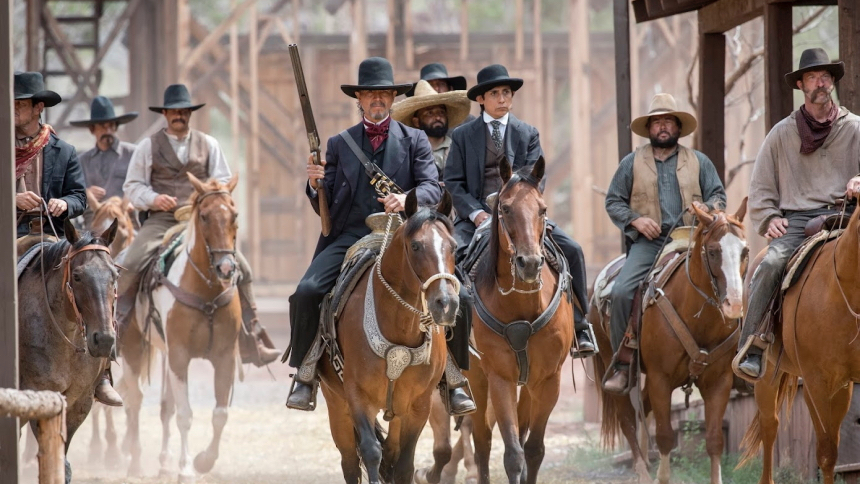 In his 1962 essay, "White Elephant Art vs. Termite Art," critic Manny Farber comes firmly down on the side of filmmakers and actors who are completely at odds with the zeitgeist or trends, and nibble away at the edges of genre and ever present B-Film tropes and ideas with skill and verve. He called this kind of filmmaking (or journalism, or painting for that matter) Termite Art.

I am not sure what position Farber would take on Walter Hill's latest film, a simmering small budgeted Western shot in Santa Fe, New Mexico, with a talented and diverse set of character actors all spinning slowly, spokes on familiar axis of the classic American Western. Dead for A Dollar is dedicated to Budd Boetticher, perhaps the ultimate Termite Artist, who churned out several modest Westerns around the time the genre was waning -- before Sergio Leone and the Italians breathed a gritty new life into things -- and Farber was penning his thoughts, although Boetticher is not directly referenced in the essay.

Suffice it to say, it is nice to see Hill return to the Western, a genre he has dabbled in often over his lengthy career, particularly in the early 1990s when he did a wildly diverse trio of them (Wild Bill, Last Man Standing, and Geronimo), before moving the road-show to television with the HBO Deadwood pilot and later Broken Trails. Aesthetically, Hill seems to be stuck in the latter television ‘quick-and-dirty mentality’ of a few sets for the actors to walk and talk, and some wide-screen establishing shots.

The honey-coloured filter slathered over everything flattens the scope of the film. Admittedly, the bulk of the film does take place in one town, but the opening act begins in the Santa Fe badlands, and then heads gently towards the big-canvas tracts of the open desert of Chihuahua, New Mexico. Contrast this to the larger vistas (the White Elephants as it were) of the Coen Brothers’ True Grit or Tarantino’s Django: Unchained, both showy, handsome block-buster remakes, and you can see the difference a hefty budget makes.

I bring up Django also because Dead for A Dollar stars Christoph Waltz. As practical (and practically civilized) bounty hunter Max Borlund, Waltz handily side-steps comparisons to his paternalistic European gentleman in the Tarantinoverse, and at one point, here, declares himself not as an old world immigrant, but simply as an American.

It’s a grittier, less flamboyant performance than Waltz typically offers on screen. Borlund is a worldly, but solitary man (of no vices) operating at the tail end of the 19th century, who has made enemies during his career. This including Joe Cribbens a gambler, murder and horse-thief played with casual swagger and dirty grace by Willem Dafoe.

The film opens with Cribbens about to get released from jail, and Borlund pays him a visit in his cell to…I am not exactly sure why. Antagonize him? Remind him to go straight and narrow? To come to a gentleman’s understanding that it was just business? Cribbens is ambiguous about any thirst for revenge, but everyone watching knows how Westerns work, right?

Shortly thereafter, Cribbens gets a call to a remote meeting with military and business interests to track down a deserting enlisted man who stole a politician’s wife and fled to Mexico. Cribbens takes the cash advance, the job, and a sharp shooting Buffalo Soldier as a hired hand. Nothing is simple here, as Hill contrasts the sizable casts of individual stories (and the lies they tell themselves) on top of each other in a Gordian knot of racial tensions (the deserter and wife stealer is a Black man), codes of honour and professionalism, and personal power plays.

This is a film that is very talky, and separates the conversations and schemes with classic fades to black or directional wipes that contrast strangely with digital photography and a healthy number of drone shots. It is a strange beast, compelling because the actors are compelling and the story favours a low kind of key story-density (Shakespeare is name checked at one point by Borlund) over the more modern style for style's sake, and overbearing simplicity of something like the callow Netflix filmmaking-by-algorithm of The Harder They Fall.

Take, for instance, Benjamin Bratt, who I have not seen in anything since his heyday in the late 1990s (Red Planet, Traffic & Miss Congeniality in the same year), who absolutely aces the Mexican land-owner-cum-gangster with a flamboyant handle, Tyberio Vargas. Bratt is grizzled and commanding presence and a delight to watch. Vargas’ sycophantic lawyer, is played by Luis Chávez, who channels a different kind of energy equally compelling.

Rachel Brosnahan (Prime Video’s The Marvelous Mrs. Maisel) brings a strong, very modern, woman who uses her dignity, her sex, and her small pistol to chart her own path. Is she with the deserter Eljiah (Brandon Scott) out of love, or expedience, or just to bring down her arrogant politico husband (Hamish Linklater) because he is a shite husband? Elijah wants to get to Cuba and leave everything about America behind, but Rachel's motives are more ambiguous and ambivalent. She also has an appetite for the finer things of her status and wealth.

Things culminate (slowly, deliberately) in Trinidad Maria, a sleepy village (and painfully obvious film set) with an overly evocative name. It exists on the lands of Vargas’ sprawling estate, complete with its own wonderful collection of denizens, including lawmen, both of the honorable and corrupt variety, a fiery innkeeper, a chill bartender, cocky businessmen, gamblers, and even an oddball bone-saw doc of the Brad Dourif variety. Deadwood fans should delight in all this attention to detail, even though the various tangents and fleshing out distracts, and decidedly dilutes, the urgency or momentum of the story.

The requisite slow-zoom stare-downs, stand-offs, and shoot-outs are peppered throughout, and workmanlike. The violence is grounded on a firmer, far less showy, realism than most modern (or even Hollywood classic) takes on the genre. The varied agendas and motives of the characters hold more of the cameras focus.

There is a cracking good bullwhip fight that hints toward Dead for a Dollar to own up to its Spaghetti Western sounding title, but it remains one of the precious few fresh aspects that Hill brings to the table here. Instead, in his termite-like fashion, he is content to nibble around the edges of what a B-side oater could look like in 2022. On second thought, Farber would have enjoyed this one.

Dead for A Dollar