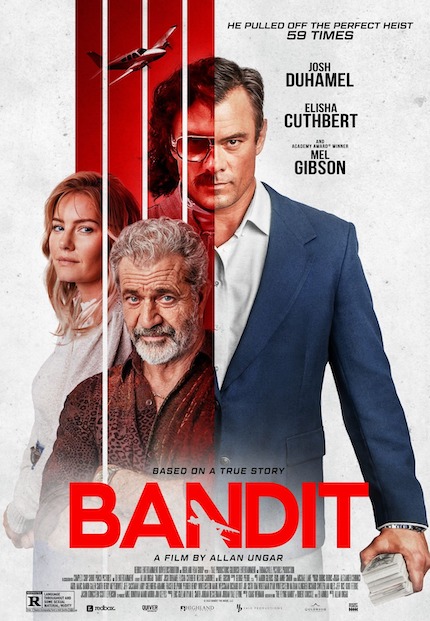 Everyone in Canada is so darn polite!

Bandit
The film is now available via various Video On Demand platforms.

Breaking out from a minimum-security penal facility in his native U.S. and immediately heading north into Canada to conceal his true identity, Robert Whiteman (Josh Duhamel) is an amiable and friendly fellow. Yet his status as an escaped fugitive keeps him from making any friends until Andrea (Elisha Cuthbert) shows him kindness one night.

Working the night shift at a church's homeless shelter has made her understandably suspicious about Robert's easy charms. Even so, his friendly demeanor gradually wears her down, such that she agrees to go out with him. From there, the relationship progresses and soon Andrea is pregnant with Robert's child. Without any visible means of support, how will they survive?

Having begun in media res as Robert is committing a bank robbery, director Allan Ungar (Gridlocked, 2015; Tapped Out, 2014) passes time comfortably by showing Robert's gradual development into an extremely clever thief who doesn't want to hurt anybody; he just wants to provide for his family, and robbing banks seems to be the easiest way to do that.

As wonderfully portrayed by Josh Duhamel as the ultimate 'nice guy who wouldn't hurt a fly,' Robert is contrasted nicely with a local loan shark. Tommy (Mel Gibson) has a loud bark but is actually a pretty nice guy who just happens to own a strip club and regularly admonishes debtors to be regular in their payments by inflicting pain upon them to remind them. He is not portrayed as a monster, though, or even excessively violent, beyond what the situation appears to call for. Is it appropriate to call him a very nice mobster?

Like all the Canadian people in the movie, Robert and Andrea and Tommy are extremely polite. Even Snydes (Nestor Carbonell), a local police detective who becomes obsessed with Robert, is polite, in between flinging f-words at people like shallow darts. Since he doesn't appear at all threatening, he curses constantly, using f-words like a six-shooter to express his frustration, anger, and dismay. (As a side note, I love that Carbonell is comfortable enough to make fun of his own "eyeliner" look, which has been a running joke since his Lost days.)

The movie's tone is entirely pleasant and agreeable. Duhamel and Cuthbert make for a well-matched couple who are comfortable with each other. Gibson gets a couple scenes that reminded me of his ability to toss off lines with deeper, personal meaning.

Evidently, Canada in the 1980s was a much more friendly environment for bank robbers to ply their trade; almost no one seems terribly bothered by what Robert is doing, shrugging their shoulders at all his criminal activities. It makes for a very relaxed and often hilarious look at life as a bank robber.

Do you feel this content is inappropriate or infringes upon your rights? Click here to report it, or see our DMCA policy.
Allan UngarCanadaElisha CuthbertJosh DuhamelMel GibsonNestor CarbonellUS