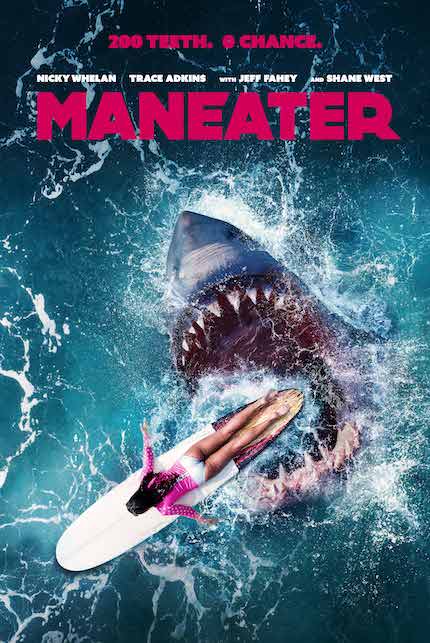 Today's menu: sun, surf and screaming. There will be blood.

Maneater
The film will be available in theaters, on digital and on demand August 26, 2022 from Saban Films.

Nursing a broken heart, medical student Jessie (Nikki Whelan) is persuaded by her friends to join them on vacation. Nothing could be better than a week of sunshine and pleasant company to lift her spirits. But her friends didn't count on the presence of an extremely nasty shark, lurking just offshore.

Writer and director Justin Lee completed nine films from 2018 to 2021, and has completed another five that are due for release this year, including Maneater. Clearly, he can work within a limited budget, probably on a tight schedule, and still produce an entertaining film that satisfies the perpetual itch of action-movie fans who always demand more, more, more. Maneater may resemble "product," churned out in a cinematic factory, yet it moves at a brisk pace and features likable performances by likable actors.

Nikki Whelan stars as Jessie, whose friends -- Porscha Coleman, Shane West, Zoe Cipres, Kelly Lynn Reiter and Alex Farnham -- unite around her to cheer and support her during a difficult time of her life. She may be a reluctant recipient of their help, but she makes it apparent that she genuinely appreciates what they are doing.

They hire a boat, captained by Ed Morrone and accompanied by local guide Kim DeLonghi, which deposits them on a beautiful island where they can fully enjoy a day and night of bliss. As the opening moments have shown, however, a shark lurks in the waters nearby, and it's not long before it's claimed another victim, the daughter of local fisherman Harlan (Trace Adkins), who becomes determined to kill the shark by himself after the ineffectual authorities fail to do so.

As someone whose young adulthood was permanently scarred by Jaws (1975), I've always had a fondness for shark movies (Blue Water, White Death is another favorite). That's probably why I have such a soft spot for Maneater, even though the effects consist largely of a CGI shark that is rarely in the frame with any (human) actors. It's a fun flick that feels like the fading rays of summer in our North American summer.

Do you feel this content is inappropriate or infringes upon your rights? Click here to report it, or see our DMCA policy.
Justin LeeNikki WhelanSaban Filmsshark moviesTrace AdkinsUS