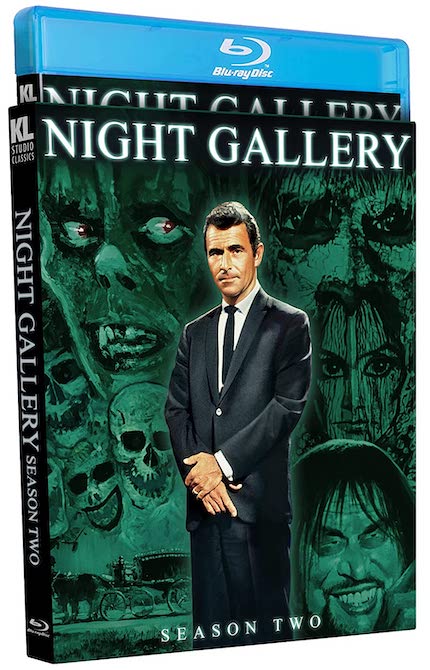 I won’t quibble. Yes, we live in a golden age of horror television.

There are so many horror series available for streaming, you’d drown in special effects blood long before you were able to binge watch them all. So maybe I can forgive you if haven’t heard of Night Gallery.

But those of us who were digging up costly bootlegs long before YouTube not only know about Night Gallery, it is an indelible part of our creature-feature consciousness. Notice, I mentioned bootlegs. I’m talking VHS bootlegs, whippersnapper. None of this DVD shit. Grainy, out of focus, warbly sounding bootlegs.

It was all worth sitting through if you could just go back in time to have the holy hell scared out of you by Rod Serling and his incredible stories. It didn’t matter that you’d already seen them when they broadcast. They still had the power to make you wish you’d been watching with the lights on.

Like Twilight Zone (God help you if you haven’t heard of that), Night Gallery was an anthology show hosted by Rod Serling, who would wander around a shadowy art gallery giving up the stories behind the artworks. It ran for three seasons from 1970-1973. Rather than a focus on science fiction with an occasional nod to horror, Night Gallery was almost entirely horror-based, with only the occasional bit of dark fantasy thrown in.

The quality of the stuff in Season 2 is just staggering. I’ll try to point out some examples, but Night Gallery was created by a who’s who of brilliant performers, writers and directors. Picking episodes to talk about is difficult at best. For every good one I tell you about, there are two more that are just about as good.

The Boy Who Predicted Earthquakes stars then-child actor Clint Howard as an unassuming young man granted a TV show because of his ability to see into the future. But a gift some see as a gravy train takes on jet black dimensions when he is unable to share his latest vision. Director John Badham (Dracula [1979], War Games [1983]) ratchets up the intensity, leading to an unnerving finish

Class of 99 sees Vincent Price as an instructor drilling his graduates on the mechanics of human relations. But when the questions begin to explore the darker corners of the human heart, a struggle for the definition of what makes a man a man takes unexpected and shocking shape. Not only is Price at his threatening best here, but he’s well supported by the direction of Jeannot Szwarc, who makes the spare, futuristic sets and dialogue echo with tension.

A Fear of Spiders verges on the comedic, yet even as a comedy, it offers cold, cruel entertainment. Patrick O’Neal plays a misanthropic food critic with two problems. One is an infatuated neighbor played by Kim Stanley who won’t take no for an answer and the other is the sudden appearance of spiders in his posh apartment, spiders that seem to grow in size with every new sighting. Directed by John Astin (better known as Gomez from The Addams Family TV show of the 60s), the invective flows, and anyone who finds spiders unsettling will be checking around doors in their house to make sure nothing has crawled out of the woodwork.

In Big Surprise, a band of pesky kids pick the wrong lawn to trespass on. The crusty old man who lives there (played with relish by the legendary John Carradine) tells them to dig under an old remote oak tree for a big surprise. They set to work, backs aching under the sun, and strength waning by dusk. Who will stay and dig? Who will get the big surprise? It's based on a short story by Richard Matheson.

In Sins of the Father, we learn about the medieval sin eater, a man who eats banquets off of corpses, absorbing their sins in the process. But what happens when the sin eater is sick?

This is one of two Night Gallery episodes repeatedly voted as the scariest things ever shown on network TV. The cast is phenomenal. Horror legend Barbara Steele (Black Sunday), the great Michael Dunn (The Wild Wild West), Geraldine Page and Richard Thomas (The Waltons)  are just the tip of the talent ice berg here. Go look up the credits on most of the actors in this episode and you’ll see  enough film and TV history to keep you busy for a long time.