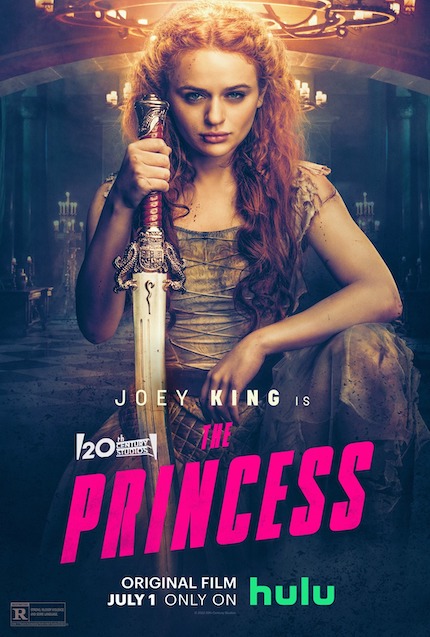 The Princess
The movie premieres Friday, July 1 on Hulu in the U.S. and Star+ everywhere else in the world.

Having only seen Joey King as a likable teenage heroine in Netflix rom-coms, it's hard for me to buy her as an ass-kicking Middle Ages princess.

Strapped into a furiously busy action movie directed by Vietnamese filmmaker Le-Van Kiet (Furie) , though, often accompanied by the great Veronica Ngo (also the star of Furie), goes a long way toward making The Princess a very enjoyable piece of Saturday afternoon fluff, only the kind you can watch at any time of day on any day of the week. (Oh, the wonders of streaming!)

As soon established, after a requisite opening that is overstuffed with incredible moves by Joey King and, presumably, a squadron of talented martial artists and stunt performers, The Princess (Joey King) has been promised in marriage by her father, The King (Ed Stoppard), to the duplicitous Julius (Dominic Cooper), who aims to become King himself no matter what happens, so he can give the people what they need: an evil tyrant as their supreme ruler.

Scripted by Ben Lustig and Jake Thornton, The Princess exists as a vehicle for Joey King to demonstrate that she is more than just a pretty face. She supplies the necessary melodramatics to satisfy her rom-com devotees, I imagine, but, of greater importance, she takes things seriously, killing her enemies willy-nilly, early and often, splashing blood, cutting limbs and necks, so that her white wedding becomes soaked in red to a convincing degree.

Then Linh (Veronica Ngo), who trained The Princess and continues to serve as her mentor, overcomes her captors to join the younger woman in battle against all the Evil Dudes, plus one Nasty Lady, Moira (played by the criminally underrated Olga Krylenko), who is Evil through and through, and, frankly, more convincing in her evil conduct than her leader, Julius. Unfortunately, Dominic Cooper is not entirely convincing as someone who actually does bad things himself; he's more likely to be someone who gives orders and expects them to be followed without question.

No matter. The Princess knows what it is and embraces its action-movie identity wholeheartedly, wisely keeping to a swiftly-moving 90-or so minute timeline in which no one ever watches the clock, because they're having too much fun watching the very fun action movie to care about such things.

Do you feel this content is inappropriate or infringes upon your rights? Click here to report it, or see our DMCA policy.
Dominic CooperHuluJoey KingLe-Van KietUSVeronica Ngo