Review: PAPER GIRLS, Your Delivery Will Be Delayed 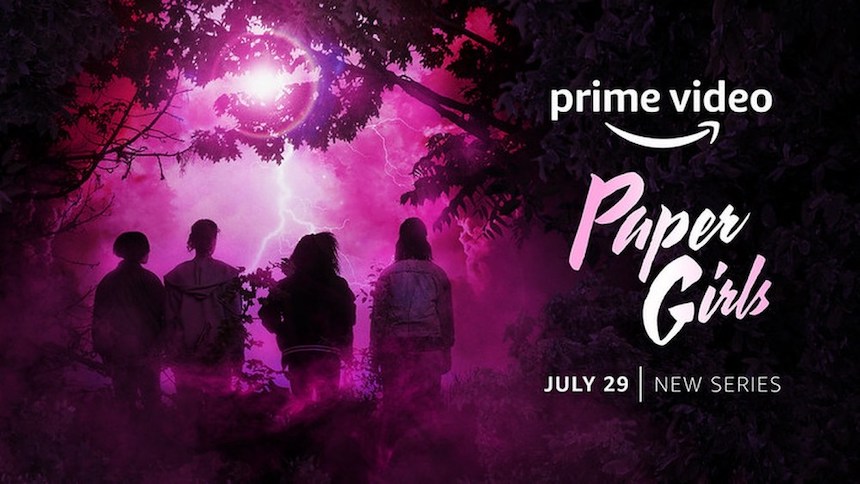 What is the golden age of science fiction? 12. *

On November 1, 1988, four girls, all aged 12, meet early in the morning to begin their work as newspaper delivery people in a small town outside of Cleveland, Ohio. Before the day ends, they have all been whisked off to the future.

The girls -- Erin (Riley Lai Nelet), Mac (Sofia Rosinsky), Tiffany (Camryn Jones) and KJ (Fina Strazza) -- come from diverse backgrounds, though they share a similar, profanity-laden voice that delights in spouting obscenities, typical of young people who think that it makes them sound more adult. (Frankly, the adults in this series also spout frequent obscenities, so it seems they haven't learned much; we don't all spout frequent obscenities.)

In this particular time-traveling scenario, the girls are caught up in a battle between the forces of good and evil. More to the point of the series, they also confront their future identities, including Adult Erin (Ali Wong) and Adult Tiffany (Sekai Abeni), which are definitely not what the girls imagined they would be as adults.

Written by Brian K. Vaughan and illustrated by Cliff Chiang, Paper Girls was first published by Image Comics in October 2015. The 30-issue series concluded in July 2019, which is also when an adaptation for television was announced, with Stephany Folsom (Toy Story 4 co-writer) set to write. Later, Folsom was announced as one of three showrunners, alongside Halt and Catch Fire scribes/producers Christopher Cantwell and Christopher C. Rogers. About midway through production on the series last year, Folsom departed as co-showrunner, and Rogers took over as sole showrunner.

As realized in the series, the girls are likably spunky, if not instantly lovable, in large part because they don't love their own identities yet. That may be the strength of the series, too: they need to learn to love themselves, and that takes time, more time than anyone realizes at the age of 12.

When you're caught up unwillingly in a battle that may define the course of the future, of course, you don't have the time you need to do that. The visual effects supplement the story, which also comes to include adult characters on the side of good and evil, namely Larry (Nate Corddry) and Prioress (Adine Porter). The series moves at a pace that allows for the characterizations to develop reasonably and naturally, given the time-traveling elements that threaten everyone's existence.

Paper Girls is set to debut two new episodes per week, which feels like a good schedule. It's an enjoyable show, if not instantly compelling.

* Defined by Isaac Asimov in his introduction to the anthology he edited, Before the Golden Age, first published in 1974.